Miller Children’s & Women’s is One of Only Two U.S. Hospitals to Offer ExcelsiusGPS for Kids

Matthew Hayes has been skateboarding since he was 2-years-old. At 14, he took a big spill, landing on his arm. His mom Krissie took him to the emergency department. On an imaging scan, Krissie noticed that his spine looked to be curving. She was told to follow up with their primary care physician.

In the following weeks, Matthew seemed fine, but within a few months, his body started changing drastically and he began walking with a limp. That’s when Krissie knew she needed an expert – and fast.

The scans revealed a 74-degree curve. A curve of at least 70 degrees is considered severe scoliosis. At this stage, there is a greater risk for the spine’s curve to cause the rib cage to eventually twist so much that heart and lung function can be affected.

The scan also revealed an excessive outward curve of the spine, known as kyphosis. Matthew was diagnosed with congenital kyphoscoliosis. People with kyphoscoliosis have a spine that curves both to the side and forward or backward at the same time.

For severe cases like Matthew’s, the only way to correct it is surgery. Dr. Cunningham recommended using the latest robotic-surgery technology, ExcelsiusGPS®, to perform a spinal fusion to straighten Matthew’s spine.

During a spinal fusion, bone or a bonelike material is placed within the space between two spinal vertebrae. Metal plates, screws and rods may be used to hold the vertebrae together, so they can heal into one solid unit.

“We have a small margin for error as we navigate a narrow space to place the spinal screws,” says Dr. Cunningham. “On either side are ‘danger elements,’ including delicate nerves that can be damaged. With ExcelsiusGPS, we’re able to be exact every time, increasing accuracy and safety.”

Miller Children’s & Women’s is the only children’s hospital in California and one of only a few hospitals in the U.S. to offer ExcelsiusGPS.

“Dr. Cunningham assured me that the robot wasn’t doing the surgery, but was guiding him,” says Krissie. “I was very confident in the way it was presented to us and felt that any option that gave Matthew the best possible outcome couldn’t hurt.”

Matthew underwent a staged procedure with the first portion performed on Sept. 3, 2020. During that procedure, the ExcelsiusGPS robot was used to guide placement of pedicle screws despite the severity of Matthew’s deformity. He then underwent a second stage procedure to decompress his spinal cord, remove two vertebrae at the apex of his deformity and gradually correct his deformity. Five spinal fusion rods were placed on the sides of Matthew’s spine for stabilization. 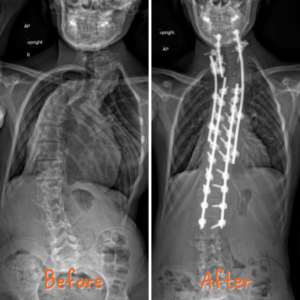 Recovering from spine surgery can be challenging, so for two weeks following his surgeries, Matthew recovered in the Cherese Mari Laulhere Pediatric Intensive Care Unit at Miller Children’s & Women’s. However, because of the COVID-19 pandemic, visitation was limited. While Krissie could be with Matthew, he had two other siblings who weren’t able to see him.

“It was hard on all of us, but everyone was amazing,” says Krissie. “I don’t think it would’ve gone as well without them. I felt so secure with them caring for my son if I had to step away.”

Once he was home, recovery continued. Matthew received hyperbaric oxygen therapy, which is a treatment that uses highly pressurized oxygen in a hyperbaric chamber. It has been shown to lower surgical site infections and other complications after spine surgery.

He also began physical therapy to help with the pain and strengthen his back. His physical therapy will continue as recovery from spine surgery can be a long process, but he is back to walking and moving independently – and most importantly the severe curve in his spine is gone.

“Matthew is a very strong kid,” says Krissie. “Even though he was a trooper, this was still a scary process. Dr. Cunningham, our orthopedic nurse Kathie, and the entire team were with us the whole way. I’m so glad it was at Miller Children’s & Women’s and not anywhere else.”