With just six games left in the season, the Los Angeles Kings find themselves in the midst of a competitive battle for a playoff spot. Having last made the playoffs in the 2017-18 season, the Kings have since retooled and rebuilt a talented roster filled with veteran leadership and young skill.

The Kings have sat in a playoff position over the last couple of months, battling it out with the Edmonton Oilers and Vegas Golden Knights for the last two spots in the Pacific Division.

In his third year as the head coach of the Kings, Todd McLellan finds the Kings right where they belong in the process of getting back to where the organization wants to be – contending for the playoffs.

“I thought that we could [be in this position],” he said. “The first year was tear down, the second year was a strange year [with the COVID-19 season], but if it was a normal year, you start to clean things up. Now, you’re beginning to stabilize. Tear down, build a little bit, stabilize and then begin to push. We’re in that stabilize period right now and maybe we can move forward and start to push, maybe we’re already doing that, I don’t know. We’re certainly on that time frame, or that plan, we’ve moved the needle past two stages already.”

During the Kings’ four-year absence from the playoffs, the team acquired a high quantity of draft picks, along with young, high-end prospects who are now beginning to enter the NHL with an impact. With an integration of youth, key pieces remain from the Kings’ two Stanley Cups in 2011-12 and 2013-14, giving the team a solid combination of players in various stages of their career.

Starting with captain and first-line center Anze Kopitar, the Slovenian-born center continues to produce and has led the Kings in scoring 13 of the last 14 seasons. This season, Kopitar again leads the Kings with 61 points (18-43=61) through 74 games.

Two further additions to the lineup this season have carried the Kings scoring depth. In their first year with the Kings, Viktor Arvidsson and Phillip Danault have each put together 20-goal seasons. It is the first time since the 1999-00 season that two offseason acquisitions have each produced 20 goals in their first season with the Kings. 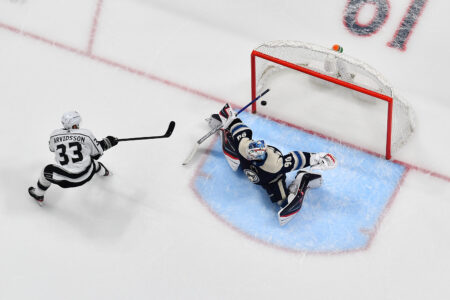 Viktor Arvidsson #33 of the Los Angeles Kings scores the overtime game-winning goal against Elvis Merzlikins #90 of the Columbus Blue Jackets at Nationwide Arena on March 4, 2022 in Columbus, Ohio. (Photo by Ben Jackson/NHLI via Getty Images)

With external additions like Arvidsson and Danault focused on building a deeper scoring team, one player has emerged internally to complement the acquisitions – Thousand Oaks, CA native Trevor Moore. 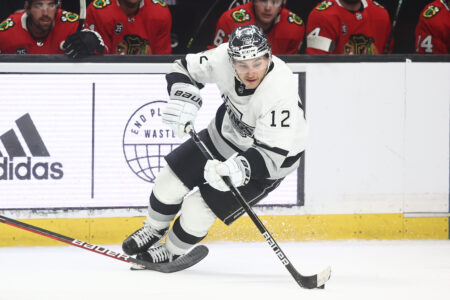 Trevor Moore #12 of the Los Angeles Kings skates with puck during the first period against the Chicago Blackhawks at Crypto.com Arena on March 24, 2022 in Los Angeles, California. (Photo by Will Navarro/NHLI via Getty Images)

Moore, who grew up playing his youth hockey in the greater Los Angeles area, has found a home and a consistent role playing on the second line, for the team he grew up watching as a fan himself. Moore has been an integral piece to the Kings efficient offense, providing it in a multitude of areas including the penalty kill. Moore currently leads the NHL with five shorthanded goals and leads the Kings in points since the turn of the calendar, having scored 37 points (11-26-37) over the last 42 games since January 1st.

“We’ve moved [Moore] around, we put him with different people, he was like our swiss-army knife and now he’s found a home,” McLellan explained. “He’s been productive with Arvidsson and Danault, that line has an identity and they play extremely well. I never really see him tired; he’s got an engine that’s second to none. I’m really happy for him and I’m glad that our group has him.” 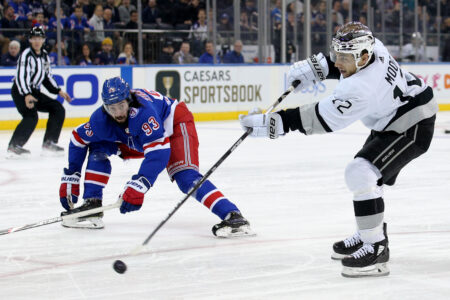 Trevor Moore #12 of the Los Angeles Kings shoots the puck in front of Mika Zibanejad #93 of the New York Rangers during the third period at Madison Square Garden on January 24, 2022 in New York City. (Photo by Brad Penner/Getty Images)

Down to the final six games in the regular season, the Kings veterans and youth will have to secure a playoff berth without the skill and leadership of their top defenseman, two-time Stanley Cup champion Drew Doughty, who underwent successful wrist surgery on April 11. Doughty is out for the season but expected to be fully recovered for next season.

The extended absence of Doughty, along with several others in the second half of the season, has given others the opportunity to step in and play in meaningful NHL games down the stretch. The young prospects, high-profile draft picks and offseason acquisitions are in the position they wanted to be in. Now, with just a handful of games left on the schedule, it’s time to finish the job.

The Kings have an important fight to the finish over the next two weeks. Every game is important down the stretch, with the team already playing games with playoff level intensity and implications.

“We need to go through these moments so that we will be better down the road for that,” McLellan said. “This is the playoffs for us and we’ve shown signs of growth during it. It’s going to have to continue for whatever we have left.”

How the next six games shake out will determine whether or not we see at more hockey in Los Angeles this spring.

You can catch the Kings at Crypto.com Arena in Los Angeles three more times this season, as they continue to push for the playoffs. The Kings are scheduled to host the Columbus Blue Jackets on Saturday, April 16, the Chicago Blackhawks on Thursday, April 21 and the Anaheim Ducks on Saturday, April 23, with all three games set to begin at 7:30 PM.

Visit LAKings.com/Tickets for more information on attending the final three games of the season!