Catalyst Cannabis Co. is coming to downtown Long Beach and, like everything this unique business does, the expectation is that it’s arrival will be transformative.

“We’re going to uplift the entire block,” Catalyst CEO Elliot Lewis predicts when Catalyst opens its doors at 433 Pine Ave. this month. The business is just awaiting final licensing approvals from the City before it opens what Lewis calls his “flagship” store.

This will be the 6th brick and mortar dispensary under the Catalyst name (the other Long Beach locations are on 2nd Street in Belmont, on Cherry Avenue and on 10th Street, as well as in Santa Ana and Bellflower). For Lewis, a Long Beach native, this location is a passion project.

The drywall is installed, the landscaping is planted and all that’s left to do is to welcome customers.

But Lewis’ vision extends beyond the storefront to the community that surrounds it. He’s been working closely with nearby residents and businesses to help plan events, like a pop-up art gallery, live music and cultural celebrations, for the block.

Catalyst has a different business model than most cannabis stores. Given that the company name means “agent of change,” it’s no surprise that Catalyst takes a distinct approach compared to others in the industry.

Take, for example, the four pillars of Catalyst’s business model: Community outreach, social equity and fire weed at fire prices. Catalyst supports women by highlighting a different woman-owned brand on Wednesdays. It is also a strong union supporter and works with the United Food and Commercial Workers Union to offer union jobs that provide employees with good pay and benefits.

“We’re trying to redefine the way the cannabis business is done,” Lewis said. “The younger generations are socially conscious and care about buying from companies that are, too. It’s important to have a good menu with good prices but, ultimately, our customers are interested in supporting businesses whose employees contribute to the community… not those who are off on an island, wearing a Rolex and counting their money.”

Catalyst sells a variety of cannabis products, from edibles and flowers to pre-rolled and concentrates from a variety of brands. While the cannabis brings people in the door, it’s the customer service that keeps them coming back, Lewis said.

When asked what he’s most proud of, Lewis doesn’t talk about Catalyst’s success, the partnerships he’s forged with cities or even his expansion plans — he discusses the beach clean-ups, food pantries and legal justice clinics he and Catalyst employees volunteer for, along with many other community organizations Catalyst supports. “We’re promoting a culture of volunteerism,” he said, noting that potential employees interviewing for positions at the new Pine Avenue location must show a willingness to get involved in community outreach.

The desire to give back runs deep for Lewis, who often brings his wife and four children, ranging in age from 5 to 12, with him for weekend volunteer work. “It’s good for them to see people modeling integrity, honesty and service just as they need to see there are people in need who we can help.”

He knows there is marketing and political value in contributing to his community, and he doesn’t try to pretend he doesn’t know. Lewis is, after all, a business man. But, whether it’s by bringing toys to children or selling to a satisfied customer, Lewis said he is most fulfilled when he is helping others. 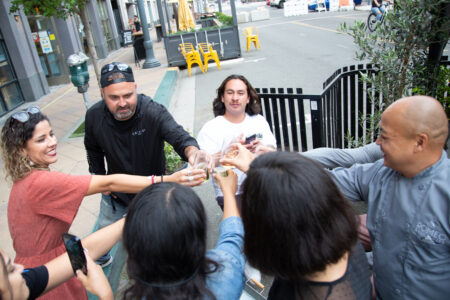 Success has not come without knocks. From disagreements with his industry peers on the best approach to working with cities to disputes with partnerships to overcoming COVID-19 issues, Lewis has faced plenty of challenges. He is looking ahead and not behind, though, with much anticipation for Catalyst’s future.

“I don’t consider this work, I love it,” Lewis said. “I’m excited to every day to make #WeedForThePeople a reality.”