Where every plot has a story, the Historical Society of Long Beach presents its annual Historical Cemetery Tour - Studio LBP FOR A LIMITED TIME: Make a tax-deductible donation to support our investigative reporting. GIVE NOW
- ADVERTISEMENT -

This year is the twenty-fifth time the Historical Society of Long Beach (HSLB) will present its annual Historical Cemetery Tour. The unique event features costumed actors telling Long Beach history from the perspectives of those buried in Sunnyside and Municipal cemeteries along with displays and interactive presentations. With more than 20,000 people buried there, there is no shortage of stories to tell. 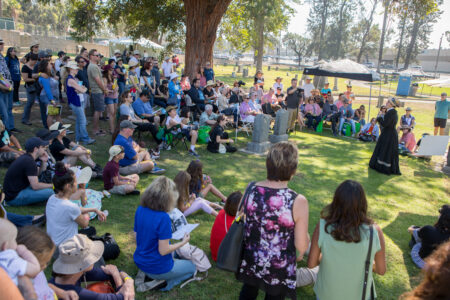 I Protest: Cora Morgan
Portrayed by Grace O’Neill in 2017. Suffragist Cora Morgan knew the dirty secrets of every politician in the city and she never let them forget it. Photo: Historical Society of Long Beach

There are two “firsts” for this year’s tour. Typically stories are told as narratives that may feature a single important event or reflections from across the characters’ lifetimes. This year one story is presented as an imaginary courtroom inquest into the deaths of three members of the Hartman family, with the suspected perpetrator in the hot seat. The second is a story about Isabel Hamner and her mother Rosie Moore, members of California’s Modoc Tribe. In creating the script, two HSLB historians created a narrative based on what they knew about the injustices imposed upon the California Modoc people. But Rosie Moore’s story did not fit the established narrative of the relocation of indigenous people. One historian spent hours tracing Rosie Moore’s life through census documents and other records and determined the event that made her experience different from others. It is explained in the presentation. 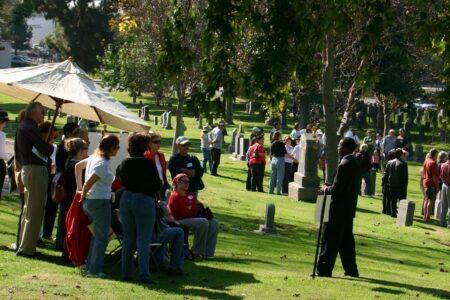 As always, the stories include the diversity that is Long Beach. Venson and Sarah Holman used their musical talent to bring Black music to the city’s White residents. Pilar and Sadie Linares’ story tells of a family whose roots in Long Beach go back to the ranchos and whose son Dick reached heights in the world of professional golf.

Bud Belden’s story tells of an unfortunate outcome to a culture clash between conservative Long Beach and musicians assumed to favor Bohemia lifestyles. To celebrate the 100th anniversary of the discovery of oil in Signal Hill we are featuring Clarence and Elizabeth Coseboom who were there when the discovery well hit and witnessed the changes that came with it. Peter and June MacNee were a couple who arrived in 1908 and set up shop in the center of town. Peter quickly learned there was nothing his wife couldn’t do. 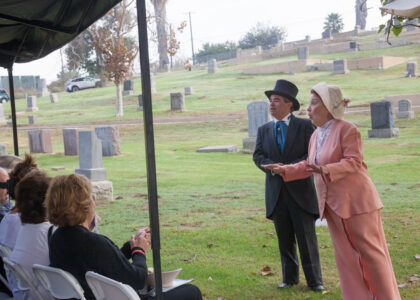 Along with eight graveside performances there are presentations about the cemeteries’ history, the traditions of Dia de los Muertos, songs from the HSLB archive performed by Jewel Box Children’s Theater, the little known story of spies in Long Beach during World War I, the life of Aiko Takeshita, the story of Councilman Daryl Supernaw’s grandparents, and Jane Harnett telling about her family’s contributions to the city.

Authors Dr. Craig Hendricks, Honorable Renee Simon, Claudine Burnett, Louise Ivers and Honorable Gerrie Schipske will be there signing their books which are available for purchase at the tour.

The grounds of both cemeteries are now beautifully green thanks to the city’s dedication to preserving the history that rests within their boundaries. It’s a festival of history and a day of fun for any age. We hope to see you there! For more information and to buy tickets visit www.hslb.org.