'It's dust and oil and dirt and it stinks:' How climate change fouls the air • Long Beach Post
- ADVERTISEMENT -
Help us light up the city; Add your home to the 2022 Holiday Lights map. CLICK HERE

Every day, Ron Baptiste’s home in West Long Beach is invaded by dust and ash. If he cleans it in the morning, his shelves and furniture are coated again by the afternoon.

He also deals with the constant odors of sulfur, gas, oil and other toxic substances that are spewed into the air from the multi-billion-dollar industry in his backyard.

Baptiste lives in West Long Beach—a neighborhood in close proximity to the Port of Long Beach, one half of the country’s biggest port complex. His two-story apartment is 100 feet from a railway, 1,000 feet from a trucking yard and  an eighth of a mile from a refinery.

“It’s not just dust, it’s dust and oil and dirt and it stinks, even with the windows closed,” said Baptiste, who has lived in the area for 28 years and occasionally experiences asthmatic reactions. 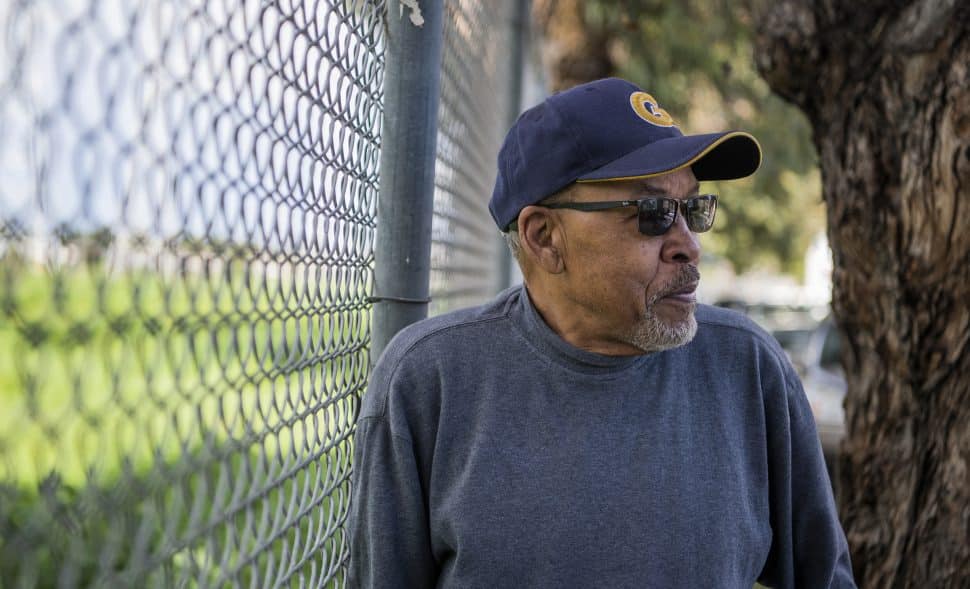 Ron Baptiste lives in West Long Beach where pollutants have been a big problem. Photo by Thomas R. Cordova.

Baptiste’s story isn’t new. There have been multiple studies over the years surrounding air pollution in the Los Angeles region, and how it especially affects areas like West Long Beach that are close to major roadways.

“Because of the amount of truck traffic, but also other diesel sources including ships and rail trains, we do know that diesel is one of the main air pollutants of concern in this community,” said Jo Jay Ghosh, a health officer with the South Coast Air Quality Management District.

Ghosh pointed to SCAQMD’s most recent air toxics exposure study from 2012 that showed diesel particulate matter as the main pollutant of concern. Diesel emissions can lead to lung cancer.

The study also showed that nearby refineries are the source of volatile organic compounds, some being carcinogens linked to blood cancers.

In neighboring Wilmington, there are three diesel- and gasoline-producing refineries, according to the state’s Energy Commission.

Research has shown that low-income communities, which primarily include people of color, are most susceptible to air pollution in the region.

A study on the inequitable exposure to air pollution from vehicles in the state released by the Union of Concerned Scientists this February found that black, Latino and Asian Californians are exposed to more PM2.5 pollution from cars, trucks and buses than their white counterparts. The differences were 43, 39 and 21 percent higher, respectively.

PM2.5 refers to particulate matter smaller than 2.5 micrometers in diameter. That’s 20 times smaller than fine human hair and small enough to penetrate deeply into the lungs, with the smallest particles capable of entering the bloodstream, according to the UCS.

The exposure to diesel emissions over the long-term can lead primarily to lung cancer. The rates of asthma are also higher for those living close to freeways and major roadways that experience heavy traffic, according to Ghosh.

“There’ve been a lot of studies, including studies in the West Long Beach area, looking at asthma, issues with asthma primarily among children,” Ghosh said. “So we do know that air pollution from cars and trucks and those types of air pollution sources are linked to a higher risk of asthma.”

Sylvia Betancourt knows these statistics all too well. She is a program manager for the Long Beach Alliance for Children with Asthma at Miller Children’s & Women’s hospital, a community coalition aimed to control children’s asthma and reduce hospitalizations and school absenteeism.

While dust, mold, pets, carpeting and household cleaning products can trigger asthma, so does a family’s surroundings, according to Betancourt.

“There’s something that’s much larger that happens when you’re in a community that’s completely surrounded by the largest and most active port complex, by a freeway that is a major corridor moving trucks in and out of the port through East Los Angeles and to the Inland Valley, and intermodal facilities,” said Betancourt.

Betancourt said some locomotives idle near homes and warehouses located in and around some West Long Beach neighborhoods act as magnets for those trucks that drive  right through the neighborhoods, in some cases 24 hours a day.

“When you’re in a home in West Long Beach, for example, and it’s a hot day, you have to open your windows,” Betancourt said. “And when you open your windows you’re exposing yourself, your family and your child with asthma to that diesel pollution.”

Because climate change is a compounding factor in the threat to the region’s air quality, it is something the city of Long Beach hopes to address as it develops its Climate Action and Adaptation Plan.

In a report released in November, the city identified air quality as a secondary climate stressor in Long Beach, citing the 710 and 405 freeways, refineries, the Port of Long Beach and other related industries as sources impacting air quality.

The now frequent wildfires in Southern California, coupled with strong Santa Ana winds that tend to send smoke and ash to the city, can further exacerbate poor air quality, according to the report.

The report assessed the city’s vulnerability to climate stressors such as sea level rise, flooding, drought, extreme heat and poor air quality. Once completed in the fall, the city hopes its climate plan can prepare the community for the impacts of climate change.

“Since climate models project higher temperatures in the future for Long Beach, a ‘climate penalty’ exists for ground level ozone, which means that greater state and regional emissions controls will be needed to meet a given air quality standard,” the report stated.

The report is intended to prepare for and adapt to what’s to come, and help create policies, programs, practices and incentives for residents and businesses to reduce their greenhouse gas emissions.

Over the years, multiple pieces of legislation have passed through the state Legislature in an attempt to combat air pollution.

As recently as early February Sen. Connie Leyva, D-Chino, introduced legislation that would establish “smog check” requirements for heavy-duty diesel trucks in the state, which aren’t required to have the same type of smog checks as passenger cars.

Known as SB 210, Leyva’s office said it will help remove about 1,600 tons of harmful particulate matter, equivalent to removing 375,000 trucks off the roads in the state, over the next decade. The bill is scheduled to be considered by Senate committees later this spring.

Under AB 1132, air quality management districts are allowed to issue temporary orders and cease operations at facilities in violation of either federal or state air quality requirements.

Since then, SCAQMD has flexed its newfound power. In October it ordered a temporary halt of operations at Anaplex in Paramount, just north of Long Beach, for emitting high levels of the carcinogenic toxic compound hexavalent chromium.

Along with the Westside, North Long Beach is also known to have poor air quality and high levels of hospitalizations for asthma, according to the city’s November report.

AB 617 establishes a statewide program to address air pollution at the neighborhood level in communities that are considered to have the dirtiest air.

The bill focuses on creating an air-monitoring and targeted action plan that requires mobile and stationary sources to reduce pollution. It includes strong enforcement and timetables, according to Garcia’s office.

Polluters will also face higher penalties, an increase the Legislature has not been able to implement in over 35 years.

The Tesoro Refinery in Wilmington.

Ghosh is on a steering committee that focuses on the neighborhoods of West Long Beach, Wilmington and Carson. The other two committees focus on San Bernardino/Muscoy and Boyle Heights/East LA/West Commerce. All three neighborhood groups are part of “Year 1 implementation” of AB 617.

With only a handful of steering committee meetings having already taken place, Ghosh said the goal is to first identify areas of concern, create a list of priorities and eventually strategize how to reduce emissions and create an air monitoring plan.

“AB 617 is a really important program and one that we’re really excited about and can really make a difference in these disadvantaged communities,” said Ghosh, who emphasized the need for public participation at the meetings. “But it’s not the only program that we do. It doesn’t mean that we’re stopping work on everything else.”

In one of its latest efforts to combat air pollution, SCAQMD announced late January that commercial gardeners and landscapers, local governments, school districts, colleges and nonprofits may be able to receive up to 60 percent off new zero-emission, battery-electric commercial-grade lawn and garden equipment as part of an incentive to replace polluting gasoline- or diesel-powered equipment.

The program is backed by $2.5 million in incentive funds from the U.S. Environmental Protection Agency and SCAQMD.

Studies by the state Air Resources Board show that by 2020, smog-forming volatile organic compound emissions from lawn equipment are expected to exceed those from cars and 42 percent of engines fail CARB’s evaporative emission test.

The Port of Long Beach is also working toward cleaner technology as part of its Clean Air Action Plan that was last updated in November 2017.

Late last year it reported a decline in particulate matter, nitrogen oxides and sulfur oxides due in part to cleaner cargo handling equipment.

The Coalition for Clean Air works with the community to place air quality monitors in homes, schools and businesses and link them to an online network as part of its CLEAR (Community Learning Enhances Air Resources) program. The monitors are currently located in South East L.A., the South Bay and Long Beach.

The coalition hopes to include more participants to track particulate matter in the community.

It has also provided air quality monitors and a science curriculum, aligning with common core standards, to school districts throughout the region. Hughes and Rogers middle schools were the first schools in Long Beach to take part in the educational program during the 2018-19 school year.

At a recent student presentation on air quality at Hughes, Joe Lyou, the coalition’s CEO and a board member for SCAQMD, said the real challenge is heavy-duty trucks and locomotives.

While new technology is available it’s also expensive, so the question is, who pays for it?

Lyou said there’s no perfect solution but one idea is to add a few cents on the shipment taxes, to get consumers from other parts of the country, who are buying goods that come in from the twin ports, to have “skin in the game”.

“It’s going to cost billions of dollars but save millions of new dollars in health care,” Lyou said.