As the population returns to normal life—or at least post-pandemic life—and returns to on-site work, travel plans, and outings to theaters and restaurants, many pets are enduring loneliness and anxiety—not all, but enough so that social media users are pleading for advice about their dogs’ behavior issues and ads for pet sitters populate inboxes.

“My daughter tells me when I leave, my dog sits at the front door, facing the door, and whines. I can’t even go to my room without the crying. And I’m not even that interesting,” a Nextdoor member posted.

In their March survey of dog and cat housemates, pet-sitter network Rover.com reported that 93% of respondents indicated that the “pandemic pet” they adopted improved their mental or physical well-being and over 80% said that it made working at home even more fun. Robes, slippers, coffee, laptop and fur friend—what more could you want?

However, 40% of the participants expressed their own anxiety about going back to work and leaving their pets at home.

“Poppy is good by herself,” Emmanuella Pena said. “Usually, it’s me who worries too much and I feel bad and guilty, but she has the cat at home, too. She is happy when I get home, though.”

Separation anxiety is rough on pets, dogs in particular. Bethany W. Adams of the Humane Society of the United States described the condition as “a disorder that can develop when a pet is away from the human or other animal to whom she’s most bonded, resulting in a spectrum of behaviors that can include trembling, salivating, excessive vocalization, overgrooming, losing control of bladder, or even minor to major destruction of your home.”

Anyone who’s heard their dog whining blocks away or found the stuffing from the sofa pillows strewn throughout the house is nodding their heads. Cats don’t seem to manifest the condition as often as dogs do because they’re too vain to tell you. They might let you know by gluing themselves to your ankles when you get home, probably in a vengeful attempt to trip you; unrolling the toilet paper, crying in the window; or ignoring you for hours when you get home

Not every pet exhibits signs of the condition.

“Many pets thoroughly enjoyed having their owners at home throughout the pandemic, but certainly not all of them,” said author and animal communicator Terri Steuben. “Last March, I started getting lots of calls from clients about their growling dogs and hissing cats. Dogs became worn out and grouchy after getting walked many times a day by all members of the household. Cats hated the noise of the phone and computer and just wanted the people to leave so they could have some peace and quiet.” 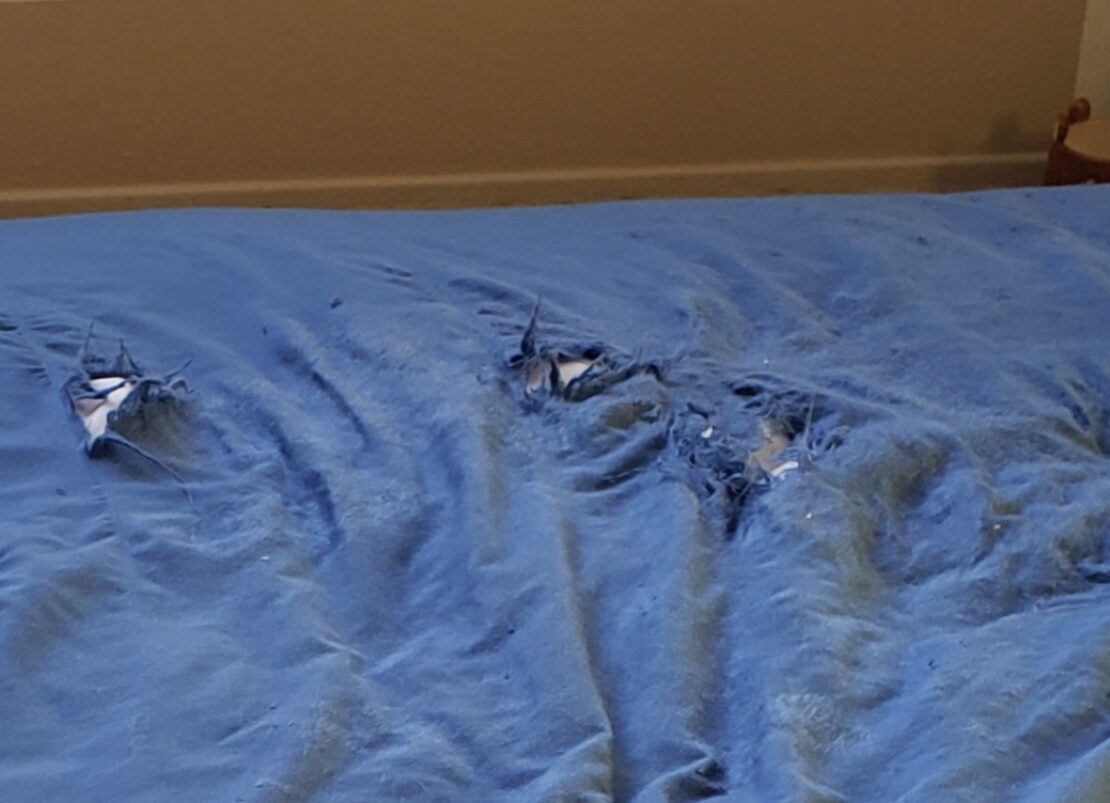 A shred of anxiety evidence: My neighbor’s dog, irritated at her coming home from work late, took out her annoyance on the bedsheets, markedly lowering the thread count. Courtesy photo.

Separation anxiety did not begin when pandemic restrictions ended. It’s been around for a while

This type of stress in animals is nothing new for people who’ve lived with pets, dogs in particular, for any length of time. Another study, conducted by the American Humane Association (AHA), cited behavioral issues as being among the top reasons that people relinquish their pets to shelters, and this was in 2016. This throws doubt upon the often strident reports of waves of shelter returns of pandemic pets, but that’s fodder for another trough.

However, people who’ve adopted their first cat or dog may not be ready for the effects of separation anxiety on their new friends. This is especially true if the humans have stayed home from work during the long pandemic months. The upcoming fireworks season, not that it ever abated since May 2020, adds another level of torment for animals and their people.

Myriad ideas for helping your pet through separation anxiety can be found on the internet or on social media, many of them helpful. But some people seem overwhelmed by the variety of suggestions and the patience it takes to make them effective.

“Nothing I’m doing is working!” virtually cried one frustrated Facebook poster. “This is so stressful. Right now, I’m leaving for 2 minutes and then I’m headed back in. My vet says she just needs to learn I’m coming back, but she’s not learning.”

Indeed, there is no silver bullet to cure an animal of anxiety. Instead, selected suggestions used simultaneously and coupled with a lot of patience can ease it.

No step-by-step procedure. Instead, a treat bag of tricks 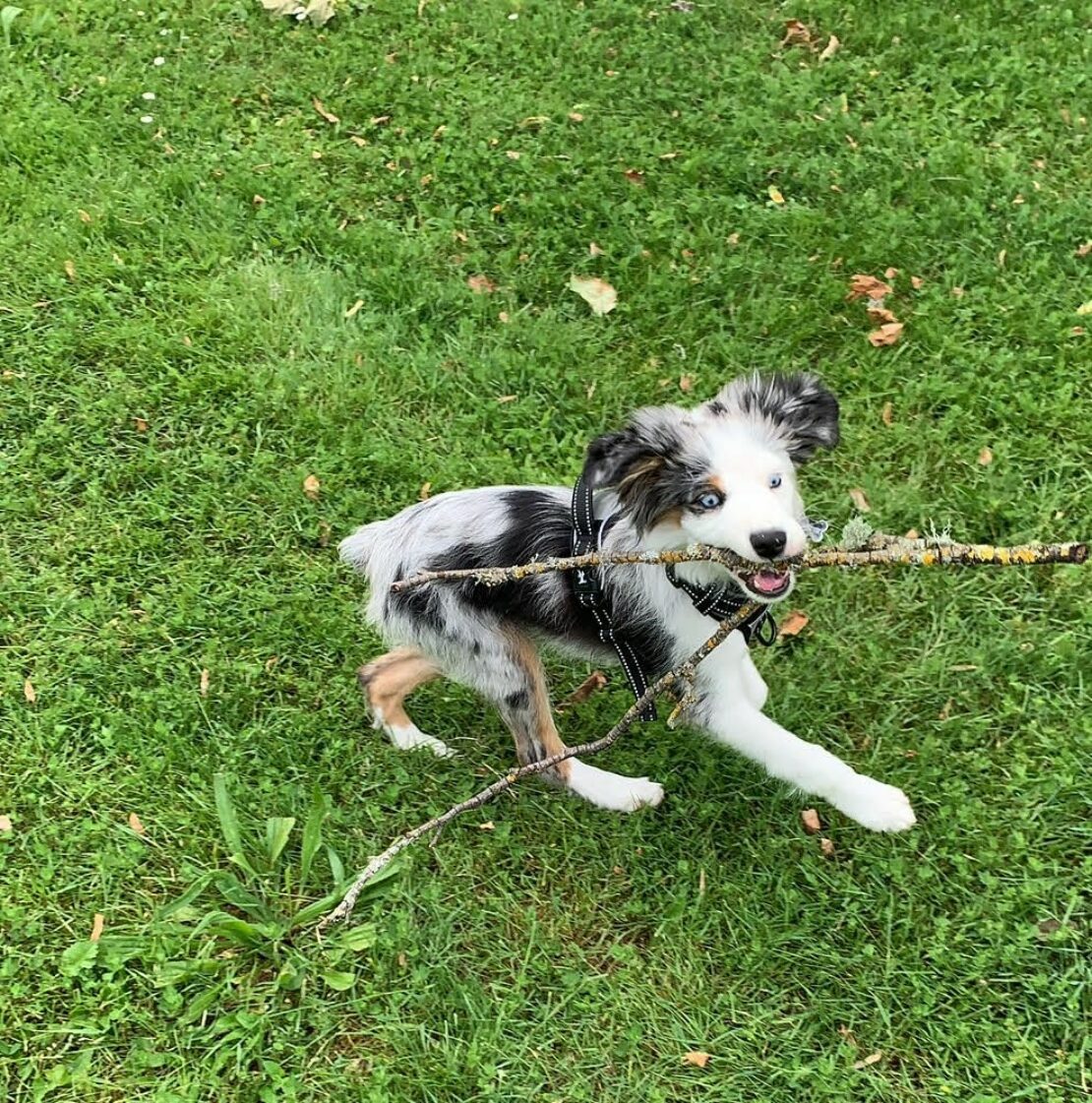 Jesika Lorraine has two dogs: a sedate Chihuahua named Pierre and a mini-Aussie, Atlas, who’s having a fine time tiring himself out here. Despite Pierre’s calm demeanor, Atlas still suffered anxiety, so Lorraine sought the services of trainers and was also given different tools and methods to work with. “ One method: About a half hour before you leave home, grab your keys and keep them with you,” she said. “Then, a few minutes later, put your shoes on. But don’t leave just yet. Then, about 10 minutes before you leave, go outside. If your dog starts crying or barking, give them a few seconds and come back in. But do not acknowledge them. Go outside again for a few seconds and back inside. Then, stretch the time out for minutes to hours.” Lorraine also uses crate training and food puzzles. “You have to find out what works for you and your fur baby,” she said. “Comfort and time are key.” Photo courtesy of Jesika Lorraine.

As with anything worthwhile, helping your pet—and you—through separation anxiety is no walk in the dog park. Where do you begin, then?

“First, we have to diagnose it properly,” Goldman said. “The more we learn, the more we know we can’t make a blanket statement [from the effects of separation anxiety on pets]. Some dogs are fine in the house by themselves, some dogs can be only with a particular person. It’s more complex than we initially thought. But it’s much easier to prevent it than to fix it.”

Goldman suggests starting practice early when you know that you’ll be returning to work in person, even if the date is yet unknown, or several weeks before a planned trip without your pet.

“Unfortunately, the first time people practice, it’s for half a day,” Goldman said. “They’ve been home because of the pandemic, and suddenly, they have to work. So, any time you’re making a change, you want to introduce [your absence] in very small doses so the animal doesn’t experience trauma. Once trauma is introduced, the impact is very strong.”

The following ideas don’t comprise a step-by-step guide to help your pet through separation anxiety, but they are steps in the right direction to help both of you get through it. Try out as many as you can, simultaneously when possible. 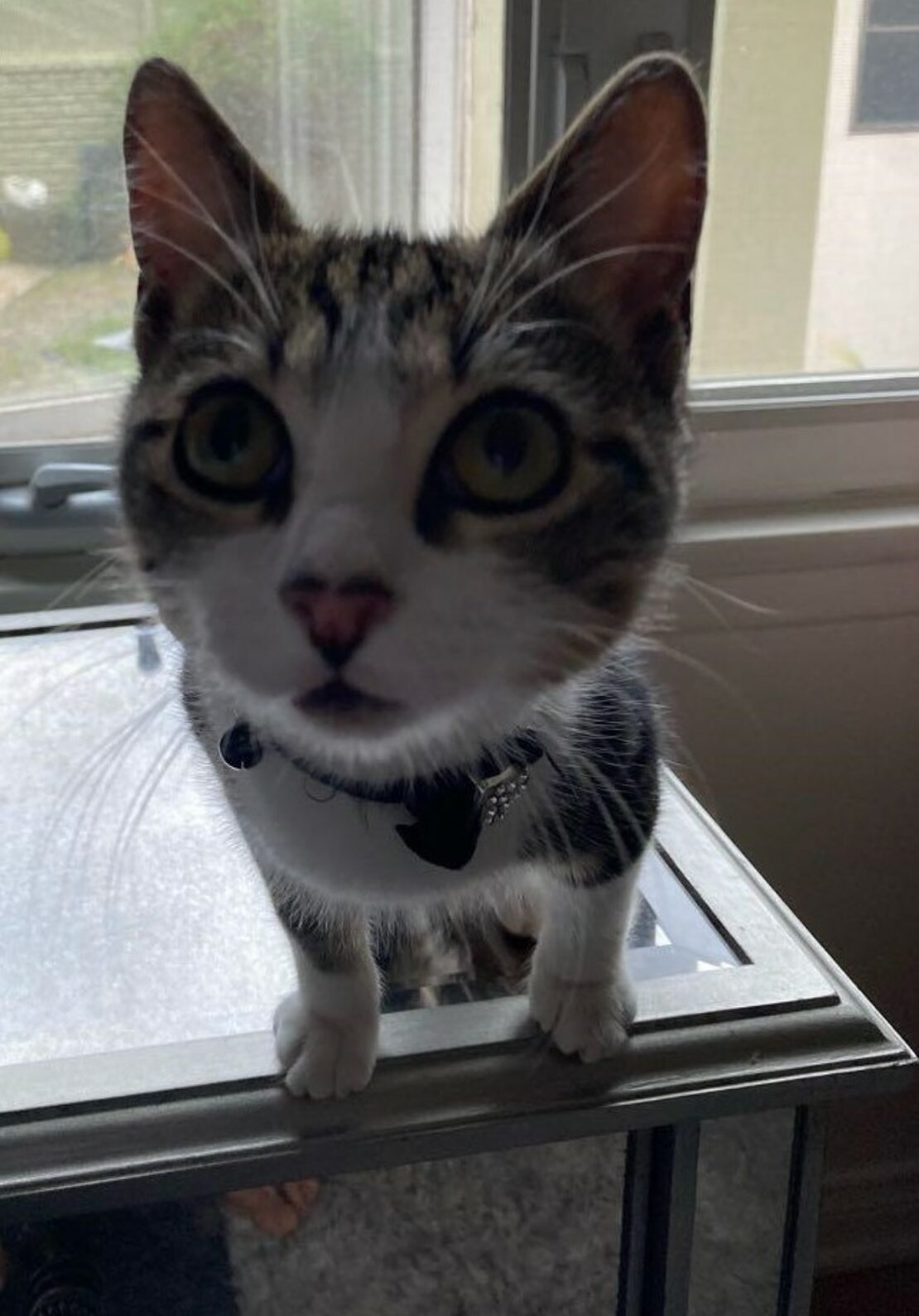 This is Joy, who was foisted on Long Beach resident Lia Landas about a month after Landas’ dog, Sophie, had passed away. “Sophie required medical attention, so I chose to stay home, and COVID was a blessing, giving me more time together and the ability to take care of her,” Landas said. The loss devastated her. Less than a month later, Landas’ friend came over, purportedly for a visit, and handed her a kitten, saying that he needed a foster. Landas, of course, kept the kitten, and joy has literally returned to her life. She is now trying to organize kitty playdates for Joy and for other cat parents to take an edge off loneliness. If your cat seems lonely and is willing, why not—but organize an initial meeting between potential playmates. Goes for dogs and kids as well. Photo courtesy of Lia Landas

As an absolutely last resort, if your pet’s anxiety is over the top, visit your vet and have them prescribe an anti-anxiety medication. Don’t go to the internet or social media to find out what “experts” or friends recommend—this is your pet’s health, and a professional is required. This goes for CBD oil as well.

“No one really knows about doses of CBD oil,” Goldman said. “The solution you chose might be deleterious.”

But there are good resources online for education. Goldman recommends the pet behavior articles in the ASPCA website. The articles address numerous issues and behaviors that your pet might manifest.

Talk to the animals? Admit that you do it!

One final thing you can do: be your pets’ Dr. Doolittle and talk to them. Steuben advises to be simple, as if you were talking to a grade-school child. Dimes to dog biscuits, you engage in various levels of conversational silliness every time your pet pads into the room.

“Tell them as soon as you can that things are going to change and when,” Steuben advised. “Then, remind them as the day approaches. You can say something like, ‘Next week, I am going back to work. When that happens, I will be gone all day and you will be by yourself. Remember when I used to do that?’”

Steuben said that any time you’re ready to leave, tell them three things to reduce their anxiety: where you’re going, what they can do while you’re gone—take a nap, play with their toys, shed on the carpet—and finally and most importantly, what you’ll do together when you get home—go for a walk, cuddle on the couch, play with toys in front of the TV.

“This last point is key to them understanding and picturing that you are really coming back,” Steuben said.

And you know? All that just might reduce separation anxiety, if not in the dog or cat, most assuredly in you.