A 95-year-old woman is asking a judge to find she is not obligated to make a $25 million donation to music education at Cal State Long Beach, alleging she was coerced into signing such an agreement by a former 49er Foundation executive and others associated with the university.

In a statement, Cal State Long Beach responded Friday to the lawsuit, saying Cole’s attorneys have filed an “ill-considered and unsupportable complaint” in her name.

“We have appreciated the donor’s longstanding support of our students, including her 2020 transformational commitment to the university,” the statement read. “We are deeply disappointed and saddened that attorneys have filed this ill-considered and unsupportable complaint in the donor’s name. We vigorously dispute the assertions and characterizations made in this complaint and look forward to setting the record straight.” 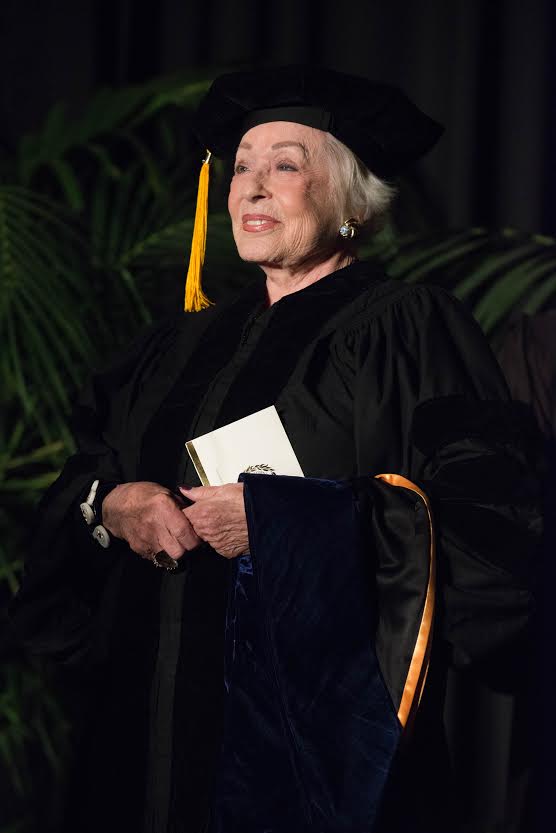 Regena Cole shown when she was receiving an honorary doctorate in fine arts from CSULB in 2015. Courtesy photo.

The suit alleges that those involved in allegedly deceiving Cole “used their relationship with her, her weakened physical and mental health and her dependence and trust in others, to intimidate and control Cole so that they could exert control and dominion over her and her property to gain an alleged irrevocable cash contribution of $25 million to CSULB.”

The purported donation would benefit music education at the university, the suit states.

According to her suit, the agreement requires her to make the donation or have the sum considered a debt to her estate after she dies.

“Further, the alleged gift agreement was drafted and put forward solely by defendants for their direct benefit by isolating Cole from her family and friends, including long-time trusted financial advisors and attorneys… ” the suit states.

Over the past decade, Cole has gradually suffered from memory lapses and moments of confusion, especially after late morning, which cause her to be susceptible and vulnerable to manipulation and isolation, the suit states.

The CSULB 49er Foundation is a nonprofit group that manages endowment funds, donations and estate planning gifts to CSULB. In 2020, Michele Cesca, who at the time served as an agent of the 49er Foundation and as vice president of university relations and development for CSULB, used her perceived friendship to gain access and control over Cole, the suit states.

Over time, Cesca and others allegedly coerced Cole into signing the gift agreement.

Cesca did not show the alleged donation to Cole’s attorneys until months after the signing, the suit states.

Because the signatures of three university representatives appear after the date of Cole’s alleged penning of her name on Aug. 19, 2020—including that of CSULB President Jane Close Conoley—there is no indication that any of the alleged signings by representatives from CSULB and the 49er Foundation were executed on the same day, the suit states.

There also is no indication that the donation was properly witnessed, notarized and disclosed in full to Cole, according to her suit.

In November 2020, Cesca contacted Cole’s attorneys in an email that “completely misrepresented key facts in this matter,” the suit states. In addition, a confidential attorney-client communication produced by university attorneys purporting to document the donation was in fact only a draft outline of a preliminary discussion between the plaintiff and her lawyer regarding a matching gift agreement and does not state she agreed to an irrevocable cash contribution, the suit states.

Not until last month were Cole’s attorneys able to “uncover the paper trail of fraud committed by defendants and their actions to improperly cause the acts of elder abuse, fraud, negligent misrepresentation and unjust enrichment against Cole through deception, manipulation, undue coercion, fraud and concealment,”  the suit states.