A several-yards-long stretch of dried weeds and dirt exploded in color in the hours and days following 16-year-old Aiden Gossage’s death Saturday night.

The Millikan senior was just a couple of feet shy of crossing Los Coyotes Diagonal at Deborah Street a little after 9 p.m. Saturday when he was struck by a Chevrolet Tracker SUV that was driven by 33-year-old Kevin Chris Dahl, who’s been arrested on suspicion of driving under the influence and gross vehicular manslaughter, according to police.

A couple of dozen people, including classmates, neighbors and family have been attending the site since Saturday night, lighting candles, placing bouquets of flowers, signing tributes and exchanging hugs and tears. 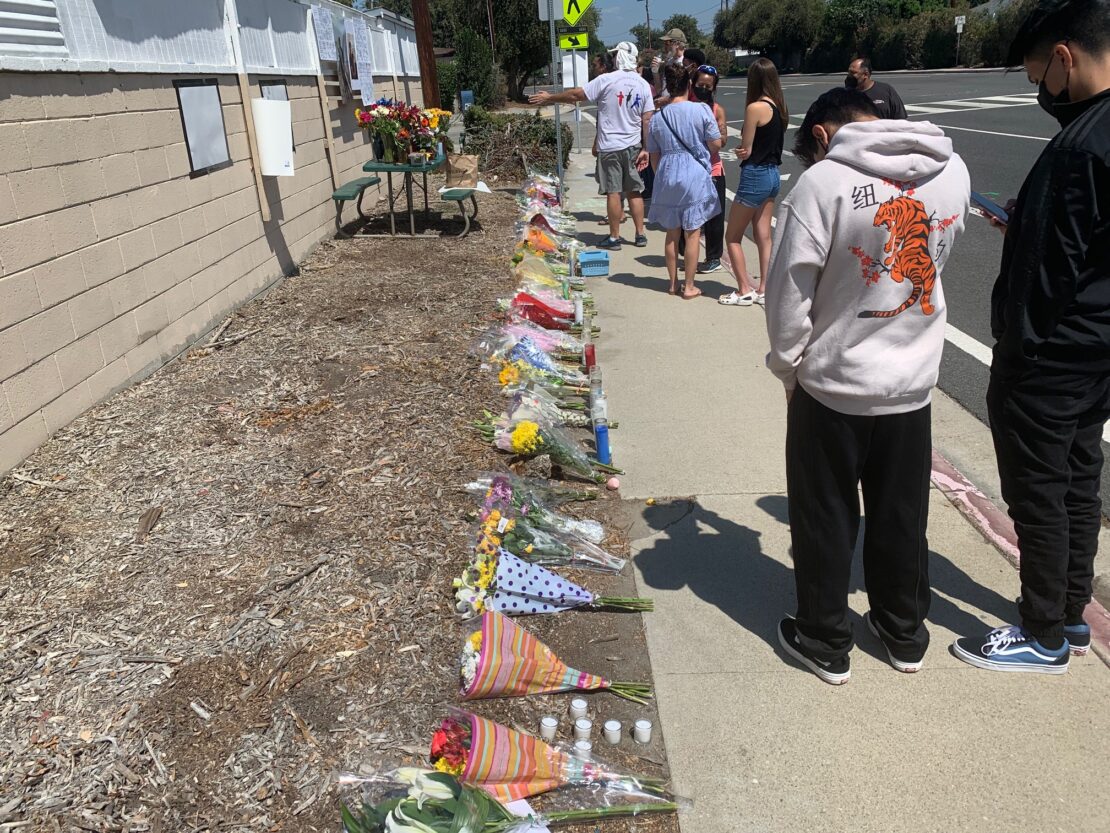 Classmates, family and friends stop by to pay tribute to 16-year-old Millikan student Aiden Gossage, who was killed Saturday night by a motorist, on Monday, Sept. 6, 2021. Photo by Tim Grobaty.

Among those at the site along Los Coyotes were the boy’s parents, Lily and Greg Gossage.

Greg Gossage, who works as a forensic toxicologist in the Long Beach Police Department’s lab, spoke proudly about his eldest son’s tireless work as a bodybuilder, lifting weights for hours at a time at a nearby Fitness 19 gym.

“He was hardly ever home,” said Gossage. “He was always working out or over at one of his friends’ house. I never worried too much about him; I wanted to give him as much freedom as I could. But I did have some trepidation about him walking at night. I sat him down and I told him to be careful. I told him you’re more likely to get killed in an accident than in any other way at your age.”

Maybe he didn’t over-worry, but Gossage was concerned enough that he tracked Aiden and his other son, Luke, a freshman at Millikan, on their phones through GPS when they were out at night. Hauntingly, Gossage said at a little after 9 p.m., his GPS showed Aiden’s phone had stopped moving at a spot several yards south of Deborah Street. Curious at first, Gossage eventually dismissed it as a GPS error, he said. By 10 p.m., Greg and Lily were in bed and soon asleep until they were awakened at about 1 a.m. when their doorbell rang. Again, Greg said he wasn’t concerned. Aiden was always forgetting to take his keys when he went out.

Lily used her phone to see who was at the door using her Ring app. Greg recalls thinking, “Oh, God, I hope Aiden’s been arrested,” the lesser of two alarming reasons police would be at the door in the middle of the night. Then, he saw the police chaplain was among those on his front porch and he knew it was immeasurably worse than an arrest.

Lily, who is Buddhist, said she plans to string up some lights along the several yards’ length between where her son was struck and where he finally came to rest. “I believe that light connects the living and the dead,” she said. “I have been talking to (Aiden) since Saturday. I’ve told him, ‘I’ll see you in another life.'”

The couple hopes to have a traffic light installed at the crosswalk where Aiden was struck. There are signs there, and a button that sets off a flashing signal, “But they don’t stop; they don’t even see them,” said Lily as cars sped by on the busy diagonal behind her, rounding a curve in the street near a crossing sign obscured by an overhanging tree branch. “He was almost across when the car hit him,” she said. “He didn’t have a chance to react.”

“It’s important to tell kids to be careful,” she said. “Tell them you love them every day.”