Californians reduced their water use at home by a meager 1.8% statewide in July compared to last year, even after Gov. Gavin Newsom urged residents to conserve 15% and drought continues to spread across the state.

Officials this week warned water providers south of the Delta who rely on state water allocations — already slashed to 5% this year — to brace for the possibility of zero supply next year.

The Department of Water Resources also cautioned that next year’s cuts in supply could expand to growers and others known as settlement contractors, whose claims to the water predate California’s massive systems of reservoirs, aqueducts and canals.

“Californians always have hope, and that’s healthy. But we need to be prudent,” Karla Nemeth, director of the state Department of Water Resources, said in an interview. “We’re doing more conservative planning than we’ve ever done.”

Drought conditions deemed extreme or worse now cover nearly 90% of the state. Hundreds of domestic wells are running dry, and levels in major reservoirs have dropped drastically below historic averages — which bodes ill for supplies next year.

“The challenge is there is no water,” Nemeth said.

“We’re planning for the worst, but we are hoping for something better,” Nemeth added at today’s meeting of the State Water Resources Control Board.

Who’s conserving and who’s not?

In early July, Newsom urged Californians to voluntarily cut domestic water use by 15%, but in the absence of a statewide mandate, a patchwork of restrictions has emerged. The result: Californians used about 191.5 billion gallons of water in their homes, businesses and other industrial or institutional spaces in July, only 1.8% less than a year earlier.

“I’m not here to say 1.8 is a good number,” said Joaquin Esquivel, chair of the State Water Resources Control Board, at a Monday press briefing. “We’re going to have to continue to dig in deeper and look forward to seeing what the numbers show then in August.”

When asked when to expect statewide conservation orders, Esquivel said that for now, the board is reflecting on the data. “We need to continue to see that response and decision-making, and the state’s here to make sure that if we need to go mandatory, that’s where we’re going.”

The biggest drops in household water use were along the hard-hit North Coast, with a nearly 17% reduction in July 2021 compared with July 2020. The Sonoma County city of Healdsburg led the state by cutting its water use by more than half, and Cloverdale, which reduced its use by 37%. Both cities enacted mandatory water use restrictions.

Water use in the South Coast region, which includes Los Angeles, Orange, San Diego and Ventura counties, was roughly even with last summer, down 0.1%. However, about 40% of water suppliers in the area actually used more water.

“There’s always more we can do. But…Southern California has done a lot” to conserve in recent years, said Demetri Polyzos, the Metropolitan Water District’s team manager of resource planning.

The biggest increases in water use came in El Segundo, up 31%; the Mission Viejo-Laguna Niguel area, up 15%; and the cities of Downey and Poway and Ventura County’s Casitas district, up 14%. The Los Angeles Department of Water and Power and the city of San Diego used about 1% more.

San Francisco Bay Area residents cut their water use by 8.4%. Northern and southern San Joaquin Valley residents reduced use by 0.8% and 1.6%, respectively. 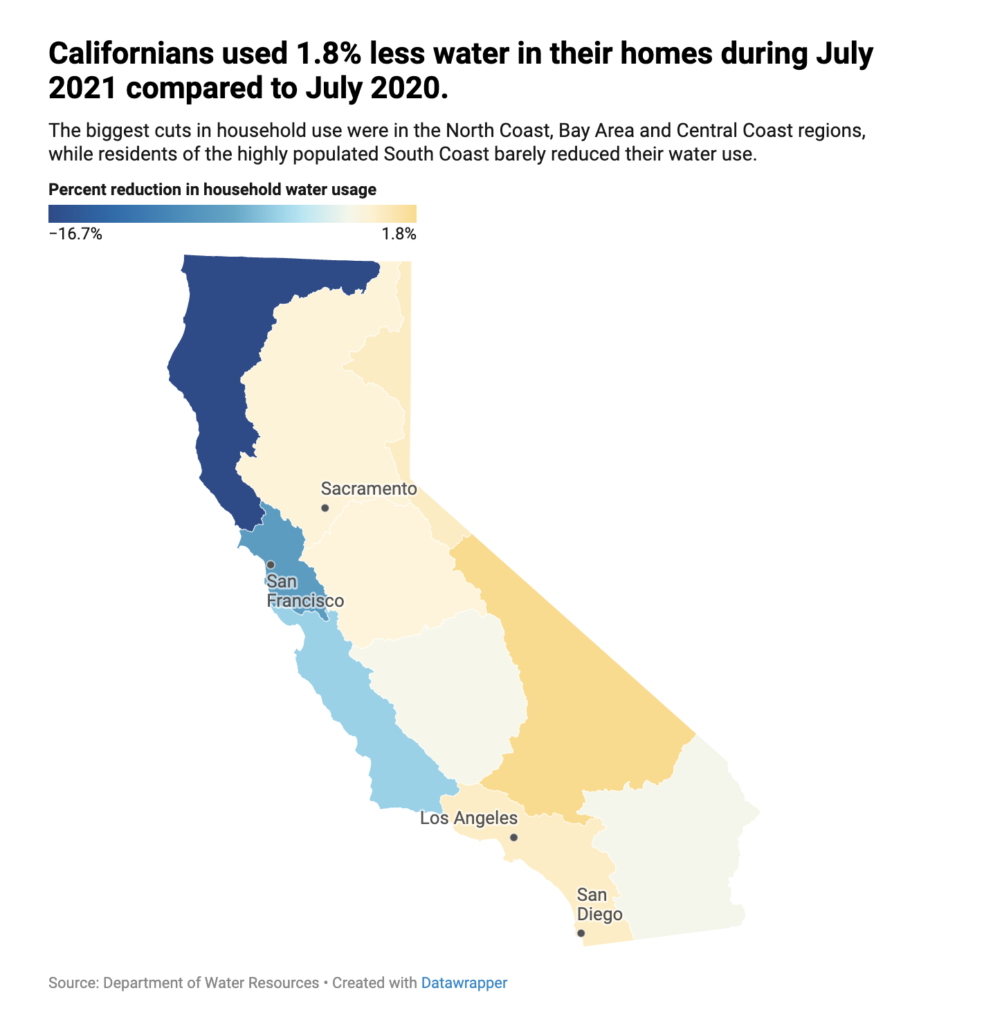 The statewide calculation doesn’t include two suppliers — the city of Exeter in Tulare County and the Desert Water Agency in the Coachella Valley — that had unexpectedly high water use. “Their percent increase was higher than reasonable and my attempts to confirm both 2020 and 2021 numbers received no reply,” said water board data specialist Marielle Pinheiro.

A squeeze south of the Delta

Officials warned that major cuts could come for irrigation districts, cities and other water users south of the Delta relying on supplies from the State Water Project, which provides water to 27 million Californians and 750,000 acres of farmland.

At this point, Nemeth said there’s “a slim likelihood” of supplies for these water systems, which includes the giant Metropolitan Water District, which provides imported water to 19 million people in Southern California. Worst-case scenario, she said, “we’ve asked them to plan for no allocation from the State Water Project.”

Those suppliers, including in the Bay Area, Southern California, the Central Coast and the San Joaquin Valley, have seen steep cuts before, during the last drought in 2014. But this time is worse: Even a wet year is unlikely to bring relief.

“We’re starting with record low (reservoir) storage,” Nemeth said. “We would have to have north of 140% of (average) precipitation to generate average runoff into the reservoirs that would begin filling that hole.”

Jennifer Pierre, general manager of the State Water Contractors, an association of public water agencies, said “a 0% allocation next year would be extremely challenging.”

Polyzos of the Metropolitan Water District said “a combination of the things that we’re doing,” such as storing water, “in conjunction with the public conserving will definitely get us through low State Water Project allocation.”

Even landowners, irrigation districts and others with rights to water that predate state and federal water projects could see their water supplies squeezed next year, Nemeth said. These water users agreed in contracts decades ago to limit their water rights to allow construction of the massive projects, which transferred water south. Their allocations aren’t cut to the same extent as more junior contractors, such as the Metropolitan Water District.

“With hydrology this bad, everything’s on the table that we could cut them even deeper — even deeper than their contracts allow for,” Nemeth said. “I don’t think we get out of next year without a lawsuit.”

Already this summer, Central Valley irrigation districts and the city of San Francisco have sued the state over moves to stop them from diverting water from rivers and streams.

State and federal project operators have come under fire from environmental advocates for supplying hundreds of thousands of acre feet to these senior contractors, while failing to meet water quality standards and cutting allocations to more-junior agricultural contractors and cities.

Feather River Contractors, for instance, were allocated the lowest levels allowed in their contracts, but still were expected to receive nearly 600,000 acre feet of water, according to the Department of Water Resources — enough water to supply 1.8 million Southern California households for a year. That’s about three times more water than long-term State Water Project contractors, including the giant Metropolitan Water District, were provided.

California’s drought conditions and warming temperatures are threatening salmon and other rare fish.

For endangered Sacramento River winter-run Chinook salmon, “we’ve modeled the temperature dependent mortality at about 80% this year, meaning only 20% even survive to make it out of the gravel,” Barry Thom, West Coast regional administrator for NOAA Fisheries, told the water board.

Doug Obegi, a senior attorney with the Natural Resources Defense Council, urged the board on Tuesday to require state and federal water project operators to cut supplies to settlement contractors to protect fish.

If supplies aren’t reduced, “you’re going to have even worse temperature mortality of salmon next year,” Obegi told CalMatters. “You start with less water, and you have less at the end of the year, you’re going to have a lot more dead fish. It’s grim.”

Last year, early planting by growers “really limited the amount of decisions we thought we could make without causing real economic damage,” Nemeth said. This year, “We want to alert them sooner that it could be worse than they’ve experienced before.”