A young man was able to rescue one person from a deadly fire in Bixby Knolls late Wednesday night, but the raging flames stopped him from saving another man from the blaze, according to a Long Beach Fire Department official.

The young man worked as a caregiver for two older men at the home on Marcellus Street near California Avenue, LBFD Capt. Jack Crabtree said.

Around 11:30 Wednesday night, the caregiver called 911 after a smoke alarm woke him up, according to Crabtree.

Crabtree said the younger man, who is in his 20s, was able to get one of his charges out of the house before fire crews arrived. He then yelled for help and alerted a neighbor, Wayne Shimabukuro, who is a retired firefighter with the Los Angeles County Fire Department.

“We got about 5 feet in this door and the smoke was banking so hard that I had to get out,” Shimabukuro said. 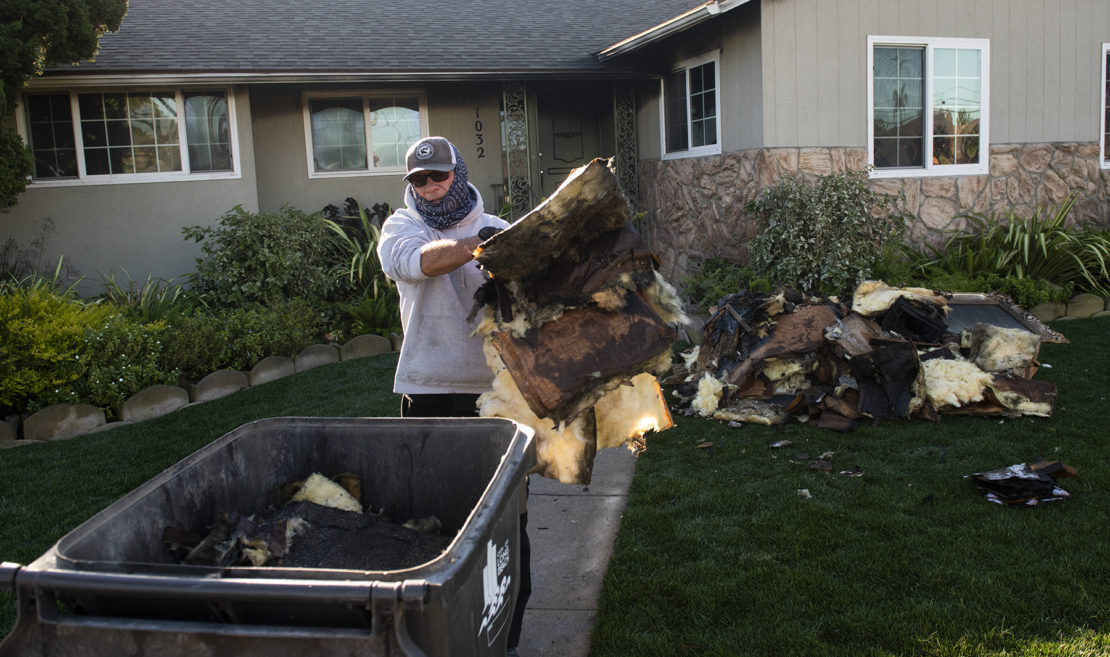 Wayne Shimabukuro cleans up debris at his neighbor’s house after a fire where an elderly man died in Long Beach Thursday, January 14, 2021. Photo by Thomas R. Cordova.

He tried getting in through the back doors, but they were locked, so he picked up a hose to prevent the fire from spreading to a neighboring home, which is a care facility. He also made sure the rescued man was breathing and OK, he said.

Firefighters later found the body of a man in his 80s inside the home, according to Crabtree.

The caretaker and the man he rescued, however, were not seriously injured.

“He was really a hero,” Crabtree said, commending the younger man for his quick action that likely saved a life.

Shimabukuro said the caretaker was remorseful that he couldn’t save both of the men.

“He should be considered a hero,” Shimabukuro said. “He tried and tried to save those guys.”

Once firefighters arrived, they were able to quickly douse the flames that reached high above the house.

The cause of the blaze is still under investigation, Crabtree said.

On Thursday morning, Shimabukuro and his neighbor Johnny Hnguyen were working to clean up the pile of burnt insulation and rubble left on the lawn. Next to it, a gold ornate mirror caked with soot and grime leaned against the planter. Other neighbors came by, offering trash cans or garden tools.

Shimabukuro was careful to keep anything that might’ve been important to the men who lived in the home, separating a pile of documents from the trash.

Another neighbor left a small bunch of lilies on the front porch earlier in the morning.

“This touches everybody’s heart in this neighborhood,” Shimabukuro said.

They didn’t know each other well, but Shimabukuro had just seen the two elderly men at Christmastime when he and his wife dropped off matzo ball soup and gift cards. They were quiet and stayed inside most of the time, he said.

Hnguyen said he would sometimes help them back into their home when they fell. He knows they’ve lived in the home a long time, at least 13 years, and that they were doctors.

“I wish I would’ve known if they were like in the military or where they were from,” Shimabukuro said. “This is a lesson to all of us: Hey, connect to your neighbors.”

Editor’s note: This story has been updated with more details from the scene and interviews with neighbors.