From a three-headed sea monster with bags of rice illustrating sand at the bottom of the ocean, to the Incredible Hulk bursting through a brick wall, CANstruction Long Beach bridges creativity with advocacy for food insecurity, while supporting the nonprofit organization, Food Finders.

The 8th annual event, returning to Long Beach from Sept. 15 to Sept. 25, provides participating local architecture and engineering firms with 12 hours to construct a design made solely of canned goods, and according to a theme.

Past themes have included “Breakfast CAN Make a Difference,” and “Rock CAN Roll,” the Dr. Seuss-themed “One Can, Two Can, Who Can, You Can,” to the mythical creatures themed “Don’t Let Hunger Drag On.”

“It’s just so much fun to watch the different layers get taller and taller,” said event organizer Terri Henry. “I enjoy watching the build every year, it just amazes me.”

Transforming 3,000 to 4,000 cans into artistic structures within 12 hours is no easy task, said Henry, who estimated that around 150,000 pounds of food have been donated to Food Finders over the past eight years of Long Beach’s CANstruction event. Last year’s event provided over 13,000 pounds of food to the nonprofit.

Food Finders distributes donated fresh and non-perishable food within the same day to different agencies that serve the food insecure, from shelters to organizations such as the Boys and Girls Clubs.

For every 10,000 pounds of food donated, about 8,300 meals are provided, according to Food Finders, Henry said. 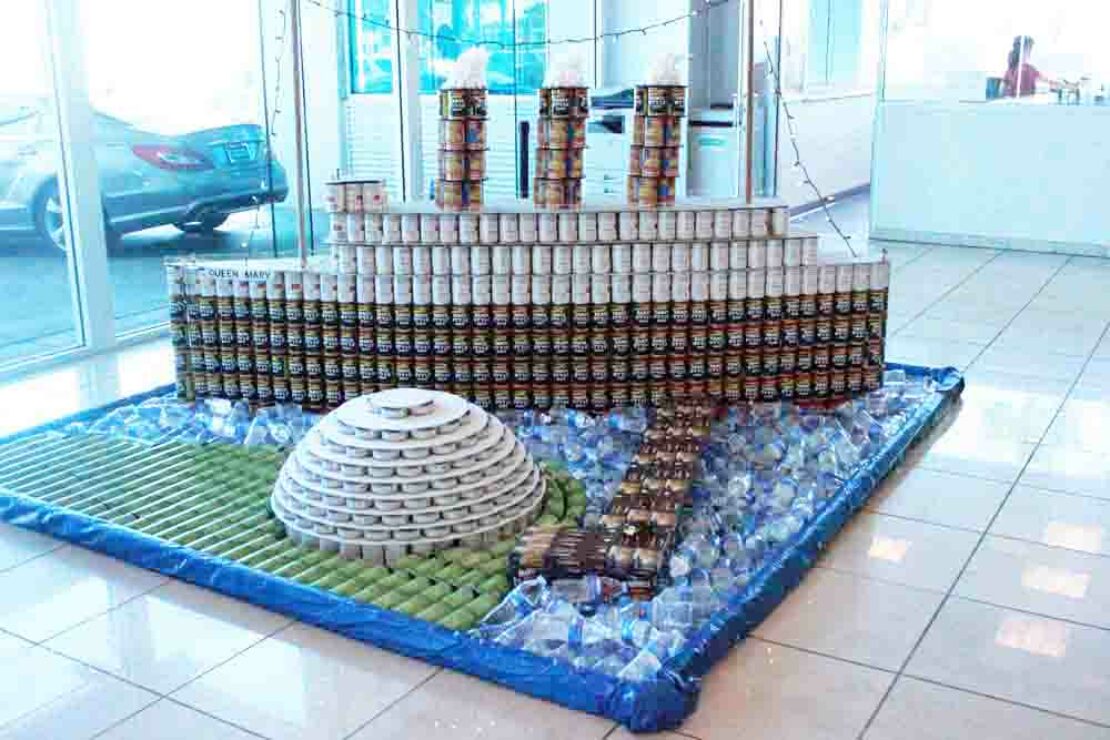 In this file photo: CANstruction’s first effort in Long Beach, 2014. It was built entirely out of cans and empty bottles by PS2 engineering. Somewhere floats an analogy. Photo courtesy of CANstruction.

In Los Angeles County, where it is estimated that one in five residents are food insecure according to Los Angeles Regional Food Bank, raising awareness of the issue is of utmost importance, said Henry.

“I think the general public just has no idea what kind of concern this is in our own backyard,” she said.

While it is up to each team to supply its own cans, either through purchasing them directly or arranging donations, Henry tries to secure a donation as well to assist the teams, and this year, S&W Beans has supplied a donation of two pallets, totaling about 4,000 cans.

The event was initially founded by the late Cheri Melillo in 1992, who was inspired by trial competitions held in Denver and Seattle. Since then, 140 cities worldwide have participated, donating over 15 million pounds of food to combat food insecurity.

While the first official event was held in New York in 1993, Henry first introduced CANstruction to Long Beach in 2014 while working with Food Finders as a client at her marketing firm, terri henry marketing. Although she no longer works directly with Food Finders, the organization continues to be the event’s beneficiary.

The number of participating teams has fluctuated over the years, and this year, three teams (local architectural and engineering firms Critical-Structures, Inc, Tuchscher Engineering Group and PCL Construction Services) will participate.

“I would love it to keep growing, Orange County has probably 19 participants every year and I think they turn people away, and L.A. has not done an event since 2016,” said Henry. However, she will be organizing the Los Angeles-based event beginning next year.

Participating teams will be awarded in categories such as best structural integrity, use of most canned goods, the best meal created from cans utilized, and the people’s choice, which can be voted on by visiting the structures at The Cove Hotel and contributing a canned food donation. Bins will be placed in front of each structure to donate and vote for a favorite.

“It’s my favorite event all year, I love it, I think it’s for such a great cause, and it’s such a cool visual,”  Henry said.

Visitors can view and vote on their favorite structures from Sept. 15 to Sept. 25 at The Cove Hotel, 200 E. Willow St.