I was sitting at my desk last week looking out the window, because part of the job of writing is looking out the window, and my eyes stumbled upon the Long Beach flag, along with the beautiful California flag and the American flag, which has inspired plenty of laudatory and florid odes. And it struck me how hideous the Long Beach flag looks, especially when flown alongside, though never as high as, the two superior flags.

Do you even know that Long Beach has a flag? Do you know what it looks like? Would you wear a Long Beach flag T-shirt, if anyone was in such a hurry to take a financial bloodbath to manufacture such a thing? Maybe. Maybe you would if you wanted to win an ugly T-shirt contest or want to go trick-or-treating as a walking business card for a mid-1960s-era public administrator.

Trash-talking about the Long Beach flag gets easier if you can turn your eyes away from the horror for a moment to check out its dubious and immensely uninspired history. I think I could go unchallenged if I said never was less effort put into the design of a flag.

In the early 1960s, it was determined that Long Beach needed a flag and the city held several design contests, with submissions coming in from area artists and other creative types, but city administrators didn’t like, or couldn’t agree, on any particular design.

Eventually, perhaps growing tired of the chore, it was decided to just swipe the Port of Long Beach’s flag, which was designed in 1964 by Harbor Department Director of Administration Al Maddy who was, demonstrably, not an artist.

The port’s logo was removed and the city seal of Long Beach was inserted in its place, and the port’s name was deleted and replaced with the words “City of Long Beach, the International City.” Boom. Done. Approved in 1967. People put more thought into what kind of potato chips to buy with their lunch, and those decisions are never as aesthetically disastrous. 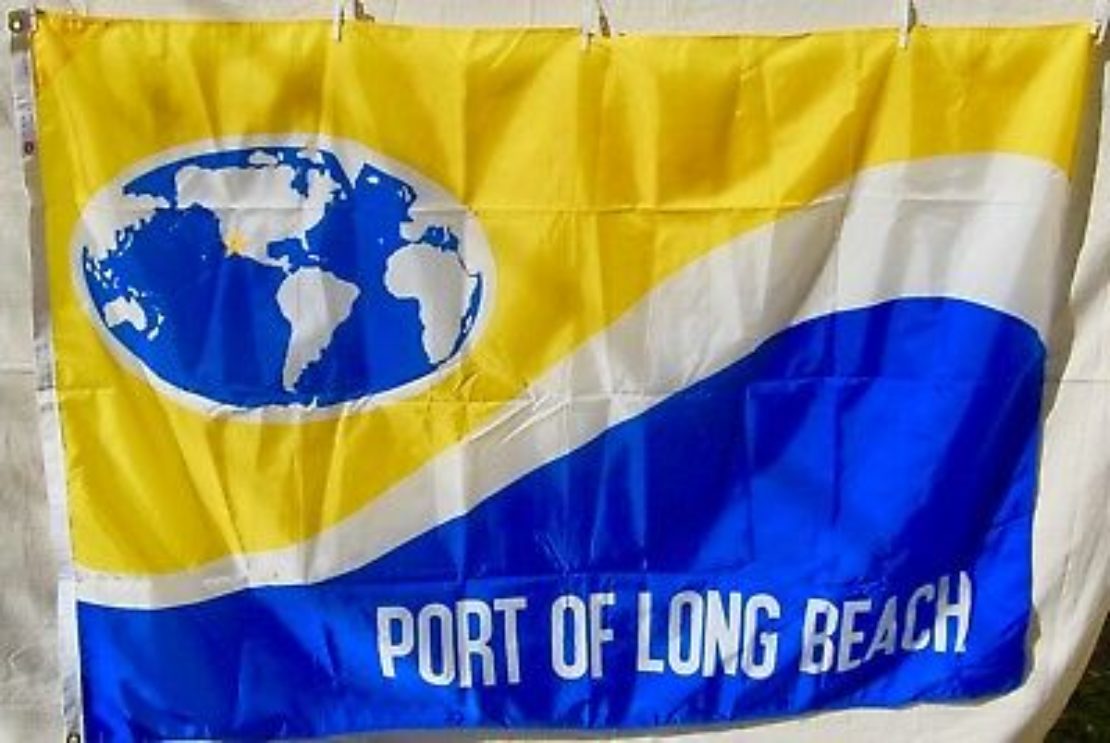 Port of Long Beach flag, the “inspiration” for the Long Beach city flag.

Roman Mars, the producer and host of the 99% Invisible podcast, gave a remarkable TED talk in 2015 called “Why City Flags May Be the Worst-Designed Thing You’ve Never Seen,” in which the design buff discussed vexillology, the study of flags. He made a couple of sort of wry observations that could pertain to Long Beach’s flag. “Good design and democracy don’t go together,” and “If you have to write the name of your city (on its flag), your symbolism has failed.”

Perhaps the most renowned vexillologist in the country is Edward Kaye, who wrote the bible on flag design, “‘Good’ Flag, ‘Bad’ Flag: How to Design a Great Flag,” and it’s just a 16-page bible that you and our current city leaders can download for free. It includes five basic rules for a great flag, most of which were not considered by the pencil-pushing designer of the Port of Long Beach flag, and by dint of vexillological plagiarism, the Long Beach flag.

The incorporation of the city seal is perhaps the most egregious design flaw in our flag. The North American Vexillological Association in 2004 ranked the flags of 150 U.S. cities and Long Beach came in at No. 90, and most of the cities below it on the list also incorporated, or used solely, their city seal.

Long Beach’s seal, adopted in 1931, is a problem all by itself, with more than two dozen elements crammed inside a circle, dominated by a way overdressed and somewhat zaftig Queen of the Beaches. Elsewhere, there are such long-departed or outdated fixtures of the town, including the Rainbow Pier, the Municipal Auditorium, a tri-motor airplane, the motto Urbs Amicitiae (the Friendly City), and a grab bag of miscellaneous items: a bear, a cornucopia, some factories spewing smog, and an Aladdin’s lamp perched on a book. 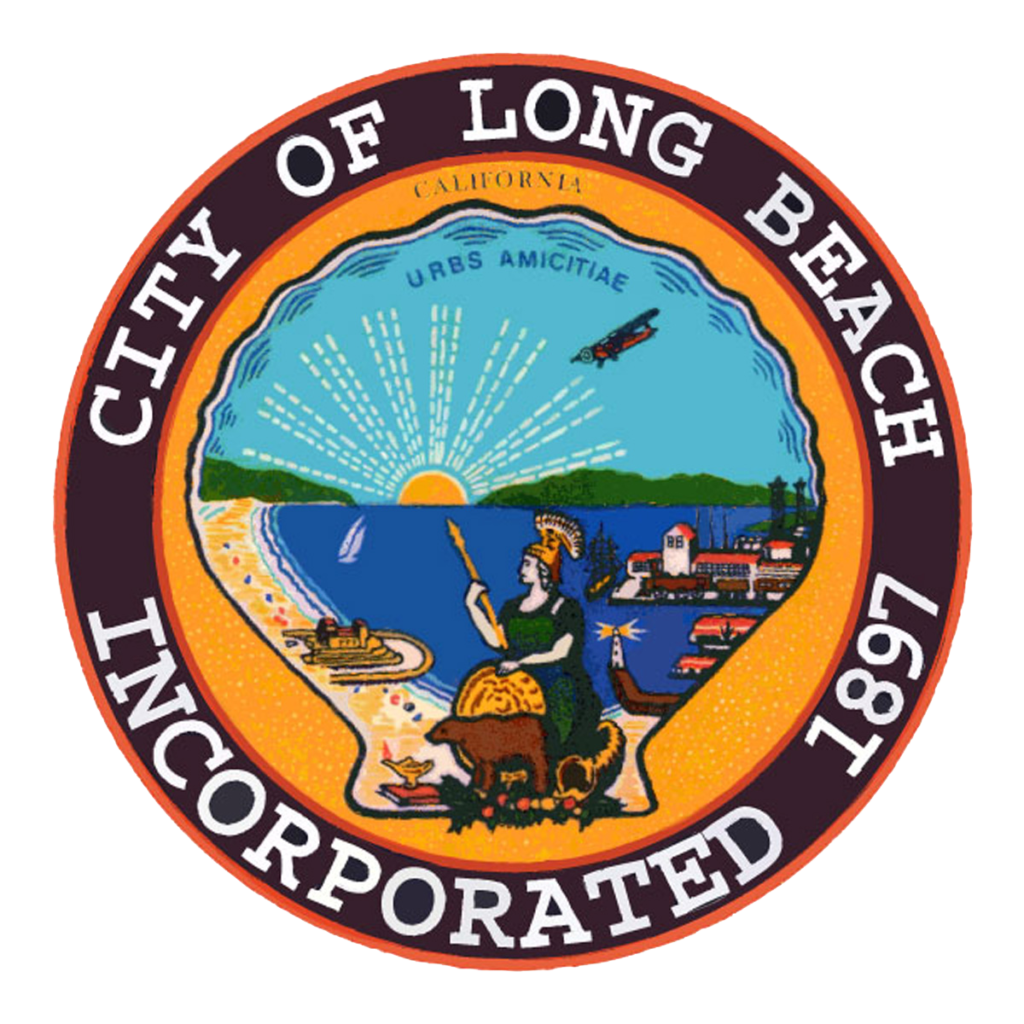 The 1931 seal was itself an update from the city’s original seal, which was described in a 1920 cry for an update as “showing a little platform sticking out in the water with a boat apparently about to run into it.”

Obsolescence and progress are the bane of city seals. There was a movement afoot to update our current seal in 1958, but that, too, would’ve been outlived by the city by now as its proponents back then suggested it include a Douglas “plane of the future” (Douglas was bought by Boeing in 1997 and Boeing’s last C-17 flew off in 2015), the USS Long Beach atomic cruiser (decommissioned in 1995), and a nod to the Miss Universe Pageant (which left for Miami after the 1959 contest).

City seals work fine on the sides of city vehicles, three-ring binders, letterhead or windbreakers, but they’ve got no place on a fluttering flag, and a redesign, which is sorely needed for our city’s flag, should not include one.

There’s a lot of Long Beach residents’ minds these days regarding change as we struggle into an unsettling, uncertain future, and to ease that journey by making changes for the better—and that’s everything from taking a hard look at who we’ve been honoring with our schools’ names to reforms in government and policing.

Long Beach will emerge from the current waves of anger and protest, just as it will also, somehow, emerge from the ravages of the pandemic, a city different in ways that are impossible to imagine.

The only thing certain is change, and a new flag and, possibly, a new seal are things that should change as well, if for no other reason than to reflect what it is when we think about all that’s good with Long Beach, its people, its heritage, its industry, its beaches and everything else we’d like people, whether they’re residents or visitors, to think about our city.

That’s a lot to consider and I don’t mean to clutter up the flag again. Good design doesn’t mean dumping all of the above into a flag. Keep it simple and beautiful, because Long Beach, for all its faults, is still a beautiful city, and it will still be beautiful after our recent historical and ongoing troubles, and it deserves a flag that symbolizes the fact.

If you have ideas for a design that would make a (much) better flag or seal for Long Beach, the Post would love to see them. And we’ll make sure the right people see the best ones. You can email your designs to me at [email protected], or send them by mail to Long Beach Post, 211 E. Ocean Blvd., Suite 400, Long Beach, CA 90802.