When Executive Director Dan Knapp first began teaching environmental science to L.A. Conservation Corps members 25 years ago, he expected the students to be just as enthusiastic about the environment as he was.

With plans to teach the students about the importance of urban forestry, recycling, habitat restoration and more, he realized what was holding many of his students back.

For the Conservation Corps of Long Beach, which is one of 14 certified corps in the state and over 100 nationwide, it is an opportunity to earn a high school diploma while gaining valuable work experience and skills.

“I just had this cathartic moment early on in my tenure there, that the fight for the environment is not out in the desert, or up in the Sierra or in the Redwoods, it’s here in the city— We’ve got to get more folks exposed, we’ve got to get them more engaged, and we also have to help them get excited,” said Knapp. “I’d like to say I didn’t drink the Kool-Aid, I guzzled it. Now, 26 years later, I’m still doing it.”

In the organization’s earlier days and up until 10 years ago the majority of participants, who are between the ages of 18 and 26, had dropped out of high school. Nowadays, roughly half of the current group of 80 members are in college, mostly at the community college level, with a handful at Cal State Long Beach, UCLA and Cal Poly Pomona. About 30% did not complete high school and are currently enrolled in the Corps’ state-accredited charter high school program.

While achieving a high school diploma is a requirement of the program, the Conservation Corps supports its members in continuing their education past high school, through assistance and connection to scholarships.

“We’ve had some extremely successful young folks come through our doors,” said Knapp. “We can’t take credit, but what we provide is just opportunity.”

Apart from assistance with education, the organization’s support services have connected participants with anything from legal services to housing, which is one of the largest obstacles facing many Corps members.

“We had a big contract with the Catalina Island Conservancy to help them grow a new campground,” said Knapp. “I thought a lot of our folks signed up because they wanted to go camping, they were like no, we don’t have to worry about where we’re gonna sleep.” 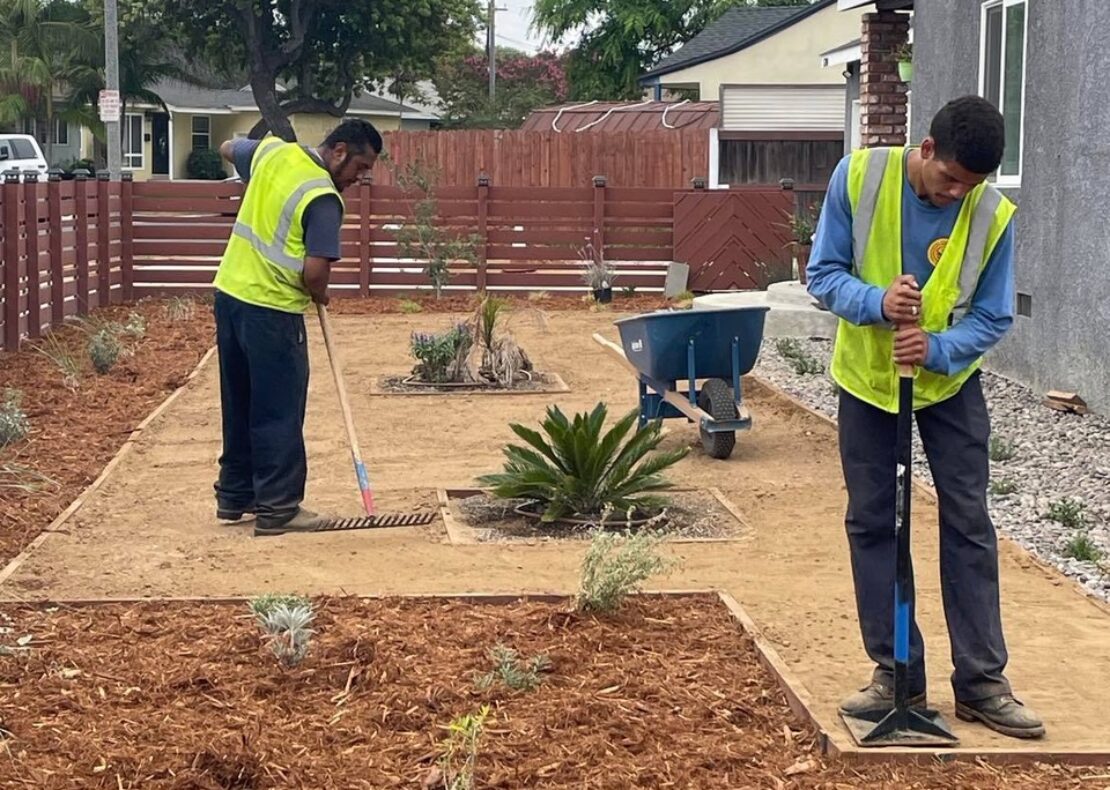 After three months of involvement (enrollment generally runs from 10 months to three years), participants get to choose what path to pursue, with myriad skill sets and training available to them, primarily focused on conservation.

‘When I first came through, my biggest challenge was convincing people we weren’t the Conservation Corps of 10 years ago,” said Knapp.

Since Knapp became the Long Beach Corps’ executive director, he has focused on expanding the complexity of projects offered to its participants.

Knapp estimated that the budget has grown at least five times over the past few years, allowing for more sophisticated projects and robust training.

Particularly over the past five years, the organization began bringing on subcontractors, allowing the Corps’ scope of projects and job pathways to expand.

“A lot of folks were often time born in a circumstance out of their control,” said Knapp. “A lot of our bigger challenges are a lot of our folks didn’t have a lot of structure, they were on their own from an early age and trying to figure it out.”

When additional needs arise throughout the year, Corps members can assist, such as with local fire or erosion control. During the pandemic, Corps members even erected all the temporary testing facilities and did food distribution throughout Los Angeles.

“As a Corps member, we always say we don’t run away from disaster, we run toward it, we’re here to serve,” said Knapp. “It’s that sense of leaving something tangible, whether it’s a tree in the ground, or building a new satellite site at DeForest Park.”

The opportunity to explore different career paths is what keeps many members engaged and involved, said Knapp.

For the Conservation Corps participants who are formerly incarcerated, the program provides a second chance, said Knapp— a chance to start earning a steady income, receive education, and gain valuable work skills that can act as a stepping stone toward a future career.

“I love that we’re open to a lot of reentry folks, a lot of times employers don’t give those folks an opportunity,” said Knapp. “In my experience, some of the best, most productive, earnest folks I’ve ever worked with were in the justice system … They don’t want to squander that opportunity.”

While participants don’t always love the structure and rules at first, Knapp said, it’s a second chance program, and the Corps will always rehire.

“The rules are there because we care,” said Knapp. “If folks make it past that month, two months for sure, they’re hooked on a sense of belonging to something bigger than them, structure, a sense of pride.”

While many people may become involved with the Corps for the chance to earn an income, what keeps many involved is the camaraderie and the sense of giving back and being appreciated in the community, said Knapp.

“The community is getting something tangible, real, and in return, the young folks are getting jobs skills, structure they haven’t had, and I think they really crave that and cherish that, and a sense of service to their community and a sense of giving,” Knapp said.

The Conservation Corps of Long Beach accepts participants year-round. Become a Corps member or get involved by making a donation.

Editor’s note: This story has been updated to reflect that program participants are between 18 and 26, and they can work to achieve their high school diploma.