A man and his dog near were hit and killed by a driver fleeing from officers after a burglary last night, Long Beach police said.

Security camera video from an apartment building shows the victim legally walking his dog in a crosswalk at Magnolia Avenue and 6th Street when the driver runs a red light and slams into them.

The property manager for the apartment building, Alex Galdamez, said he found the video when he checked the security cameras after seeing cops swarming the area.

The video shows the car hitting the man and his dog at high speed. A moment later, a police cruiser follows into the intersection.

“I was left with my mouth open,” Galdamez said about seeing the video. 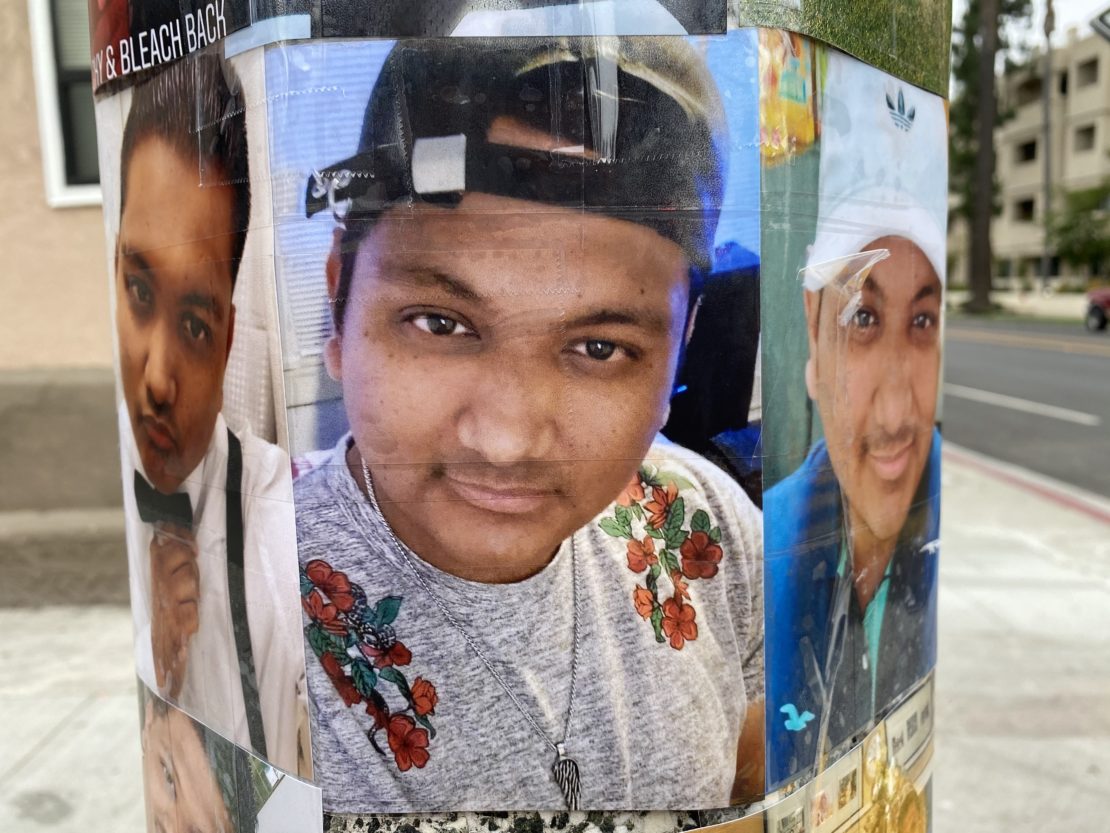 Pictures of Jose Hernandez taped to a utility pole at the intersection of Magnolia and 6th Street, where he was allegedly killed by a driver fleeing police on May 26, 2020. Photo by Jeremiah Dobruck.

Authorities said the crash that killed Hernandez happened shortly after 11:10 p.m. Tuesday, which is when officers were called to a burglary at a licensed “marijuana related business” in the 2100 block of Gaylord Avenue, in an industrial area of West Long Beach.

“The calling party advised that suspects were inside the business cutting down marijuana plants,” police said in a news release.

Officers got to the business within 2 minutes and were able to take 3 suspected burglars into custody, but another one took off in a 2016 Mercedes-Benz GLE, and officers gave chase, according to LBPD spokesman Ivan Garcia.

“The pursuit lasted approximately five minutes and included both surface streets and the 103 and 710 freeways,” police wrote.

After getting off the freeway, the driver hit Hernandez and his dog at Magnolia and 6th street, police said. The driver then crashed into a fence near Pine Avenue and 6th Street where police said they were able to take the driver into custody. Police suspect the driver was under the influence of drugs.

Authorities identified him as 26-year-old Jyvante West of Richmond. He was booked on suspicion of gross vehicular manslaughter while intoxicated, hit-and-run resulting in death, driving under the influence of drugs causing injury, evading a police officer, commercial burglary, and conspiracy to commit a crime.

Nobody else was inside the car with West, but police found two more people when they searched the marijuana business, bringing the total number of arrests to 7, Garcia said.

Editor’s note: This story was updated with more details from police, including Hernandez’s name.