As coronavirus cases surged recently, restaurant owners in Long Beach knew the hammer of renewed COVID-19 restrictions was probably coming, but that didn’t do much to lessen the blow this week when they got a glimpse of what life might be like for the next few months.

“Business is not fun right now,” John Morris, general manager of Boathouse on the Bay and part owner of Legends Sports Bar, said after hearing his restaurants were about to be put under a curfew and have their dine-in options further constricted.

Starting Friday, restaurants and nonessential businesses in Los Angeles County must close between 10 p.m. and 6 a.m. Not only that, the county said it was scaling back outdoor dining, limiting restaurants to 50% capacity on their patios, parklets, sidewalks and other outside seating.

Those are only two of the new rules that will further restrict everything from bars and breweries to barbers and nail salons.

And if COVID-19 conditions continue to deteriorate, county officials said, it could mean the return of a stay-at-home order, which closed all nonessential businesses and limited essential ones to pick-up and delivery only.

Although LA County doesn’t have direct control over whether the Long Beach Health Department institutes the same rules, Mayor Robert Garcia said Wednesday that the city will likely instate similar restrictions, including limits on outdoor capacity and curfews for bars and restaurants.

“The major themes of these restrictions will look similar,” Garcia said. “The best way that we can get businesses back open is for people to stay safe and be responsible.” 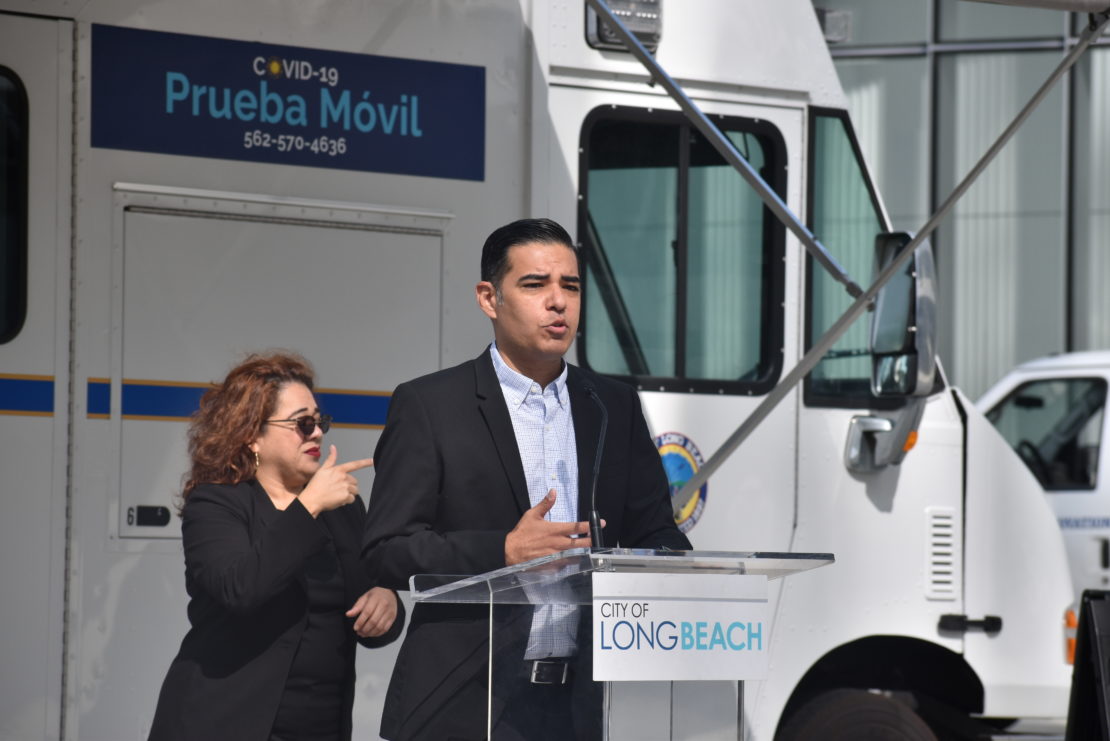 Long Beach Mayor Robert Garcia said during a press conference Wednesday that the city would likely be imposing similar restrictions as the county’s. Photo by Sebastian Echeverry.

The new regulations aren’t a complete surprise to businesses. At Liberation Brewing Company in Bixby Knolls, workers had already been pre-packaging more beer, hoping the sales will carry them through what co-owner Dan Regan called an “oncoming storm.”

Overall, Regan estimated, his industry is already down about 80% during the pandemic with a small 10% boost coming from expanded outdoor dining.

Now that lifeline, too, could shrink as health officials try to blunt an explosion of new infections that’s sent the rate of new cases in Long Beach 40% higher over the last two weeks. In Los Angeles County, the sudden surge is even worse, with the rate of new cases nearly doubling in just a week, health officials said. Both jurisdictions have warned that the trend threatens to fill up local hospitals if it continues unabated.

Health officials in Long Beach and Los Angeles have pointed to private gatherings like Halloween parties and celebrations for the Dodgers and Lakers championships as likely drivers of the spread.

People under 30 have accounted for a large portion of the new cases and are spreading it to older residents who are suffering more severe consequences, LA County public health director Barbara Ferrer said.

Garcia appealed in particular to that younger demographic in Long Beach, noting that cases in that age bracket had increased significantly.

“To all the young people out there: This is your moment to be brave and to be responsible, and to take care of your family,” he said.

Garcia, who lost his mother and step-father to COVID-19, said this surge is a warning to forgo time with loved-ones and friends outside your household if you want to keep them safe.

“If folks want to have Thanksgivings and Christmases and holidays in the future with their families, they should sacrifice this year,” he said.

Warnings like that though, have led some business owners to question why they’re bearing the brunt of the restrictions—risking their livelihoods while officials lay blame for the outbreak elsewhere.

“Ninety-nine percent of the restaurants are doing the right thing. Why harass them?” asked Morris, who said he’s seen a parade of inspectors come through his businesses.

Garcia said stricter limits on private gatherings are also coming. The county has already said outdoor gatherings must be limited to no more than 15 people from a maximum of three households.

Giving the trend in cases, the news restrictions were unavoidable, according to Garcia. For now, he said, everyone needs to bear the pain.

“If we don’t take action today, we’re headed in a direction that there would be massive disruptions or a larger shutdown,” he said. “We’re trying to avoid that.”

To help businesses carry through a new round of restrictions, he said the city may explore options for expanding the surface space available for outdoor seating.

Morris said he’s lucky to have a location that’s let already him have expansive outdoor dining, something that can hopefully carry him through the latest round of restrictions.

But, he said, “I feel so bad, so bad, for these places that just have a small space for diners. I’m dreading the thought that they’re gonna close. And with the holidays coming, restaurants are losing their Christmas parties. That’s huge. I just see the end of December having many ugly business closures.”