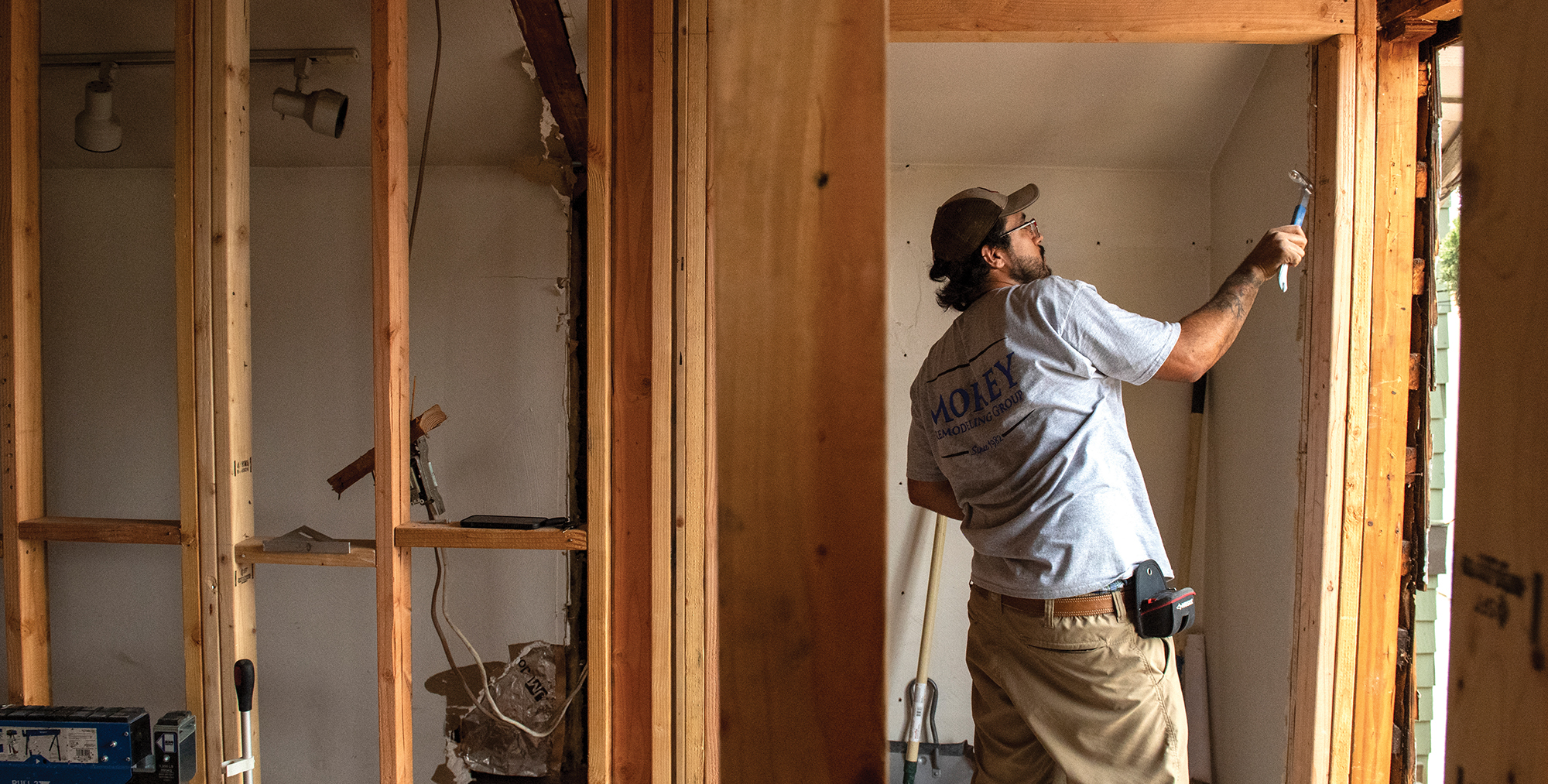 Markus Pharr works on an apartment above a detached garage on a home in Bluff Heights in Long Beach Tuesday, August 17, 2021. Photo by Thomas R. Cordova.

The California housing market is booming, and with it the demand for home improvement work. Soaring prices and fierce competition for single family homes have forced some homebuyers to settle for properties that need major repairs to be livable or don’t quite fit their taste, sending them looking for contractors and pulling permits to renovate and remodel.

“We are slammed,” said Angelika Mayer, office manager at upscale home build contractor Zieba Builders. Currently, the company is booked out through spring next year, Mayer said. “I haven’t seen a slowdown in the phones ringing.”

When Michael Kolana Kek and his wife Monique received a note from their landlord that their building was up for sale last year, they decided it was time to buy a home of their own. With a baby on the way, the couple began looking for a single family home and found themselves squeezed by the high demand in the residential real estate market.

With the Millennial generation entering home-buying age and mortgage rates at record lows, the market for single-family homes has boomed in recent months. It’s not uncommon for eager buyers to offer more than the asking price or make other concessions to beat out the competition, something Kek and his wife experienced first hand.

When the couple finally found a Lakewood home they could close on and afford, they began looking for contractors to make it their own—which turned out to be a bigger challenge than expected.

Low mortgage rates, similar to their effect on home buying activity, have also driven up demand for home improvements. Savings from refinanced mortgages or increased equity created by home price appreciation have many homeowners deciding to finally go for that kitchen remodel or open up the living room.

As a result, recent buyers like the Keks face equally stiff competition in the market for contractors as they did on their hunt for a home.

“It’s been a bit of a struggle to find good and affordable work,” Kek said.

Contractors would flake, quote astronomical prices or simply not call back. Contractors say the increased cost of building materials—from lumber to copper wiring—has forced them to hike up their prices. Materials are in short supply as demand for construction increases and the ongoing coronavirus pandemic keeps supply chains vulnerable.

Business Insider reported in May that over 44% of home improvement plans across the country have been delayed due to supply shortages and high material costs, citing data from market research firm, Cardify.ai, which uses transactional data to generate reports on consumer spending.

In the end, the Keks “piecemealed” the work together at times using Taskrabbit—an app designed to help users with everyday tasks, like cleaning, moving or handyman work—to find workers for their renovation projects.

Workers, too, are highly sought after at the moment. Job openings in the construction industry are up 43% since the start of the pandemic, with employers looking for 339,000 workers nationwide, according to the latest data published by the Bureau of Labor Statistics. In Los Angeles County, 4,300 jobs were added in the same timeframe, according to data from the state’s Employment Development Department.

Some new homeowners have opted to do at least a portion of the work themselves. Rodrigo Fosado, a 35-year-old accountant who recently bought a home in Los Altos, said he’s taught himself how to put up drywall, do electrical work and put in new doors.

“We became contractors ourselves,” Fosado said of his family of four. Most of his education came from online tutorials. “The YouTube videos definitely helped,” he said, laughing. 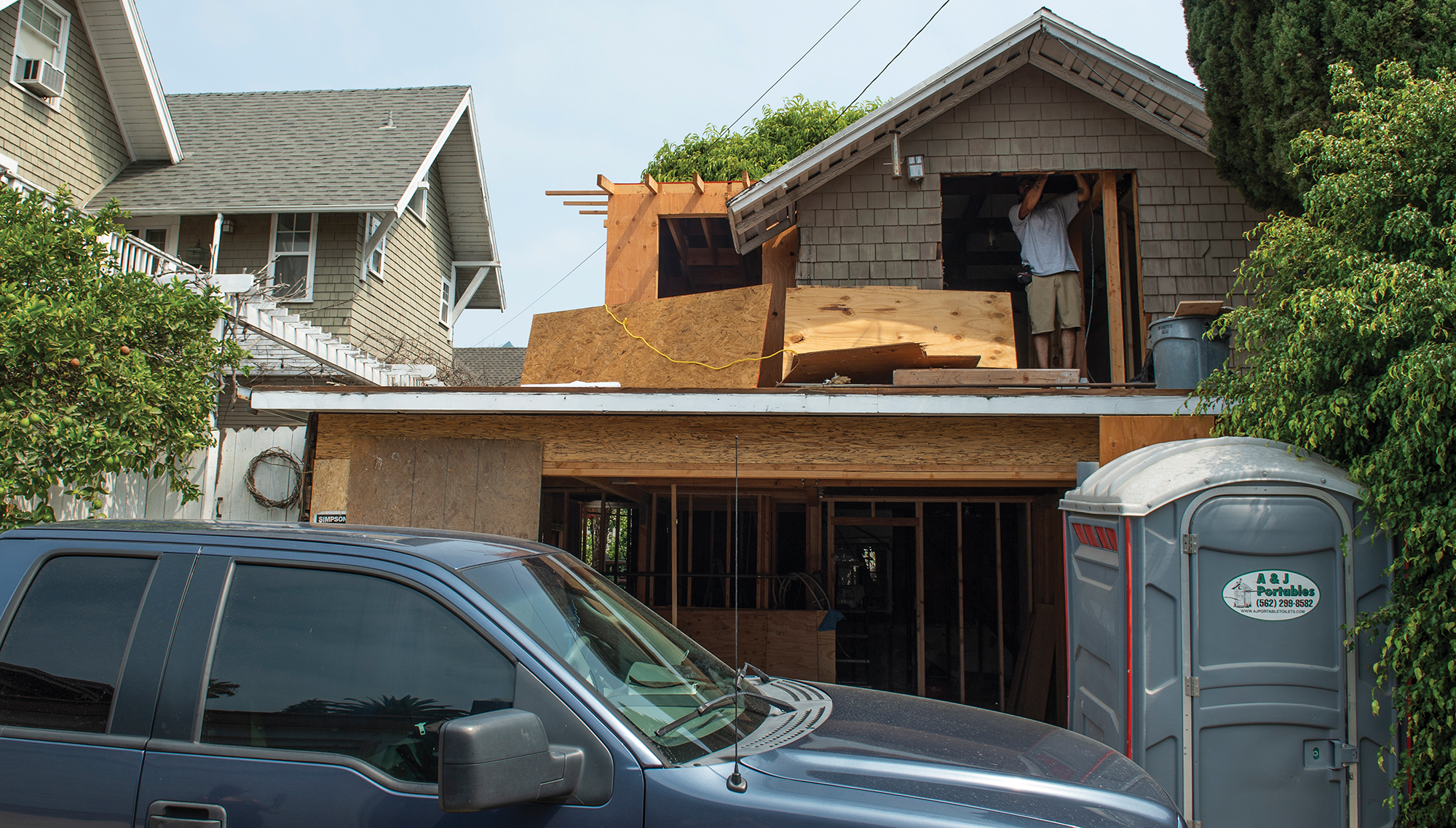 Through an opening, Markus Pharr works on an apartment above a detached garage on a home in Bluff Heights, Long Beach Tuesday, August 17, 2021. Photo by Thomas R. Cordova.

Meanwhile the city bureau in charge of processing and granting permits for anything from kitchen remodels to the construction of multi-family complexes is undergoing an effort to upgrade its technology, all while struggling to attract and retain staff.

In a May 11 memo to the city manager, council and mayor, the Department of Development Services, which houses the bureau, admitted that its processing times, customer communications and overall development review process had not met “the city’s goals nor the needs or expectations of our customers.”

In response, city councilmembers, led by Councilman Rex Richardson, approved a city initiative to review the city’s hiring practices, review the bureau’s permitting software and explore the implementation of a “shot clock,” which would set a timeframe within which applications have to be processed.

Despite recent efforts to improve the department’s services, staffing and technology remain “primary challenges,” as identified by the department in a memo published on Aug. 10.

For the last three months, the department has worked to further staff up the bureau, aiming to replace temporary workers and employees pulled from other departments with full-time staff. But finding and retaining staff has been challenging, said Building Superintendent David Khorram, in part because of competition from surrounding cities that pay higher wages.

“Other cities love to snatch our people,” Khorram said, adding that it’s not uncommon for Long Beach to identify a qualified candidate just to have them poached by another city before they’re even brought on as a staff member.

The other challenge, technology, is also still being addressed. The department recently upgraded its application portal to allow for more types of applications to be submitted digitally by a broader spectrum of applicants; previously only large-scale, “frequent flier” contractors were able to submit online.

While the industry at large has long been working with a wide range of digital tools, government entities have lagged behind, Khorram said. “We were behind that cycle and we’re paying the price now.”

In addition to the systems upgrade, the bureau has also resumed in-person appointments for express and over-the-counter permits, which cover most basic changes, like putting in new windows, reroofing or adding new plumbing fixtures.

In the second quarter of this year, which covers the months of April, May and June, the bureau processed 2,805 permits and serviced 538 applicants in person, compared to 1,886 permits processed and no in-person appointments in the previous quarter. The backlog on plan check appointments for larger projects currently stands at 3-4 weeks, according to Khorram.

The pandemic and its challenges have taught the bureau a lot and accelerated its modernization, Khorram added. “It will be painful for a while,” he said. But, “I think when we come out of it, we’ll be much stronger for it.”