Protesters pray outside a library in New York City as Flame, a drag queen sporting a bright wig and a red gown, entertains the children inside by singing the ABCs, leading a coloring activity and reading books about how it’s OK to be different.

Outside Chicago, protesters harass parents attending storytime with their children and proclaim that the staff operating the event came “from the devil.”

After focusing on transgender athletes and youths, anti-LGBTQ rhetoric is now targeting drag storytimes—conceived as a way to educate and entertain children by appealing to their imaginations—with interruptions and other protests reported across the country in the past two weeks, since Pride Month began.

Organizers of the story hours say that social media accounts are fueling the backlash and that opponents claiming they want to protect children are actually scaring and endangering them. The organizers said they will enhance security but won’t stop their programs.

The reading groups have faced pushback from the beginning, but the recent vitriol is new, said Jonathan Hamilt, executive director of Drag Queen Story Hour and the co-founder of the New York chapter.

“Being a part of the LGBT community and a queer person in general, we’ve always experienced hate and slurs and homophobia and transphobia. That’s unfortunately just part of our existence,” Hamilt said. “All this feels different and very real, and it feels a bit scarier.”

Drag Queen Story Hour, a nonprofit, was started in San Francisco in 2015 by activist and author Michelle Tea. Chapters have since opened across the U.S. and elsewhere.

In 2017, the reaction to an event in Long Beach may have foreshadowed what’s now happening across the country. After an image of drag queen Xochi Mochi reading to kids at the Michelle Obama Library began circulating among conservative social media accounts, furor about a “demonic” influence on children built as the picture spread to far-right websites such as Infowars and The Gateway Pundit. 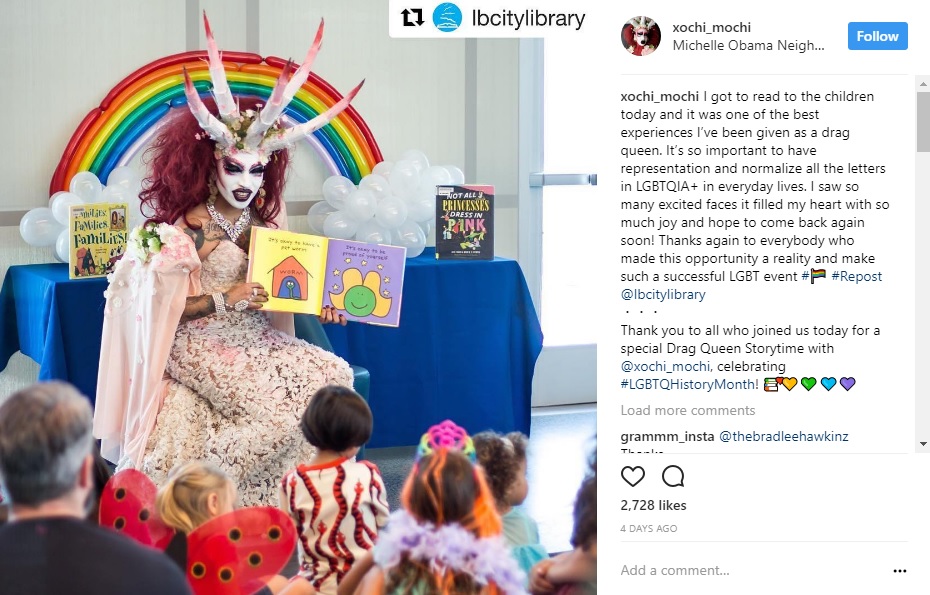 A screenshot from Xochi Mochi’s Instagram in 2017 after she performed at a drag story time event in Long Beach.

Other organizations with readers in drag have also formed. Last month, for instance, The Aquarium of the Pacific hosted a drag story time as part of its Pride event.

As part of Drag Queen Story Hour’s programming, drag queens read to children and their parents at libraries, bookstores, fairs, parks and other public spaces to celebrate reading “through the glamorous art of drag.”

Last weekend, as the library hosted its second such event, at least five men—one of them wearing a T-shirt showing a rifle and the words “Kill Your Local Pedophile”—walked in and began hurling insults at Panda Dulce as she read to children and their parents, Chadwick said.

“The horrible irony of it was they said over and over, ‘We’re here to protect the kids.’ And it was the kids they were terrifying. The kids were afraid of them, and the kids were there with their parents who had brought them to this event,” Chadwick said.

A spokesperson for the county sheriff’s office said the men, who identified themselves as members of the Proud Boys, are all residents of the Bay Area. The episode is being investigated as a hate crime.

The Alameda County Library, which continues to receive threats, now plans to host a Pride event each month for the rest of the year, Chadwick said, and the sheriff’s office will provide security.

The library event was mentioned on a right-wing Twitter account that, along with other social accounts, has framed drag queens as abusive, depraved “groomers,” Chadwick said. The same account shared a promotion for a “Kiddie Korner” at a Pride event in Waukegan, Illinois, that was to include a drag storyteller and dress-up bin.

It resulted in dozens of angry calls and messages, said Nikki Michele, executive director of the nonprofit LGBTQ+ Center Lake County, which ran the event.

The event was interrupted by protesters who tried to film children and yelled at their parents, Michele said.

In Mahwah, New Jersey, a flyer disseminated online and left on doorsteps and in condo lobbies misrepresented a drag performer as a “known PORNOGRAPHER” who “normalizes PEDOPHILIA AND ABUSE OF CHILDREN.”

Detractors called local government offices and the Mahwah Pride Coalition in attempts to shut down its storytime event, said Susan Steinberg, the nonprofit’s director. But Angel Lauriano, who performs in drag as Honey Marie, weathered protesters and showed up anyway Monday—in long sleeves—to talk to kids about cats, dogs and their dreams in life.

The protest campaign—as intended—is giving some parents pause about bringing their kids to a space where they could be harassed. But Michele said it’s important to be visible.

“That would be a bad show of faith if my own kids weren’t even there,” Michele said. “But I mean, it did scare me enough that I had that conversation with myself.”

“The term they used at that time was recruitment,” Haider-Markel said. “Now they’ve just switched that to groomers. It’s old wine in a new bottle.”

It’s a strategy conservative candidates are using to motivate white evangelical Christians to vote, according to Randall Balmer, a Dartmouth College historian of American religion.

“The drag queen story hour plays right into their fears that the children are going to be led astray by evil or satanic or alien ideas,” Balmer said.

Several politicians have discussed plans for legislation to ban drag shows for kids or punish parents for taking their kids to one. Among them is Texas state Rep. Bryan Slaton, a Republican.

“Children don’t need to be focused on sex and sexualization, and we need to let them just grow up to be children and let them do that as they’re getting closer to being an adult,” he said in an interview.

While many drag queens are known for risqué and profane acts in nightclubs, Lauriano and others who read to children tailor these performances to be kid-friendly.