A magnitude 7.1 earthquake near Ridgecrest—the same location as a 6.4 quake on July 4—rocked Long Beach and much of Southern California Friday night.

Seismologist Lucy Jones tweeted that the earlier quake on July 4 may have been a “foreshock” to the larger one this evening.

So the M6.4 was a foreshock. This was a M7.1 on the same fault as has been producing the Searles Valley sequence. This is part of the same sequence –

There were no immediate reports of injuries or damage in Long Beach.

Fire department spokesman Jake Heflin said there are several power outages around the city, including at the port and in West Long Beach. 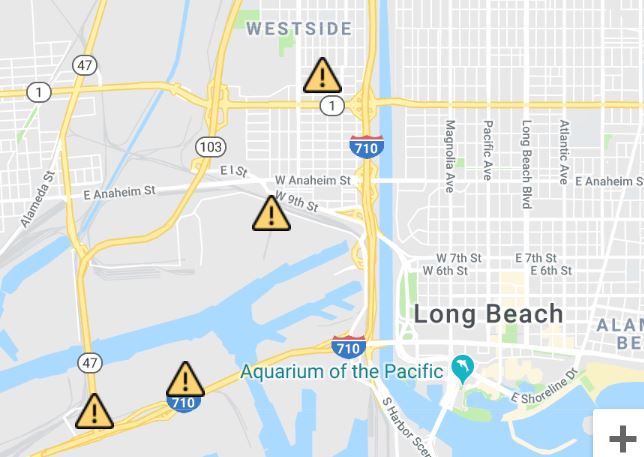 A map of the power outages in West Long Beach and the port after a magnitude 7.1 earthquake rattled the city on July 5, 2019.

The department has also received reports downed wires and transformer fires in the city, as well as several earthquake-related calls in Downtown. There is also one fire station operating on emergency power at this time, he said.

“We continue to monitor for further developments and continue to remain operationally ready to assist our city,” the fire department said in a tweet immediately after the quake.

Long Beach Police Lt. Megan Zabel said the department had not received any reports of problems, but officers were checking critical facilities for any damage. Those facilities included hospitals, the airport and city hall.

The police and fire departments did not find any damage in the city, according to an alert from the city on Saturday.

Metrolink service was halted briefly due to the earthquake, but resumed minutes later.

The U.S. Geological Survey said the quake was centered 11 miles from Ridgecrest in the Searles Valley, about 175 miles from Long Beach.

The quake was felt as a rolling motion that seemed to last at least a half-minute. It was felt as far away as Las Vegas, and the USGS said it also was felt in Mexico.

If the preliminary magnitude is correct, it would be the largest Southern California quake in 20 years.

Earlier Friday, Los Angeles had revealed plans to lower slightly the threshold for public alerts from its earthquake early warning app. But officials said the change was in the works before the Thursday quake, which gave scientists at the California Institute of Technology’s seismology lab 48 seconds of warning but did not trigger a public notification.

“Our goal is to alert people who might experience potentially damaging shaking, not just feel the shaking,” said Robert de Groot, a spokesman for the USGS’s ShakeAlert system, which is being developed for California, Oregon and Washington.

The West Coast ShakeAlert system has provided non-public earthquake notifications on a daily basis to many test users, including emergency agencies, industries, transportation systems and schools.

The quake also rattled Dodger Stadium in the fourth inning of the team’s game against the San Diego Padres. The shaking started when Dodgers second baseman Enriquè Hernàndez was batting. It didn’t appear to affect him or Padres pitcher Eric Lauer.

However, it was obvious to viewers of the SportsNet LA broadcast when the TV picture bounced up and down. Some fans in the upper deck appeared to leave their seats and move to a concourse at the top of the stadium.

The press box lurched for about 20 seconds.

Another earthquake and we felt that pretty strong. Please check in on your neighbors and family. Our city team is out on full alert checking on critical infrastructure and looking for any issues citywide.