The El Dorado Park duck pond is set for a massive overhaul that will close the East Long Beach duck destination for about a year as repairs are made to fix leaks, improve ADA access and transform it into a recycled-water reservoir.

Councilwoman Stacy Mungo Flanigan said the improvements to the pond will increase water circulation to improve water quality, smooth out sidewalks and portions of the parking lots that have buckled over the decades, and create a better home all around for the scores of waterfowl that make their homes there.

The $4.55 million project will also improve green space around the pond by installing new wetlands areas around it while transforming the pond into a water reservoir that will be used to irrigate the neighboring El Dorado Park Golf Course. Funding for the project is expected to be split between Measure A revenue, the Long Beach Water Department and Measure W funds.

Using the pond as a reservoir is expected to free up about 10% of the city’s capacity to store more water and help eliminate periods where water can’t be captured by city facilities because storage tanks are full.

The constant movement of water could rid the pond of the murky, green stew that the ducks, turtles and other waterfowl currently swim in.

“It will be better for the ducks; right now the water is pretty stagnant,” Mungo Flanigan said.

While Mungo Flanigan is excited that the project is moving forward, she noted that it almost fell through multiple times. 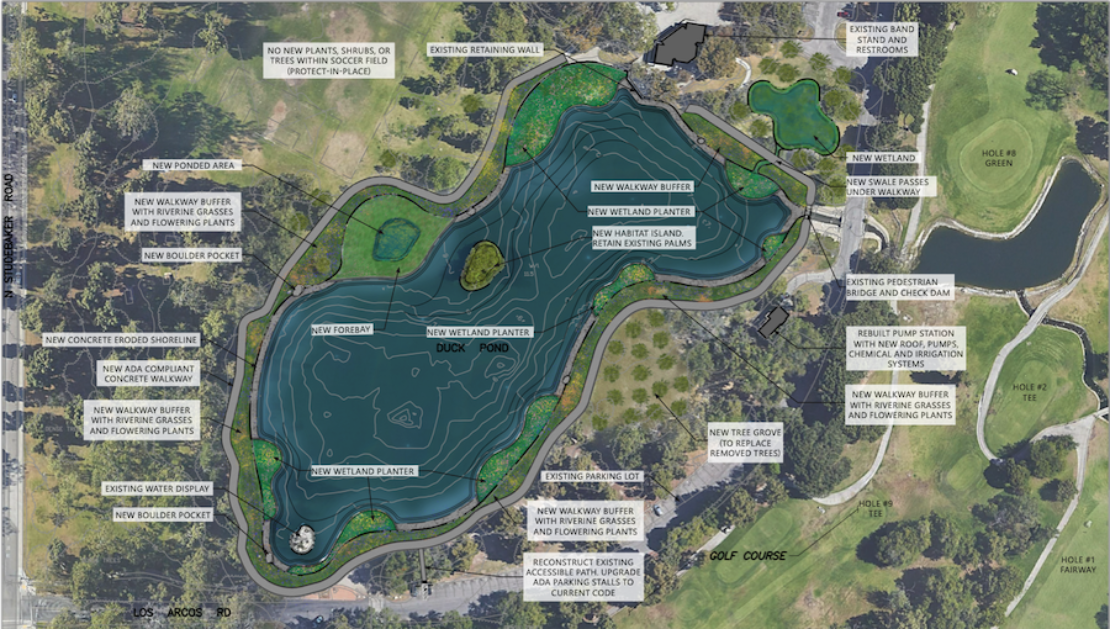 A rendering of the proposed improvements to the El Dorado Park duck pond.

Getting so many different constituencies together to support this project was tough, she explained, but after five years of work the project is now months away from a potential ground-breaking. She said the project had to satisfy multiple groups, including environmentalists, bird lovers and parents who frequent the pond with their children.

“At every turn there was another problem,” Mungo Flanigan said of the effort to get the pond renovated. “It took the collaboration of Public Works, the Water Department, Parks and Recreation and the community to finally get to a point where we can restore what I remember as a beautiful duck pond I went to as a child 35 years ago.”

Once a contractor is selected by the city and approved by the City Council, the pond could be closed for about a year starting in mid-July. However, the window for contractors to bid on the contract has been extended by two weeks and will now close on April 28.

Because the pond will be drained to have a new liner and other elements installed, a fence will be erected around the site. Notices for the construction will likely be posted sometime in June, said Jennifer Carey, a spokesperson for Long Beach Public Works.

No work will be started at the pond until two biological nesting surveys are completed, but Carey said that the city has been assured that the wildlife will naturally relocate, and return when the work is completed.

Some of the animals will require help with relocating. Mungo said the city is working with the Reptile Zoo, a rescue organization in Fountain Valley, to find homes for red-eared slider turtles that live in the pond and are considered invasive species.

Carey said that a lot of the improvements scheduled for the duck pond will be similar to those performed by the city at Colorado Lagoon in 2016 when the lagoon was dredged and plant life was added to help with water quality.

She added that the changes would also make the pond a more efficient stormwater capture tool for the city that it will be able to use for irrigation.

“It’s such a large water facility that it just makes sense that we make better use of it, especially in California,” Carey said.