Editor’s note: Tuesday evening, after this story published, city officials said they were still reviewing the issue but are “working to keep our farmers markets active but with strict physical distancing rules.” They also released a toolkit for farmers markets.

Despite the city of Los Angeles’ decision to suspend all of its farmers markets, they’re still open in Long Beach, and local officials haven’t said whether they’ll follow LA’s lead.

In LA, the decision to temporarily shut down the open-air marketplaces came Monday evening when Mayor Eric Garcetti said he’d been alarmed by the crowds of people potentially spreading COVID-19.

He said operators would be allowed to reopen only if they submit detailed plans to the city for controlling crowds and enforcing “physical distancing.”

In Long Beach, no such plan has been required, but operators have shifted the way they do business since the pandemic hit, according to Lee Ostendorf, who runs farmers markets at Bixby Park and Marine Stadium.

Ostendorf said her markets quickly did away with live entertainment, tables and chairs where people could congregate, and any vendors that sell nonessential items like crafts.

At the city’s request, she said, they went even further by stopping sales of prepackaged food like bread or granola, and doing away with any food cooked on site—although she hopes officials will reconsider some of those restrictions. 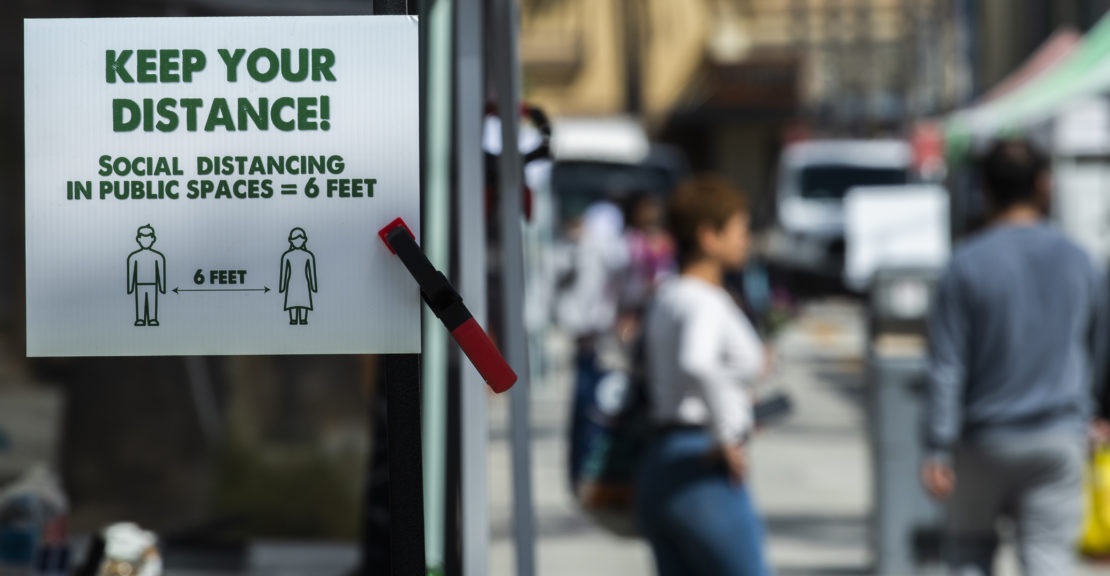 Signs are posted throughout a farmers market to remind people to stay a safe distance away from one another in Downtown Long Beach Friday, March 20, 2020. Photo by Thomas R. Cordova.

Ostendorf said she’s had to gently remind people to keep their distance from other shoppers a few times, but the signs they’ve posted have mostly done the job.

“Honestly, we’ve been surprised about how cooperative people have been,” Ostendorf said.

Farmers markets in other nearby cities like Torrance and Santa Monica have taken further precautions by strictly controlling lines and limiting the number of entrances and exits, the Los Angeles Times reported.

Ostendorf predicted LA’s markets would submit their social distancing plans and be back open soon.

“It’s going to happen very quickly because people are outraged,” she said.

“This is harvest time right now. And it’s coming into more harvest,” she said. “So if they can’t bring it to market, then what do they do?”

Similarly, Long Beach is struggling with what to do with local restaurants that have turned themselves into neighborhood bodegas, something LA County said must stop. Long Beach, however, isn’t included in that order because it has its own health department, which maintains jurisdiction over the city.