Renovations are nearly complete to Fireboat Station No. 15, the Long Beach Fire Department’s 20,000-square-foot facility equipped to handle maritime emergencies at the Port of Long Beach, officials announced this week.

The upgrades include advanced communications technology, a workshop where crews can maintain and repair gear, modern living quarters for a six-member team and a garage large enough to house a fire engine and a second emergency vehicle.

From the outside, the most noticeable feature is the protruding red and white roof that will protect the station’s 11,200-square-foot boat bay from adverse weather. This is the first fireboat station with a protective roof in the port’s history, officials said.

The facility will house the fire department’s fireboat named Vigilance.

Construction of the new fireboat station began in the spring of 2019, port spokesman Lee Peterson said. Assistant Fire Chief Paul Alvarado told the Post they are anticipating for the station to be operational sometime in April. 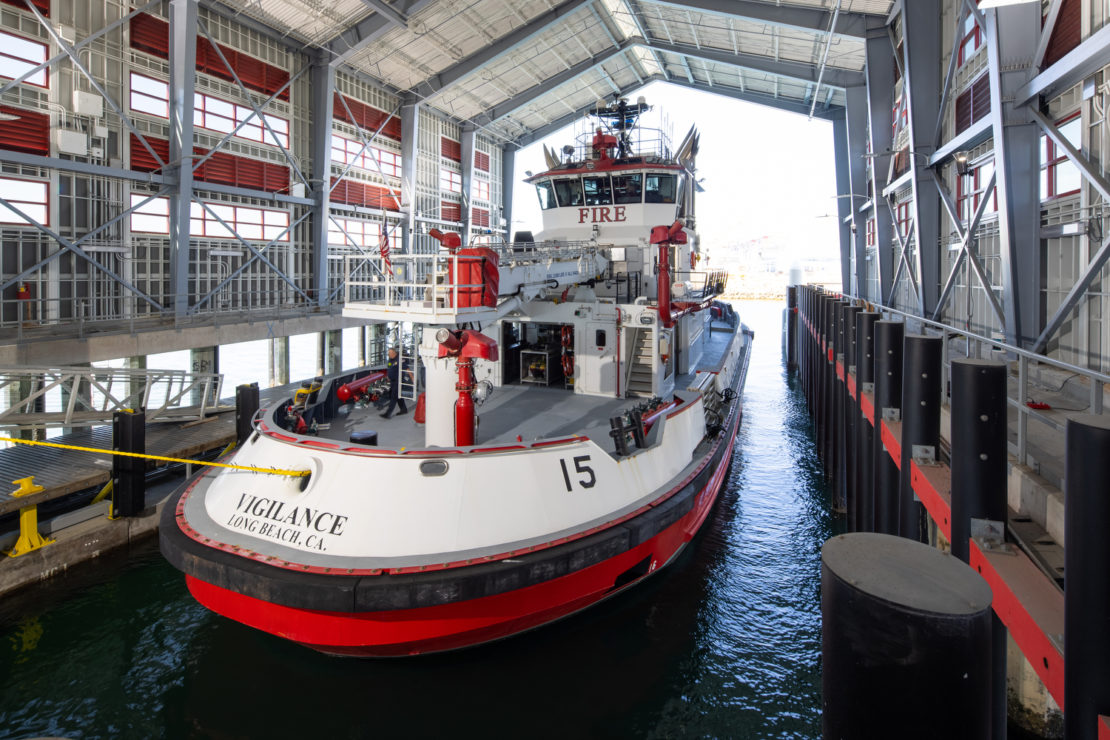 Alvarado added that similar work will be done at another nearby station, Fireboat Station No. 20. On March 8, construction crews began clearing a path for the construction of the second two-story facility, Alvarado said.

The total cost for the two stations is nearly $109 million, according to officials.

“This station will provide the perfect position to respond to both the inside and outside of the harbor,” Alvarado said.

Located at Pier F along the inner mouth of the port, crews working out of the station are equipped to respond to emergencies both on land and sea as well as provide support for other first responders. Fireboat Vigilance can shoot water nearly the length of two football fields and higher than a 20-story building—enough to spray water or foam anywhere aboard some of the largest ships that sail into the port.

Alvarado said fire crews have to be vigilant for potential flammable liquids that may spill off of the container ships and into the harbor.

“It’s important for a harbor district to respond to a port that’s working 24 hours a day, seven days a week,” he said.

Long Beach Fire Chief Xavier Espino said the fireboat can also serve as floating command post in the event of an emergency.

The 9/11 attacks in New York prompted the Long Beach Harbor Commission in 2010 to come up with a plan to modernize the port’s safety infrastructure. Port officials also wanted to have emergency services that could keep up with modern cargo ships that were sailing into the port daily. In total, the plan to upgrade the facilities and equipment cost the port nearly $177 million.

“Our firefighting facilities and equipment were already aging, and 9/11 made them obsolete overnight,” Thomas Baldwin, director of program management in the port’s Engineering Services Bureau, stated in the port’s newsletter. “The study jointly commissioned by the port and the fire department confirmed we now had higher requirements for response times and capabilities to protect lives and property within the port complex.”