Her mother, Dr. Veena Law, a pediatrician who has worked with children with disabilities, didn’t want to think her own daughter may have a rare and fatal genetic condition.

“When it’s your child, it’s different,” said the physician. “There’s this desperation, this urgency to do anything.”

On May 14, the couple received a devastating diagnosis. It was GM1 gangliosidosis, an aggressive disease in which the body does not produce adequate enzymes to break down certain molecules. These molecules instead collect on the brain and spinal cord, resulting in widespread neurological degeneration that leads to an inability to walk, eat or speak. 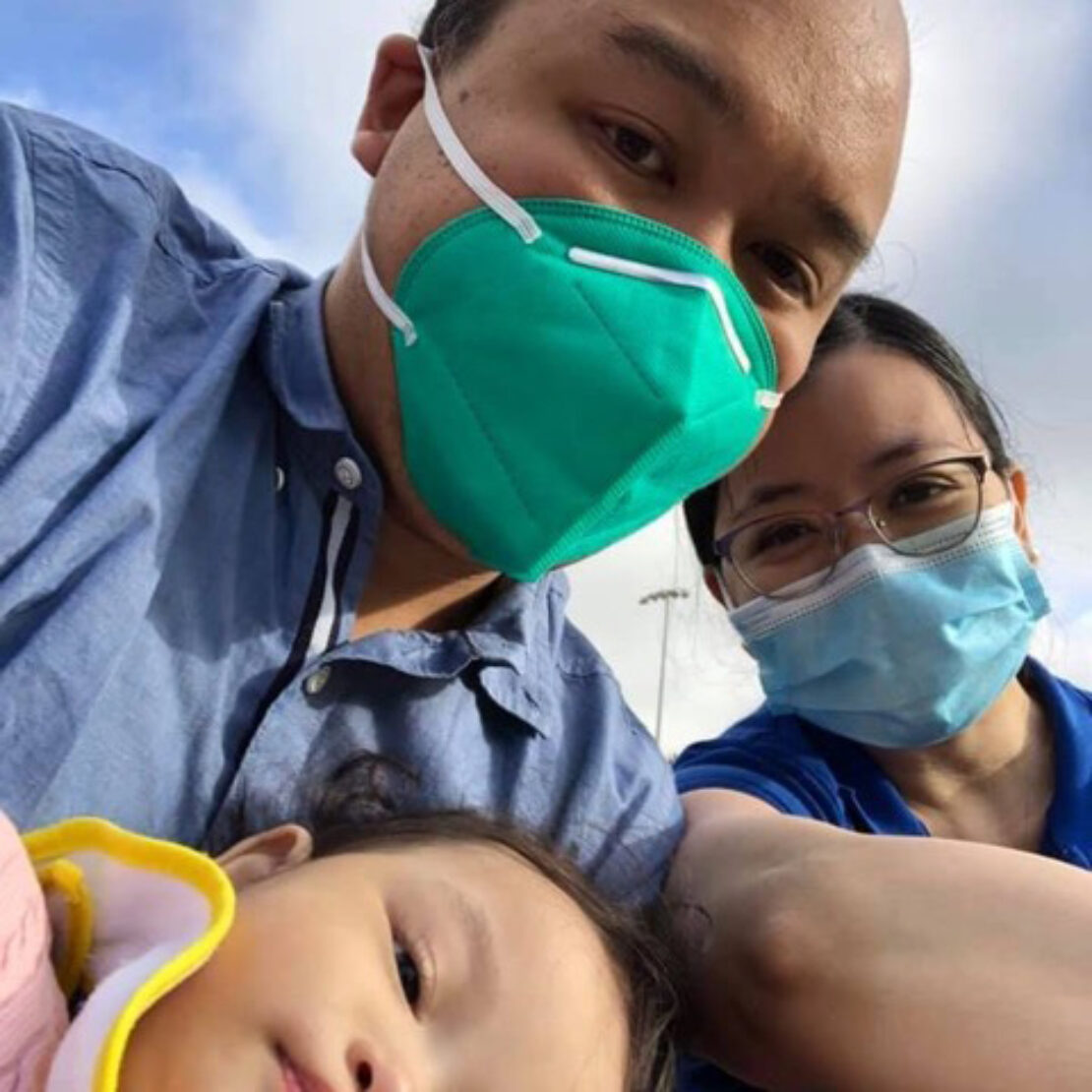 David and Veena Law smile with their daughter Violet, 2, who has been diagnosed with GM1 gangliosidosis. Photo courtesy of the Law family.

On Monday, the couple began a GoFundMe fundraiser in hopes of supporting research that may find a cure. In just five days they’ve raised more than $86,000, an astounding sum that will benefit the CureGM1 Foundation, the only nonprofit organization specifically dedicated to GM1’s research and drug development.

Founded in 2015, the organization provides patient advocacy while funding critical medical research and development for GM1, and in the last year, human clinical trials have demonstrated promising results.

“We’re really on the cusp of a really interesting medical revolution,” said Christine Waggoner, president and founder of CureGM1 Foundation, who started the organization with her husband Douglas Dooley following the diagnosis of their daughter, Iris.

“When my daughter was diagnosed, there was literally nothing,” Waggoner said. “The doctors say, ‘Go home, and basically love your child and they’re going to pass away,’ but now, at least we can say, well, there’s some clinical trials, you can talk to the doctors, maybe if you meet the criteria, you can have access to this kind of trial.”

The Laws are “cautiously hopeful” that Violet may be a candidate for some of these therapies in the future. 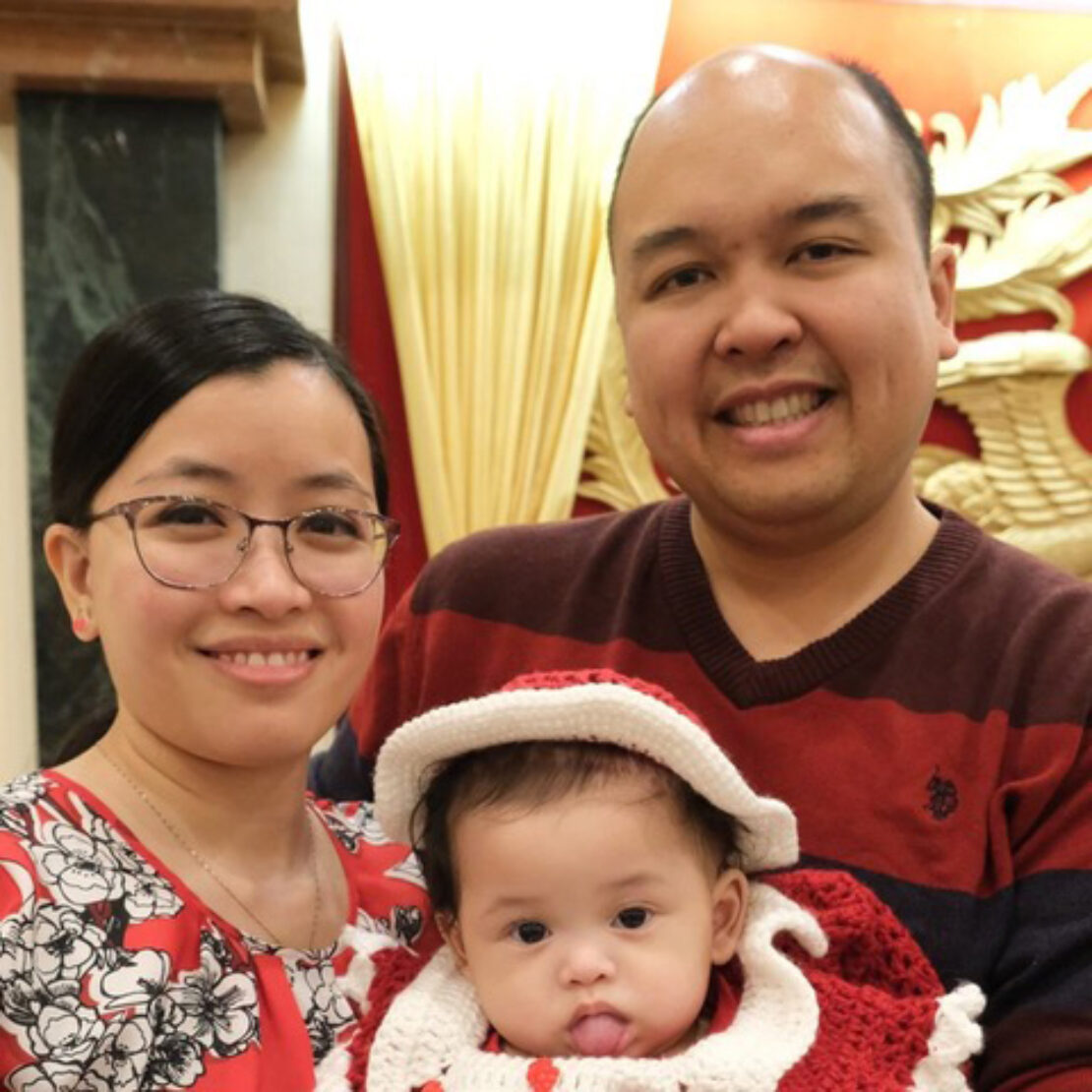 David and Veena Law smile with their daughter Violet, 2, who has been diagnosed with GM1 gangliosidosis. Photo courtesy of the Law family.

Violet’s parents first started noticing issues when their daughter was around 6 months old. The pregnancy had been normal; she was conceived through in vitro fertilization, which involved both parents undergoing genetic testing that did not indicate any likelihood of their child being born with a genetic disease.

“It’s the irony of all ironies,” said David Law, who cares for patients at St. Mary Medical Center and Long Beach Memorial.

Now she’s a toddler and her condition has progressed, but Violet’s parents can still see glimmers of her personality.

“She’s a sweet and happy child, she loves music, she loves her pureed foods …. she loves her stuffed toys, and she loves Disney,” said David Law, who hopes they can take a trip to Disneyland soon.

Even though she does not respond as most typical 2-year-olds do, the parents cherish moments when she is content being held, or kicks them when she wants something.

Considering how rare the condition is, the Laws said they have learned more from other families experiencing this than from most medical professionals.

“These families are so positive and have such a positive spin with everything,” David Law said. “They learn to live their lives valuing every day as much as they can.”

The Laws’ goal was to reach $25,000 in the GoFundMe by Friday, June 11—Violet’s birthday. They’ve more than tripled that amount, with donations coming from colleagues, coworkers, long-ago fraternity brothers and strangers.

“We blew through 50K in the first 24 hours, literally people we haven’t spoken to in 10 years were writing us these heartfelt letters, saying here’s $1,000,” said David Law.

The family now plans to continue raising funds through the end of the month.

Waggoner said the foundation is grateful for the support—and all the donors.

She hopes that newborn screening will become the standard in medical practice; currently a screening for only 100 diseases is recommended, and is not required by the government.

“That pales in comparison to the 7,000 rare diseases that exist,” she said.

The bulk of rare conditions, about 95%, do not have an FDA-approved drug treatment, according to the organization Global Genes.

Dr. Raymond Wang, a rare disease expert at the Children’s Hospital Orange County, said these clinical trials provide the first tangible benefit to parents. He has been at the hospital for nearly 14 years, and has treated around 10 children with GM1 gangliosidosis, including Violet.

“Previously, what was really difficult and heartbreaking, both as a physician and as a parent, I can put myself in those families shoes, after months and even years of knowing that something was going on with their child and finally getting a diagnosis, to have to tell a family there’s no treatment … that’s one of the most horrible things as a physician,” said Wang. “I went into medicine to help, and it’s so frustrating to tell a family there’s nothing we can do.”

He considered these trials an important first step, with evidence indicating they can help halt or slow down the disease’s progression.

Wang encouraged parents to trust their “sixth sense,” and persist with getting their child medical attention if they suspect something is wrong.

And for parents who may be experiencing something like this, Veena Law recommends taking it a day at a time.

“You never know what’s going to come,” she said. “If you focus on the negatives, it will consume you, I feel. Look at all the positives and enjoy your child as much as you can.”

David Law said that amid all of this, having one or two years of life with their daughter is worth it.

“In the face of a terminal disease you can still find hope and salvation and real value in the life you have,” he said. “It’s been a terrible gift, but a really important one that we’ve just really come to terms with.”