Long Beach’s Public Works Department is investigating who within the city approved an illegal tree trimming project along the Peninsula on Wednesday that residents say disrupted great blue heron nests during breeding season and killed at least one fledgling.

Peninsula residents said they were shocked on Wednesday morning when they saw workers from West Coast Arborists trimming the 70-foot-tall palm trees in the median along Ocean Boulevard, which has become a popular spot for protected great blue herons to raise their fledglings in May.

Resident Kellie Canning, who lives near 66th Place, said she approached a supervisor and pointed to a large nest in one of the trees.

“I said, ‘Excuse me can’t you see that there’s a nest up there?'” she said. “He told me they were avoiding nests, but I had a bad feeling. I didn’t know it was illegal; I just knew immediately that this was not good.”

Canning ran down the street to check for nests in trees that had already been trimmed. She said it was hard to tell if nests had been destroyed because much of the debris had already been cleaned up.

She said she was furious to see the tree trimmers were still cutting. A city employee did come out to stop the trimming, she said, but crews later started trimming again closer to Belmont Shore.

“They cut every tree along the median,” she said. “They wouldn’t stop. They were moving like a military operation.”

Canning called her neighbor, Tim Rue, a local photojournalist, who immediately called the city. Rue and his family then rushed out to help Canning look for more nests. It was then that they found a dead fledgling in the street.

Canning said it was from the same tree that she had originally pointed out to the supervisor.

“I was so upset,” she said. “These guys were ignoring me from the start.”

Great blue herons are protected by the federal Migratory Bird Treaty Act, which prohibits the killing of any migratory birds except as permitted by the U.S. Fish and Wildlife Service. The California Coastal Commission also has provisions against tree trimming near nesting birds. 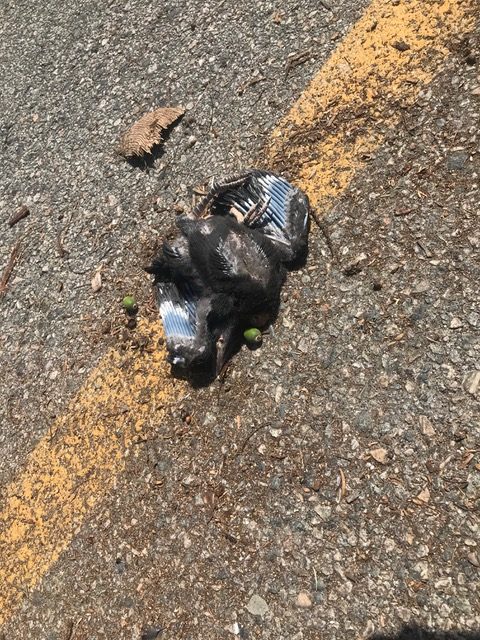 A dead Blue heron fledgling lies on the ground after illegal tree trimming on the Peninsula Wednesday. Photo by Rachel Rue.

Long Beach Public Works Director Craig Beck on Wednesday said the city is investigating the incident and working to determine how and why the project was approved.

Beck said the incident was in violation of the city’s permit under the California Coastal Commission, which only allows tree trimming from October to December to avoid disrupting nesting birds.

“We’re still trying to get all the facts and understand what happened,” he said.

Beck said the city has been in contact with West Coast Arborists and will provide a full report on the incident. He said the city should have more information next week.

Violations under the California Coastal Act, which protects coastal habitats, can result in fines of up to $30,000.

Noaki Schwartz, a spokesperson for the California Coastal Commission, said the commission’s enforcement unit is investigating the incident.

Andy Trotter, vice president for West Coast Arborists, said the company also is working to figure out what went wrong and is reviewing wildlife protection standards for all of its workers.

“We’re very concerned about what happen and we fully intend to take corrective action,” he said.

Peninsula residents said they’re baffled as to how the city could have approved a major tree trimming project during peak breeding season.

“It’s a critical time for these birds because the parents are working hard to provide food for their little fledglings,” Rue said.

On a positive note, Rue said residents were able to save many nests, as the city was planning to have crews come back on Thursday to trim trees on the side streets. Rue sad he and his family counted at least 13 nests in those trees.

Rue said the large birds, which mate for life and often return to the same nest each year, have become a beloved part of the neighborhood.

“If they have a successful nest then they often return, so if we lost all those nests it could have been catastrophic,” he said. “They would have left and possibly never returned to the Peninsula.”