When the rapper Cuuhraig took a trip to the Yardhouse late last year, he did what he often does: stepped away from the crowds at Shoreline Village and had a peaceful moment by himself on the sand, looking out at the water. It had been a historic year for the groundbreaking Polynesian rapper, and he took a moment to reflect on his accomplishments.

The joy and pride he felt in that moment are lacquered on thick over every second of his latest album, “Forever Him,” which came out on New Year’s Eve.

“It’s an album that I really wanted to put out to just express to people, something to reflect on the year that I had,” he said in a recent interview. “It was a great year for me.” 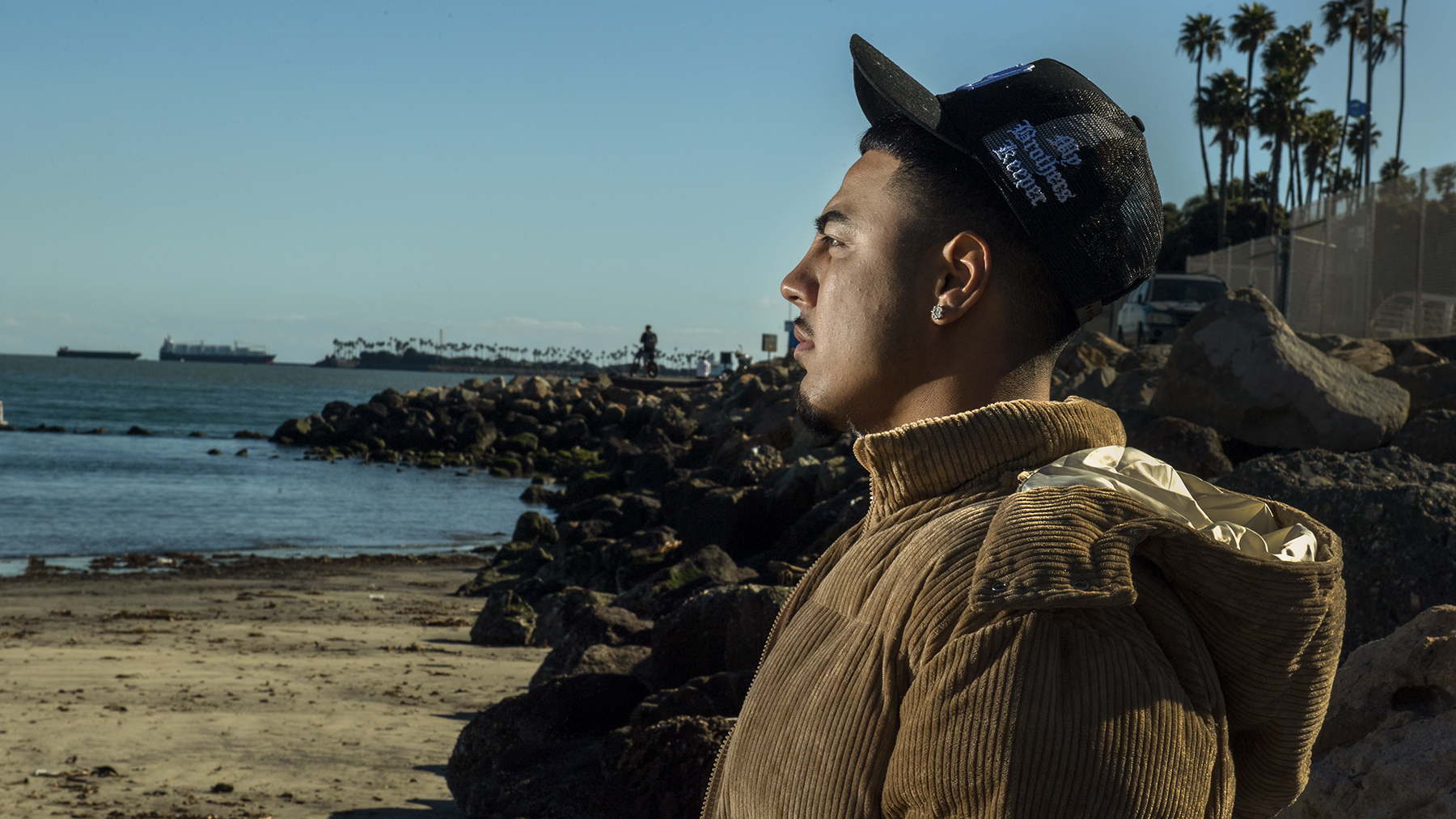 Rapper Cuuhraig looks out to the ocean as he spends some time at Alamitos Beach in Long Beach Tuesday, Jan. 17, 2023. Photo by Thomas R. Cordova.

There’s no doubt about that, or that 2023 is shaping up to be an even bigger one. Last year Cuuhraig became the first Polynesian rapper to be booked at Rolling Loud, the seminal rap music festival, where he’ll do a show this March. He sold out House of Blues twice, and he went overseas to co-headline a tour in New Zealand and Australia, where his eyes were opened at how widely his music was being played among fellow islanders.

“It’s crazy, we’re on the other side of the world,” he said. “To see people buying your merch and singing your songs word for word—you don’t realize how much people appreciate what you do. It was a very humbling experience.”

One of his favorite moments of the year didn’t see him standing on a stage, though, but on a football field. Cuuhraig (née Craig Tafua) was raised in West Compton but like many in the Samoan community, spent plenty of time in Long Beach, Lakewood and other surrounding cities, including playing football at Lakewood High for two years.

Because of that history and a connection with Lakewood football coach Justin Utupo, who is also Samoan, Cuuhraig was asked to come perform at Lakewood’s CIF-SS football championship game, where he rapped pregame as fog encircled him, helping to bring out the Lancers and get them hyped up for their first-ever championship game on campus.

“I was honored that they asked me to be a part of that moment,” he said. “I’ve known Justin and his brother Jared for a long time—that’s how it is in our community, everyone knows and supports each other, we all grew up in each other’s churches and backyards. My little brother and my little cousins and family still play at Poly and Lakewood and I’m always tapped in with them.”

Cuuhraig transferred from Lakewood to Dominguez and was a successful football player, with scholarship offers out of high school—but music was calling his name. As he’s had increasingly more success over the last couple of years, he’s also had the support of his community behind him. While Polynesians have always been involved in the music industry, there haven’t been a ton of highly-visible Polynesian rappers. Cuuhraig said he’s proud to be part of a changing movement among his people.

“Polynesians are stepping into the spotlight, that’s the message I’ve been putting out,” he said. “It used to be if you saw Polys on the football field we were linemen, or if you saw us at a concert we were security guards. We’re trying to change the narrative that there’s other lanes for our people—we can be quarterbacks, we can rap. The Rock is one of the highest paid actors in Hollywood and he’s half Samoan. It’s only a matter of time before you see more and more of us in the spotlight.”

He also said that the support he’s had behind that message has been a big part of his motivation to not settle for the success he’s already had.

“I’m just grateful that people broke down doors for us and to try and do that for the next generation,” he said. “Never be satisfied, never get comfortable. There’s too many people behind us wanting us to do good—people want to see us win. And once other people see the support it makes them want to hop on.”

If that sounds fun … well, it is. That’s where the infectious joy of “Forever Him” comes from. The 13-song album opens with the song “Thank You,” a heartfelt message of gratitude to his family and fans.

“I’ll tell you about my highs but ain’t ashamed of all my lows,” he raps on “True Story, Pt. 2,” then cracks “I’m finally getting major I got fans in Ohio.”

The breakout songs of the project have been “4th Shot” and “Jupiter Love,” both of which are energetic love songs. The album’s closing song, the eponymous “Forever Him,” makes it clear that while 2022 was a great year for Cuuhraig, 2023 promises to be a better one. “Diamond chain wearing, everybody staring, I’ll be a GRAMMY award-winner,” he raps to close the song.

He’ll have more music on the way this year along with the historic Rolling Loud appearance in March, plus a tour announcement coming soon. He’s also starting to get booked for more sporting events, and will perform at halftime of UNLV’s Homecoming game.

“A lot of times in my life I dealt with self doubt, and now I’m seeing what happens when I put the work in,” he said. “I’m going to keep going.” 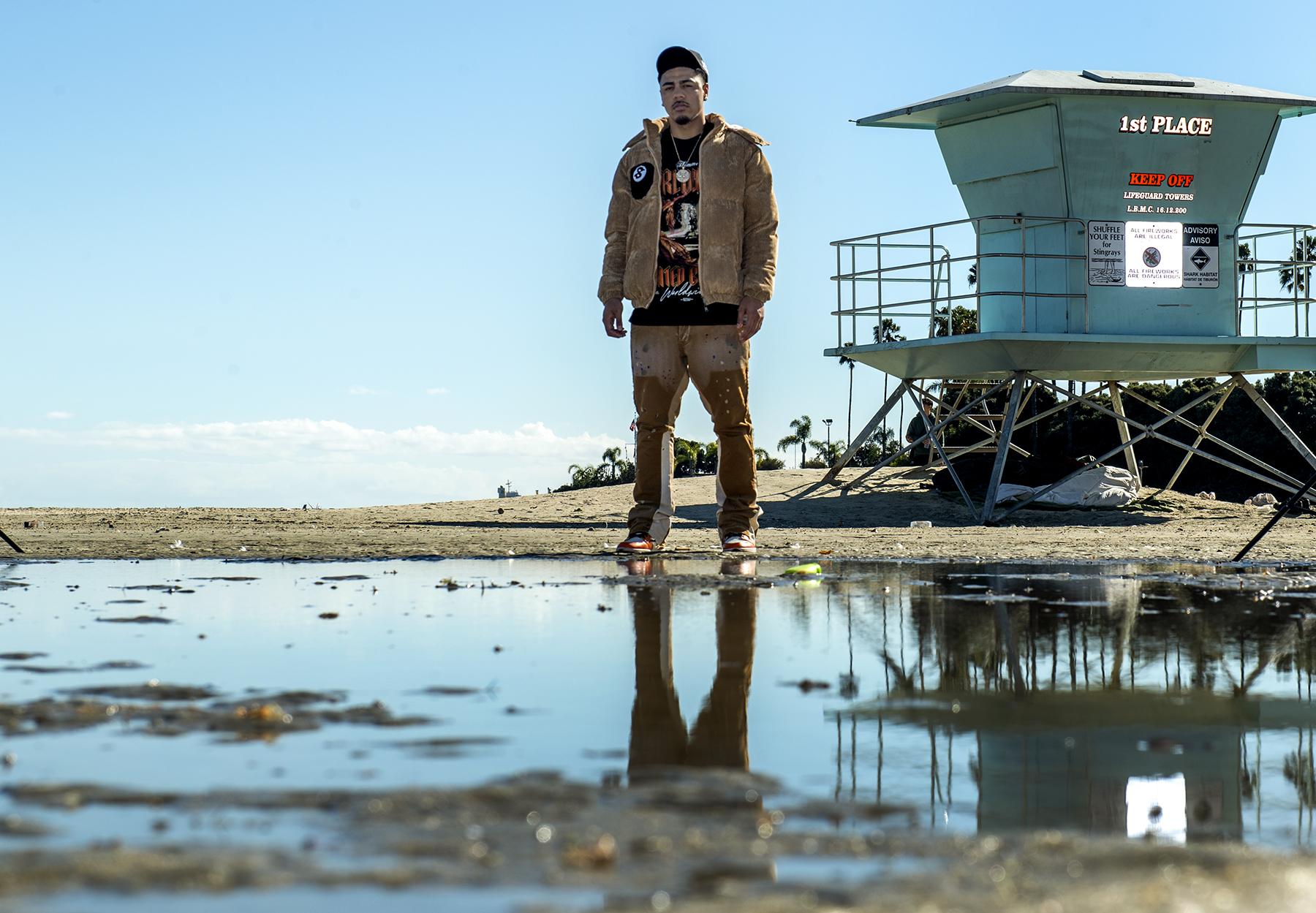