Hundreds line up as Long Beach makes COVID-19 vaccine available to anyone 50 and over • Long Beach Post News
- ADVERTISEMENT -
Help us light up the city; Add your home to the 2022 Holiday Lights map. CLICK HERE

Long Beach resident Bill “Wild Bill” Lanham has been eager to get his COVID-19 vaccine shot.

His wife, a secretary for the Port of Long Beach, was able to get her shot as a city employee, but Lanham, a 60-year-old retired driver for Long Beach Yellow Cab, chose to wait his turn.

On Friday, Lanham was one of hundreds of people lined up to get a COVID vaccine at the Long Beach Convention Center as the city became one of the state’s first jurisdictions to make shots available to anyone age 50 and over.

Gov. Gavin Newsom on Thursday announced that the state will open eligibility for the COVID-19 vaccine for anyone in that age group starting April 1, but Long Beach, which has consistently moved ahead of other cities, opened on Friday with about 500 walk-in slots available between 11 a.m. and 2 p.m.

As of Friday afternoon, the lines snaked around the Terrace Theater courtyard as newly eligible residents and people who work in Long Beach waited patiently. 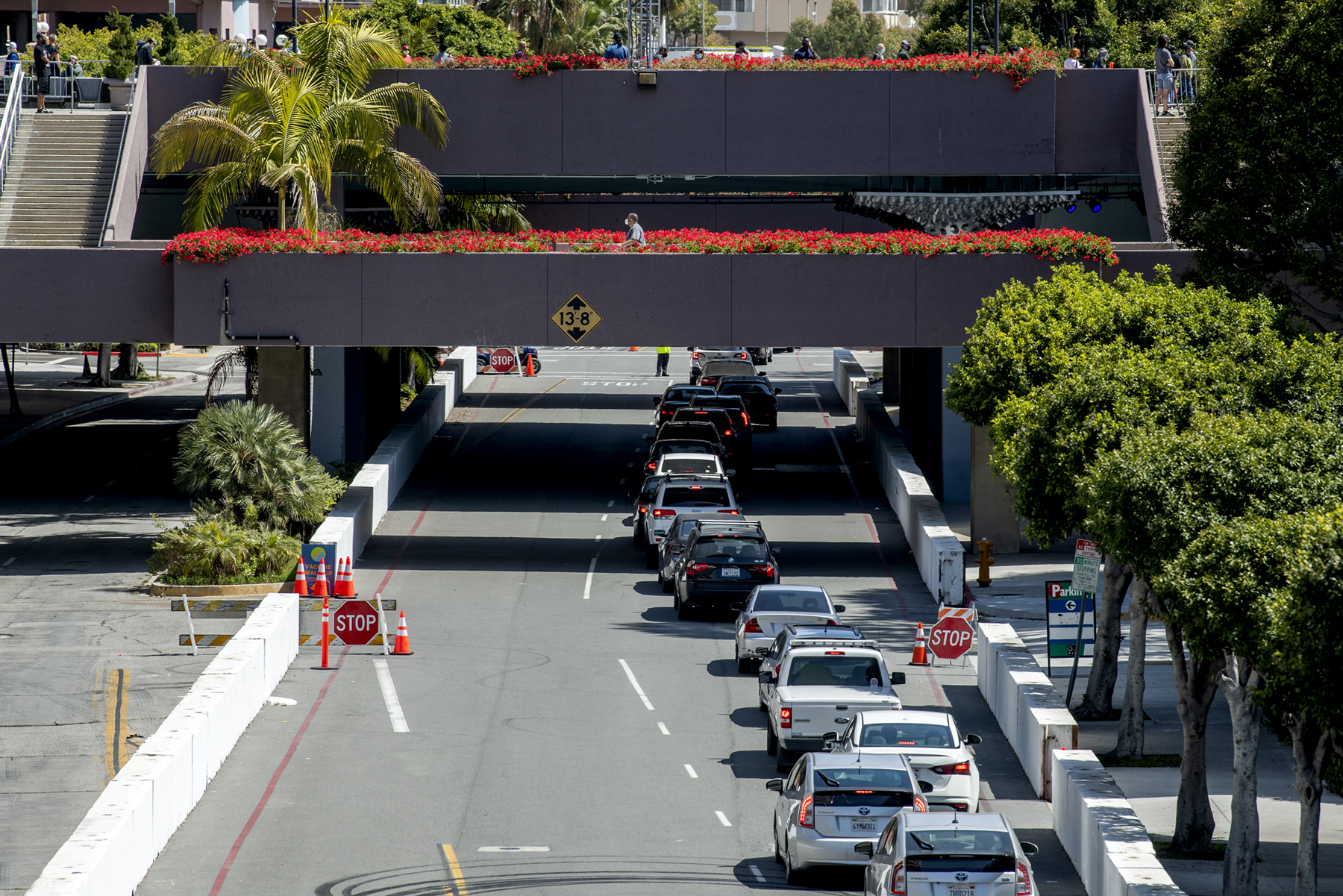 Drive-up, below, and walk-up, above, vaccine lines at the Long Beach Convention Center and Terrace Theater courtyard in Long Beach Friday, March 26, 2021. Anyone 50 or over who lives or works in Long Beach is now eligible to get vaccinated. Photo by Thomas R. Cordova. 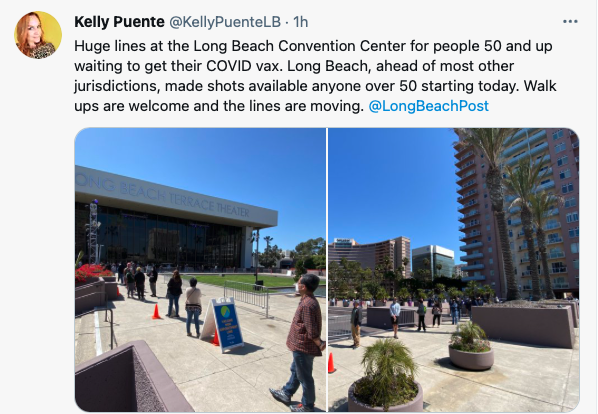 The state on April 15 will make the shot available to anyone over 16. Long Beach health officials have not said whether the city will move faster.

The effort comes as California and Los Angeles County continue to see promising declines in case rates, hospitalizations and other indicators.

As of Thursday, California’s seven-day case rate per 100,000 people was among the nation’s lowest, at 46.8, according to the CDC.

While numbers overall are on the decline, Long Beach this week saw slight uptick in case rates and the rate of those testing positive.

Hospitalizations have continued to decline, with 102 hospitalized residents, down from 119.

“The number of people tested in Long Beach has increased almost 4-5 fold in the past week, and as a result we have found a slightly higher number of positives than we would normally, although numbers still remain very low,” she wrote in an email. “We expect the numbers to decrease again over the next week.”

The positivity rate remains significantly lower than in January and February when it spiked to nearly 20%, however, health officials warn of a possible increase due to variants of the virus.

Los Angeles County Public Health Director Barbara Ferrer this week said California should be concerned with recent increases in some states like New York and Florida.

A woman waits in a long line at the Terrace Theater courtyard in Long Beach Friday, March 26, 2021. Anyone 50 or over who lives or works in Long Beach is now eligible to get vaccinated. Photo by Thomas R. Cordova.

Ferrer on Wednesday warned that more-infectious COVID-19 variants are becoming more prevalent in the county, most notably a California-grown variant and another first identified in the United Kingdom. Long Beach this week reported its first cases of the UK variant.

The spread of those variants, which can be more easily passed from person to person, has raised concerns about a possible reversal of the downward trend in infections—at a time when the county is poised to advance further in the state’s economic-reopening blueprint.

But barring any major new surge in COVID case numbers, the county is still on track to enter the less-restrictive orange tier of the state’s Blueprint for a Safer Economy by the first week in April, likely in the days following Easter Sunday. Once that happens, it will be up to the county to decide whether to fully adhere to the state’s orange-tier guidelines for businesses that would be allowed to open or expand capacity.

Those wishing to get a COVID-19 vaccine in Long Beach can register using the state’s My Turn system. If you’re 50 or over and didn’t previously sign up through VaxLB, you can email [email protected] or call 562-570-4636. 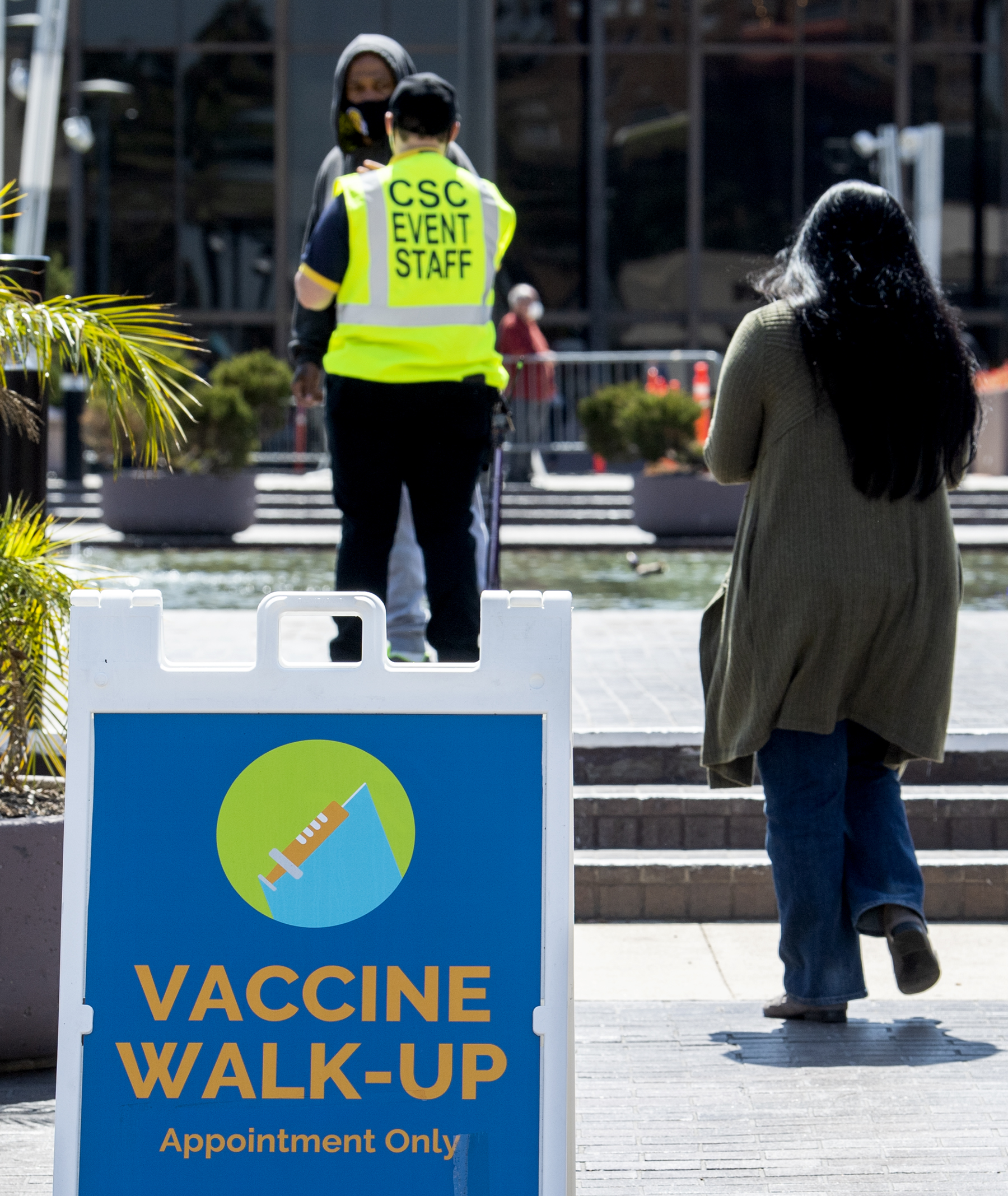 Vaccine signs are placed at the entrance of the Terrace Theater courtyard in Long Beach Friday, March 26, 2021. Anyone 50 or over who lives or works in Long Beach is now eligible to get vaccinated. Photo by Thomas R. Cordova.