City warns public to stay away from coast as storm approaches • Long Beach Post News
- ADVERTISEMENT -
Help us light up the city; Add your home to the 2022 Holiday Lights map. CLICK HERE

Long Beach maintenance crews have been working to shore up the coastal areas as the remnants of a hurricane in Baja California move into the area, threatening to flood low-lying areas.

Bulldozers and front loaders raced to defend properties along the Peninsula late Thursday night as the waters obliterated the sand berms that normally protect homes, and crews Friday morning were still rebuilding the sand berms along the coast from Rosie’s Dog Beach to the end of the Peninsula. Berms were also being fortified in the Alamitos Beach area between Fifth and Ninth places.

City officials advised residents to stay away from the coast from 7 p.m. Friday to 7 a.m. Saturday. Though no evacuations were ordered, “residents in vulnerable areas, especially those that are prone to flooding, should remain vigilant and be prepared in the event of evacuation,” the city said.

Emergency crews set up a command post in the parking lot at Clarement Avenue and Ocean Boulevard, and closed vehicle access to the Peninsula at Ocean and Bayshore Friday evening.

So far no property damage had been reported to authorities, but water swamped portions of Alamitos Beach where, hours earlier on Thursday, crowds had been gathered for the NFL’s kickoff party.

A one-man crew attempts to move water and sludge away from the NFL kickoff party site a day after the event at Alamitos Beach before another high tide and rain are expected to bring flooding to Long Beach on Friday, Sept. 9, 2022. Photo by Thomas R. Cordova.

Patty Hollis, who lives on the Peninsula between 64th and 65th places along Ocean Boulevard, came home Thursday night around 8:30 p.m. to find water and mud in her front and back yards. The siding of a fence that guards the front porch had been ripped open and debris was strewn on the boardwalk in front of her house. 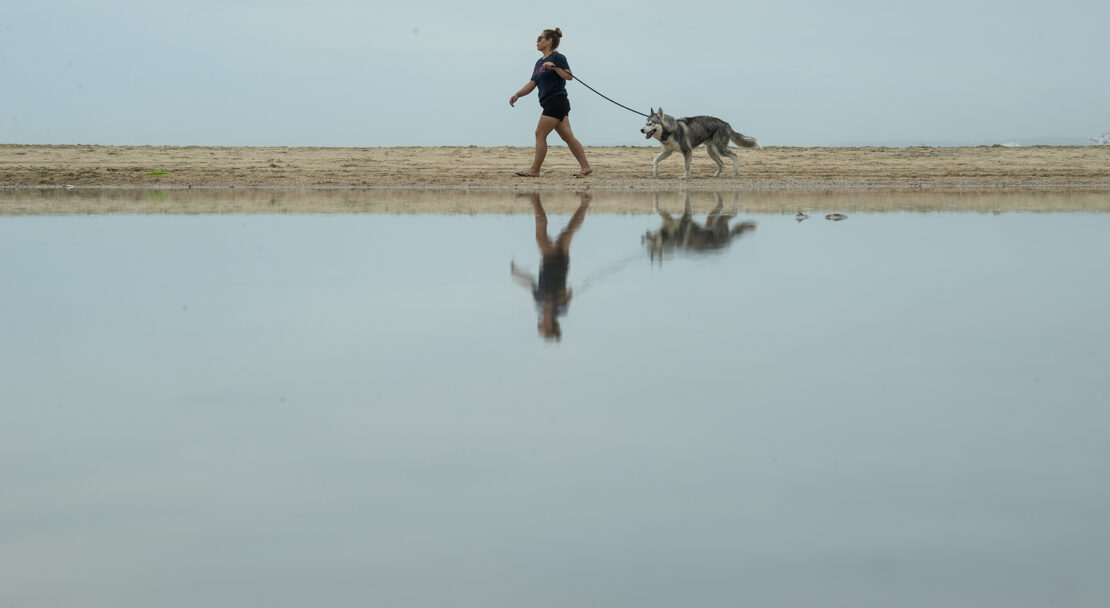 Angelica Escamilla walks her dog Juki past a pool of water on the beach after a high tide at Rosie’s Dog Beach on Friday, September 9, 2022. Photo by Thomas R. Cordova.

Several neighbors had sandbags in front of their doorways to protect against the tide. Pools of water still clung to the area where the berms are normally piled high.

Meanwhile, water made it to Ocean Boulevard from Claremont Avenue to the beginning of the Peninsula, with mud still caked in the street Friday morning. 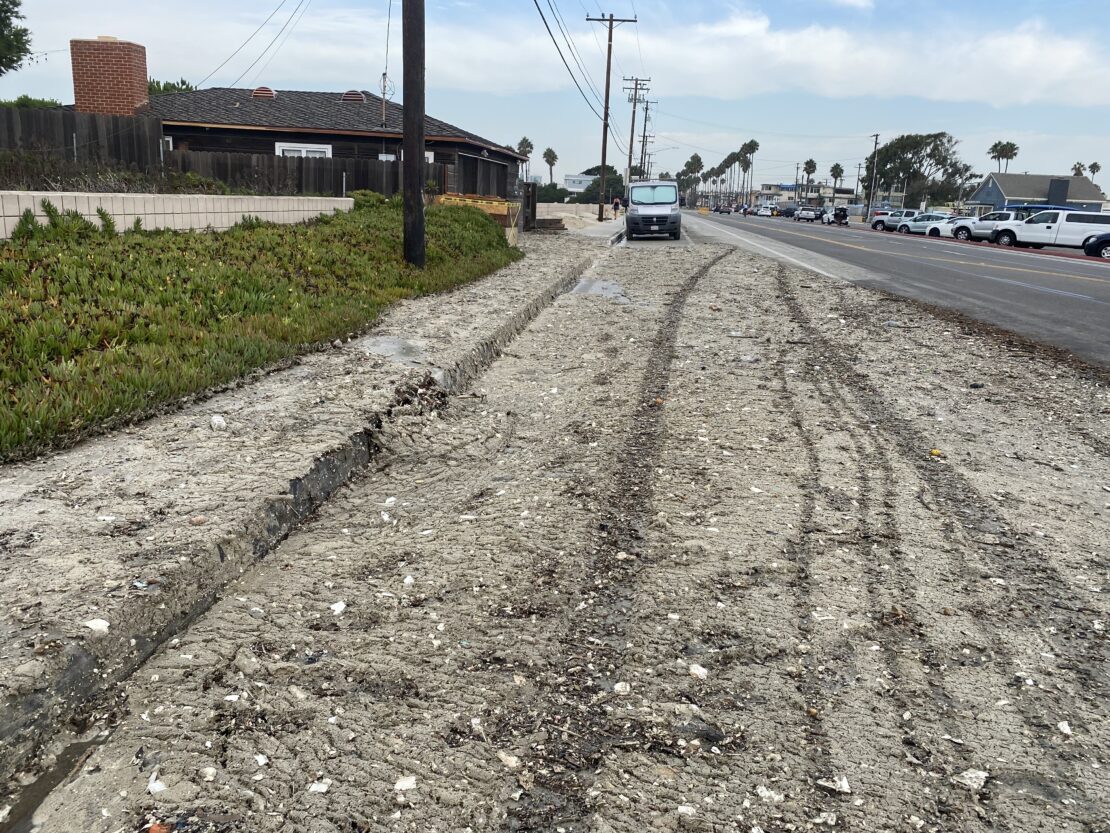 Mud remained in the street after water flowed onto Ocean Boulevard near the start of the Peninsula Friday morning. Photo by Melissa Evans.

The National Weather Service is forecasting rain from the remnants of Hurricane Kay to begin this afternoon around noon, with 100% chance of rain into Saturday. Thunderstorms are also possible throughout the weekend.

The NWS issued a flood watch that will be in effect through Saturday night in the Los Angeles County Mountains and Antelope Valley.

Kay had been categorized as a hurricane, but it weakened as it made landfall Thursday night, then began shifting to the northwest over the ocean. But Kay was still packing a punch, promising to bring widespread rain across the region.

The worst risk for the Peninsula may come tonight when the rain could combine with high tides that are expected to hit around 9:20 p.m. Large flood lights and emergency vehicles dotted the sand Friday evening. 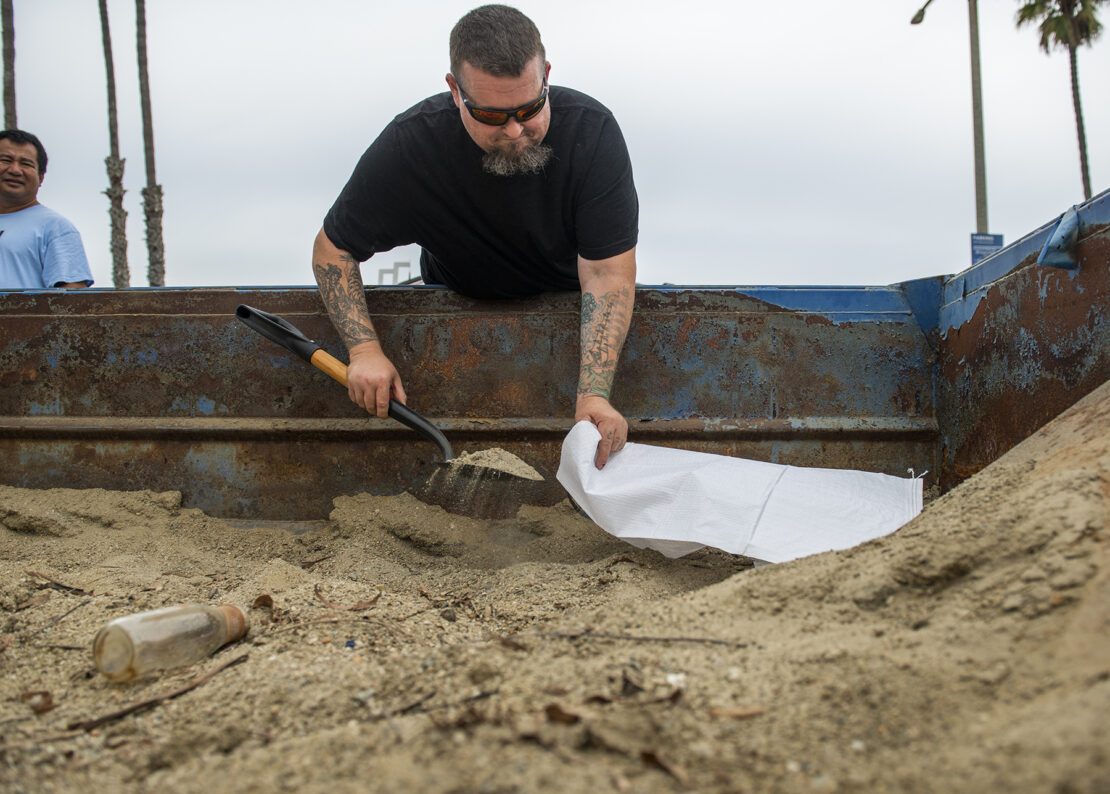 Chris Mayer fills a bag of sand as he prepares for tonight’s high tide. Photo by Thomas R. Cordova.

The cloud cover from the storm was also helping to trap warm air in the region, meaning continued hot weather on Friday, despite some overcast conditions, along with increased humidity. Excessive heat warnings will remain in effect for most of the Southland until 8 p.m. Friday. Then the rain will move in.

Temperatures remain hot and muggy Friday, with highs in the mid-90s expected. Temperatures will cool slightly this week, into the low-80s, as the cooler Pacific storm makes its way into the region.