'It's going to be a fun thing for the summer': New floatable playground is a splash with beachgoers • Long Beach Post News
- ADVERTISEMENT -

Dozens of people of all ages gathered in line Saturday afternoon for their turn at the new, and much-anticipated, floating playground at Alamitos Beach.

“It’s more slippery than I thought it would be,” said 44-year-old San Pedro resident Will Funk, who brought his children to the opening of the Wibit at Alamitos Beach after hearing about it on social media. “It’s going to be a fun thing for the summer. I’m sure we’ll be out there more.”

The Wibit is now officially open to the public for the summer. pic.twitter.com/rXvYnraUGM

Funk and his children were one of the first 30 people who got to experience the Wibit following an opening ceremony that included speeches from city officials, including Councilmember Rex Richardson, who attended the event with his family for a beach day.

“There’s no other city that does this,” Richardson said. “When people think of summertime in the LBC, they’re going to think of the Wibit.” 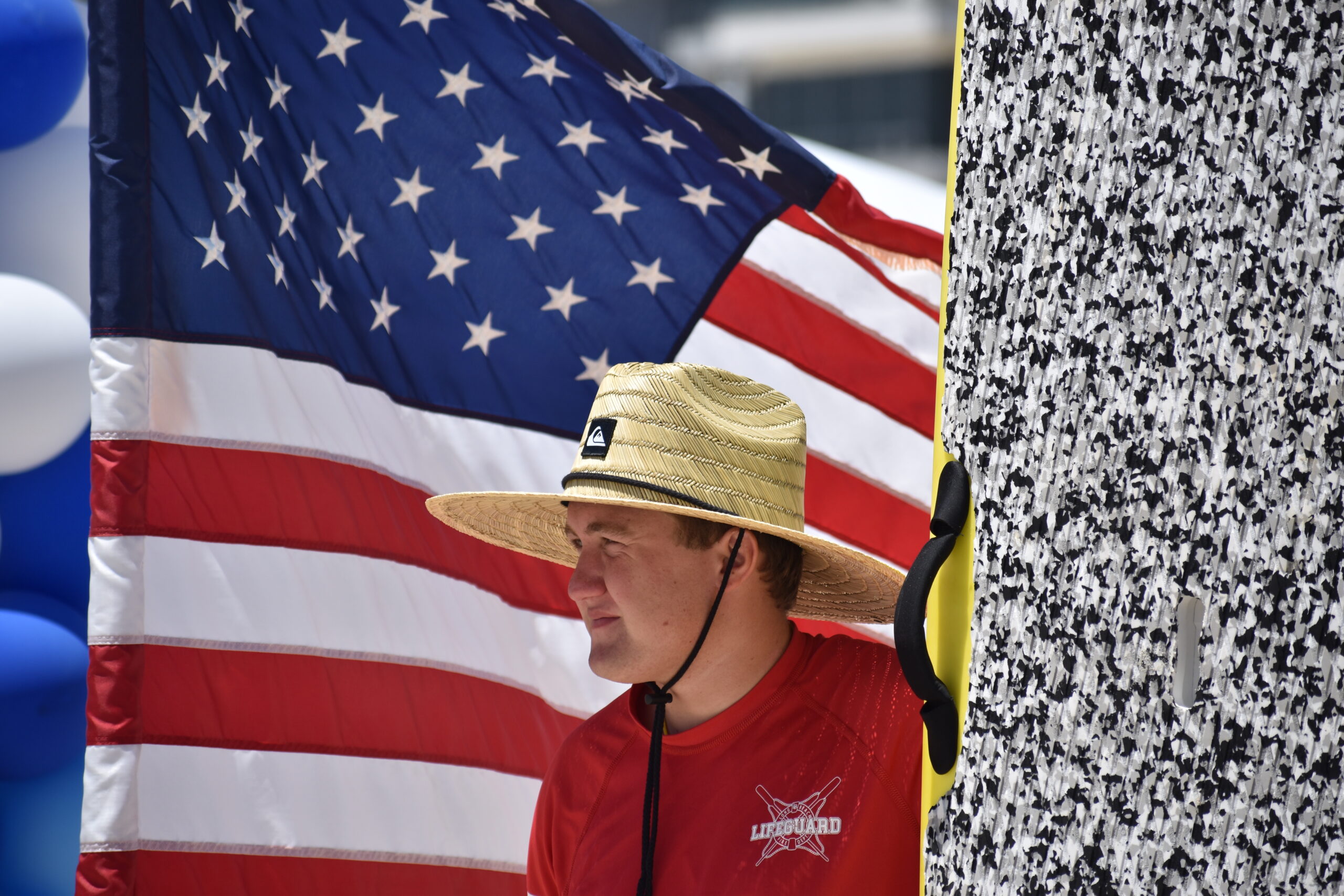 A lifeguard holding a surfboard stands in front of the American Flag just before the opening celebration of the new Wibit at Alamitos Beach, Saturday, June 25, 2022. Photo by Fernando Haro.

The new structure, located at Fifth Place and Ocean Boulevard, cost $400,000, which came from the Tidelands fund that consists mostly of oil revenue and must be used along the coastline.

The water where the Wibit is located is about 12 feet deep. Before using the playground, children and adults must pass a swim test to ensure they are strong enough to get to the structure and back ashore, officials said. Only 30 people are allowed on the Wibit at a time. Each child must also be accompanied by an adult.

Once atop the playground, swimmers are free to get creative using the springboard, bouncer, monkey bars and several other features. 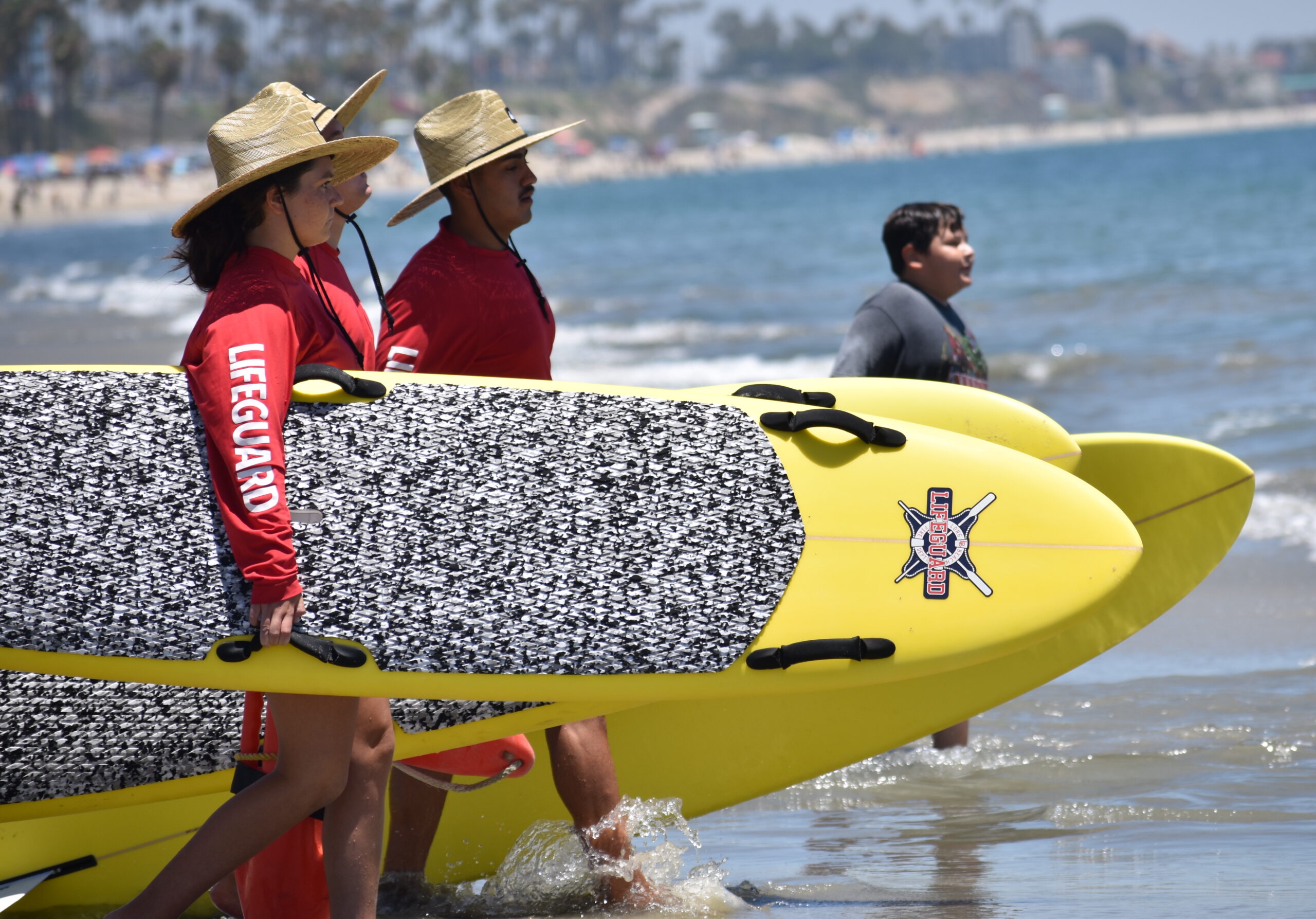 A group of lifeguards make their way into the ocean following the opening celebration of the new Wibit at Alamitos Beach Saturday, June 25, 2022. Photo by Fernando Haro. 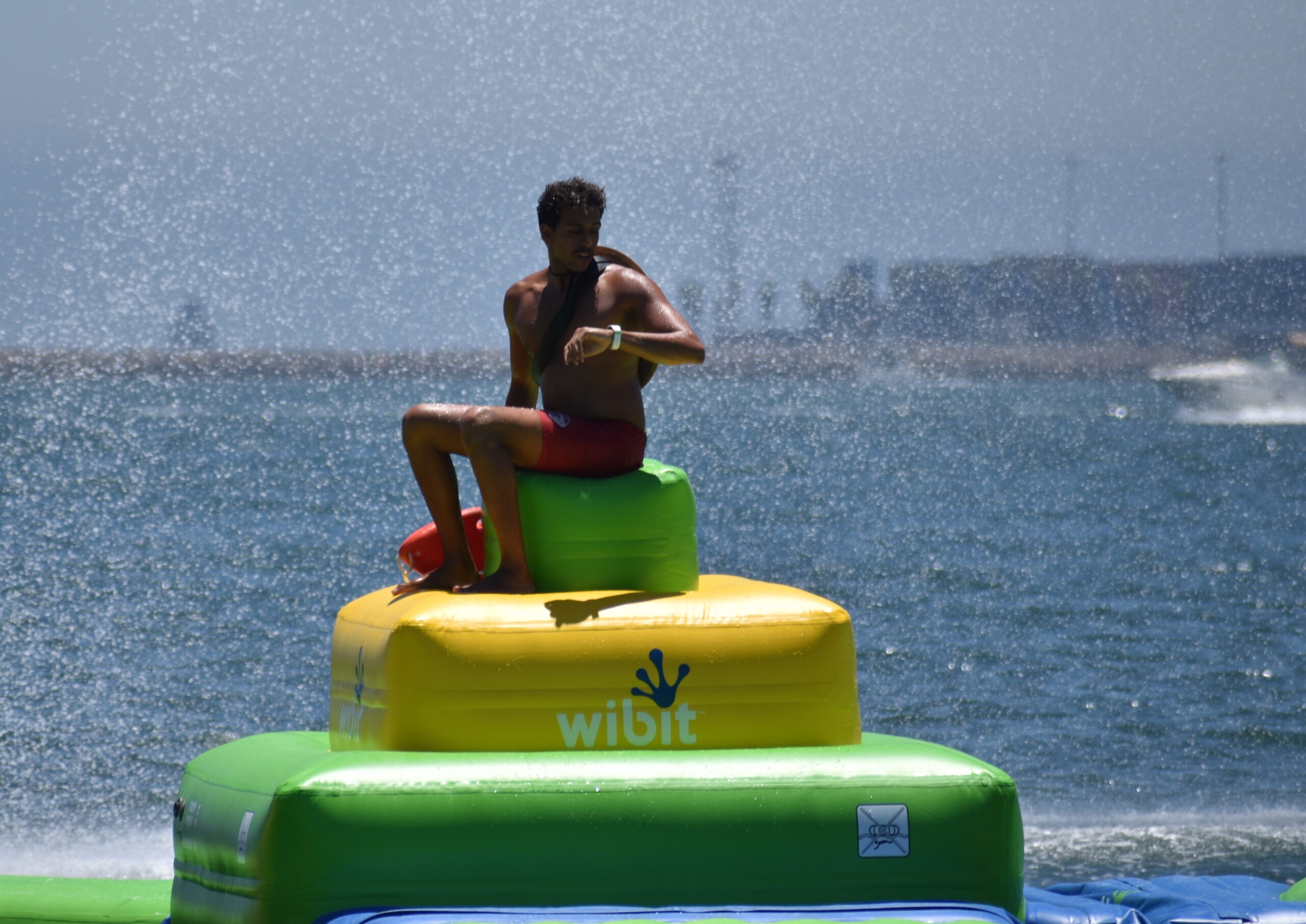 Water from a lifeguard boat sprays into a lifeguard sitting on the new Wibit structure at Alamitos Bay Saturday, June 25, 2022. Photo by Fernando Haro. 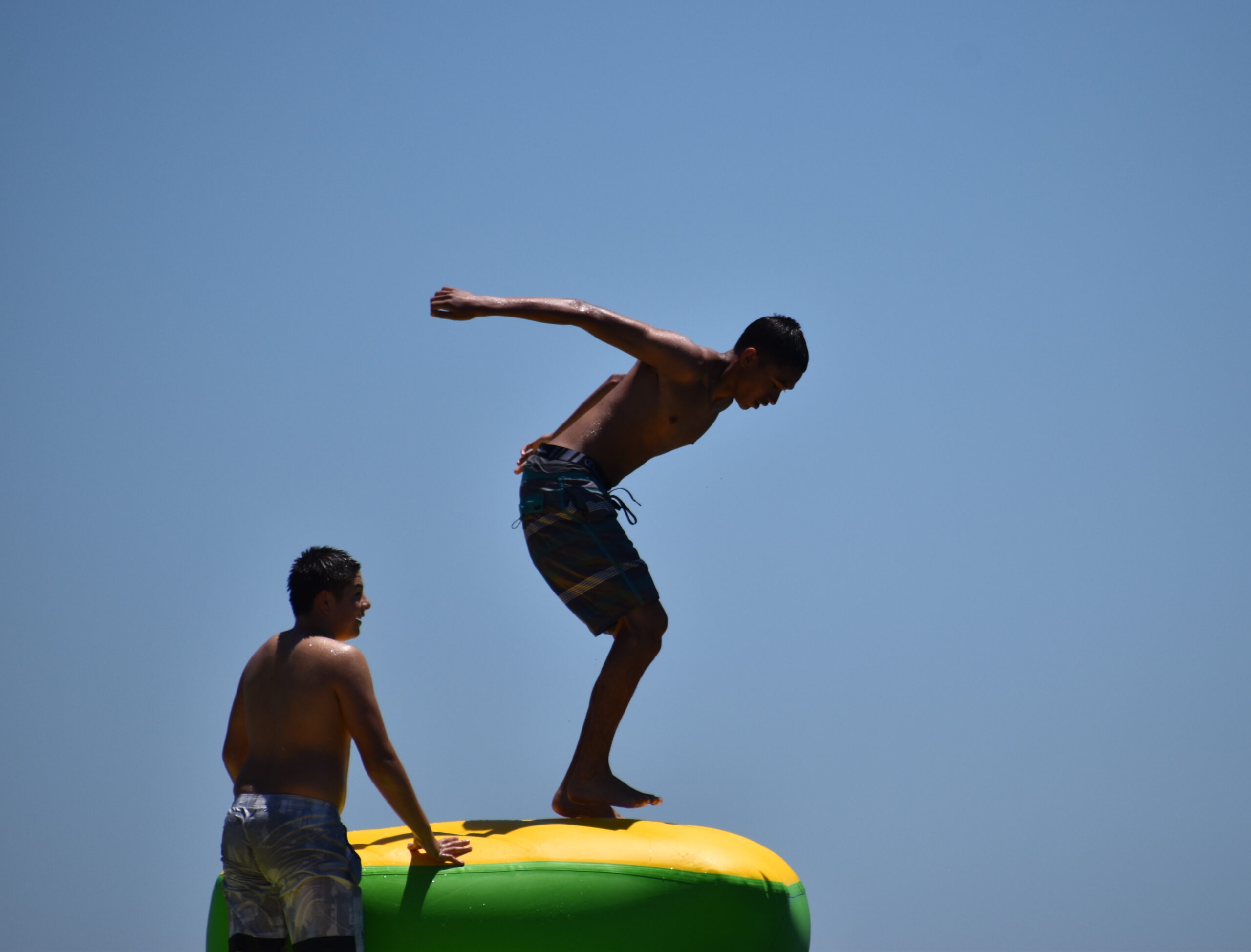 A boy gets ready to jump from the highest point of the Wibit into the ocean Saturday, June 25, 2022. Photo by Fernando Haro. 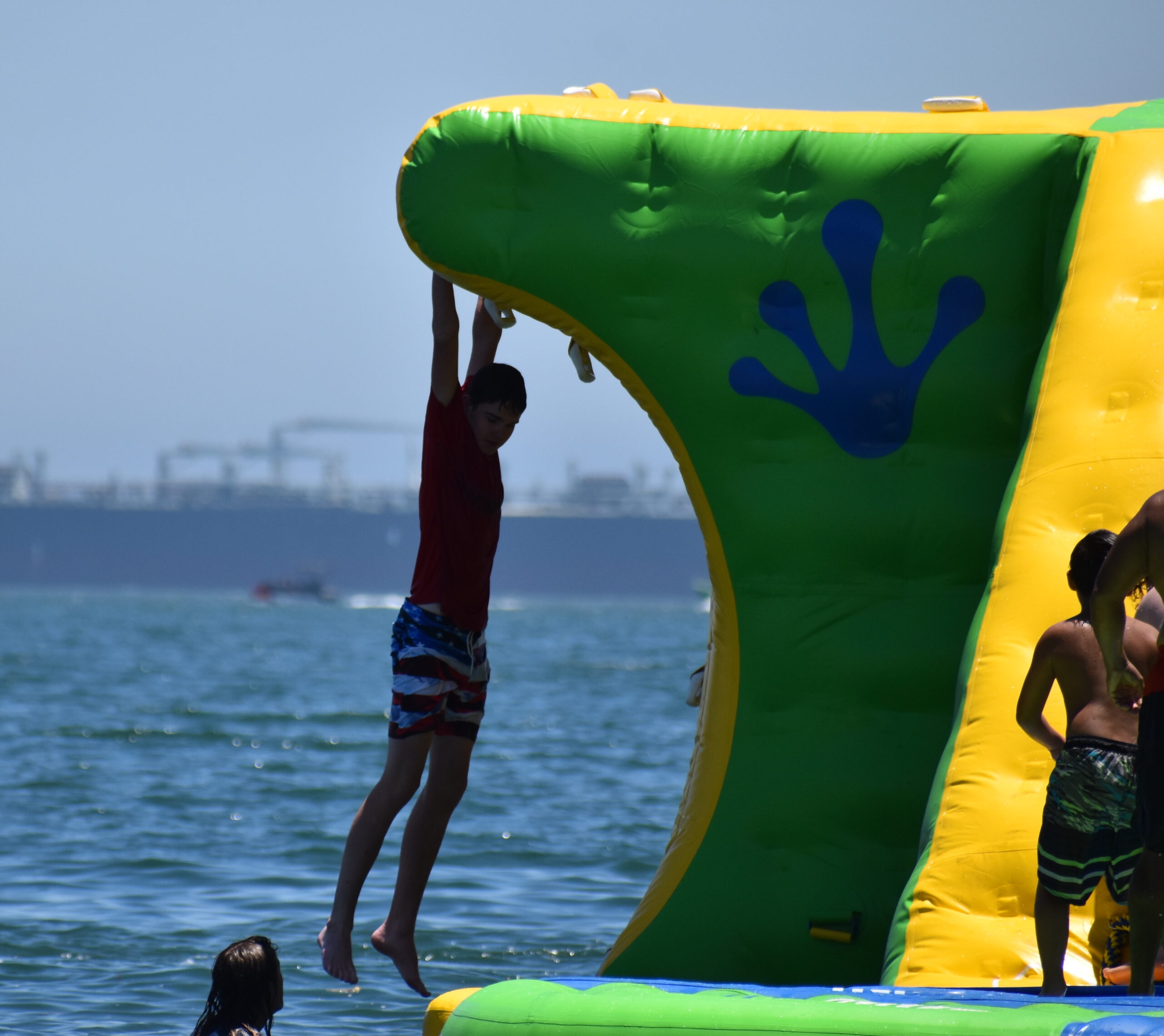 A swimmer hangs onto the ledge of the Wibit before falling into the ocean Saturday, June 25, 2022. Photo by Fernando Haro. 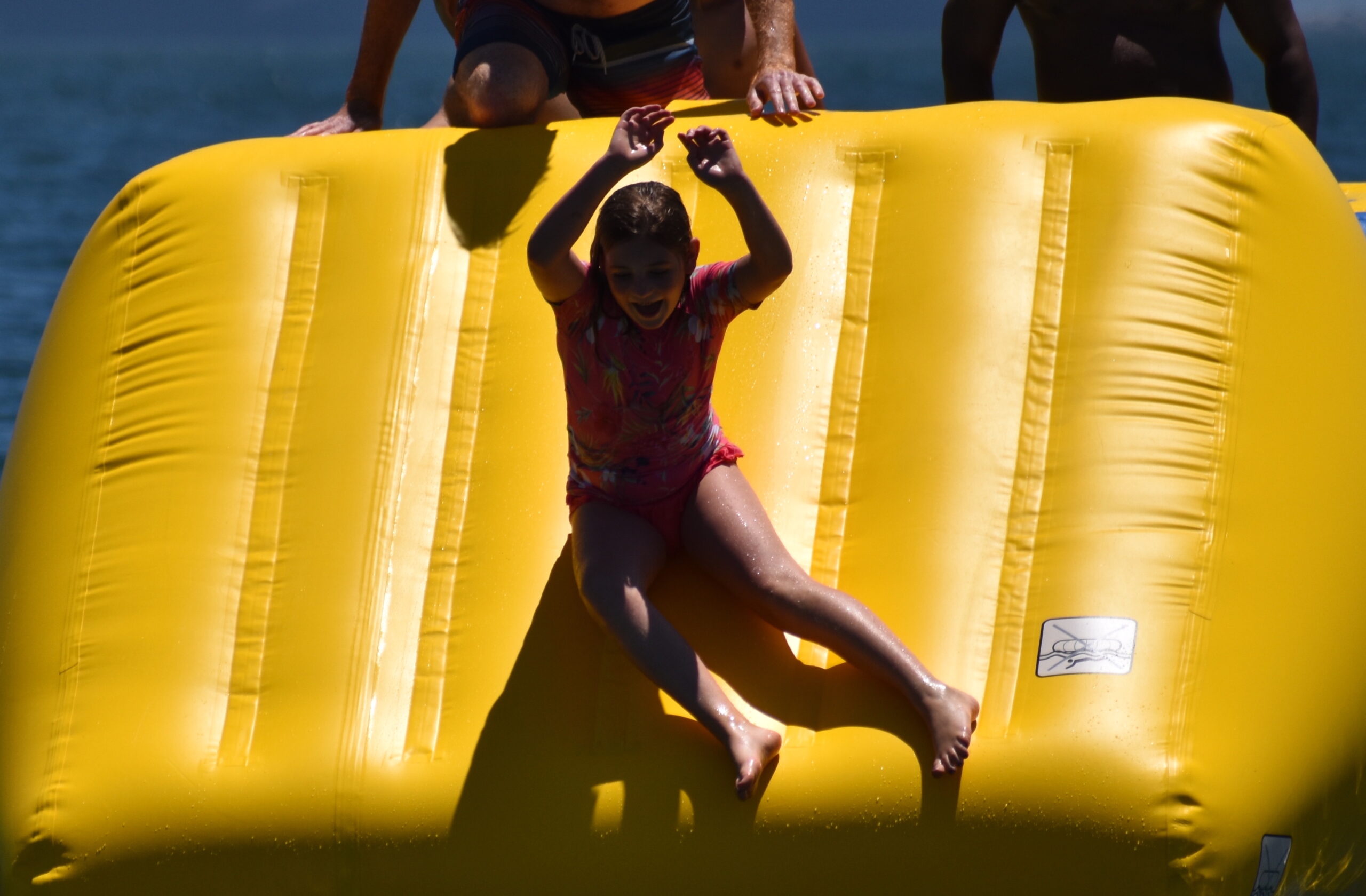 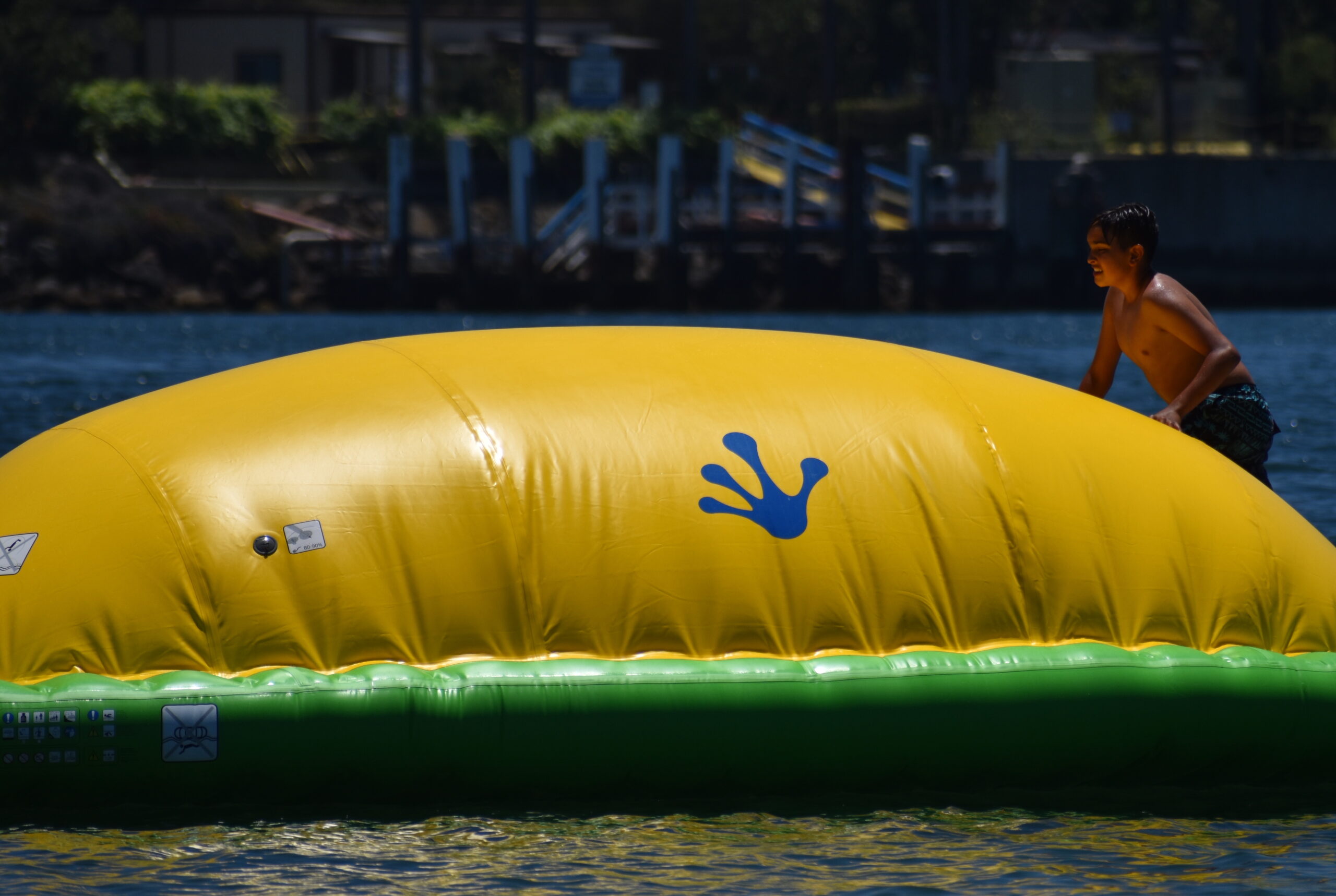 A boy attempts to make his way past a bump that kept springing people off the new Wibit at Alamitos Bay Saturday, June 25. Photo by Fernando Haro. 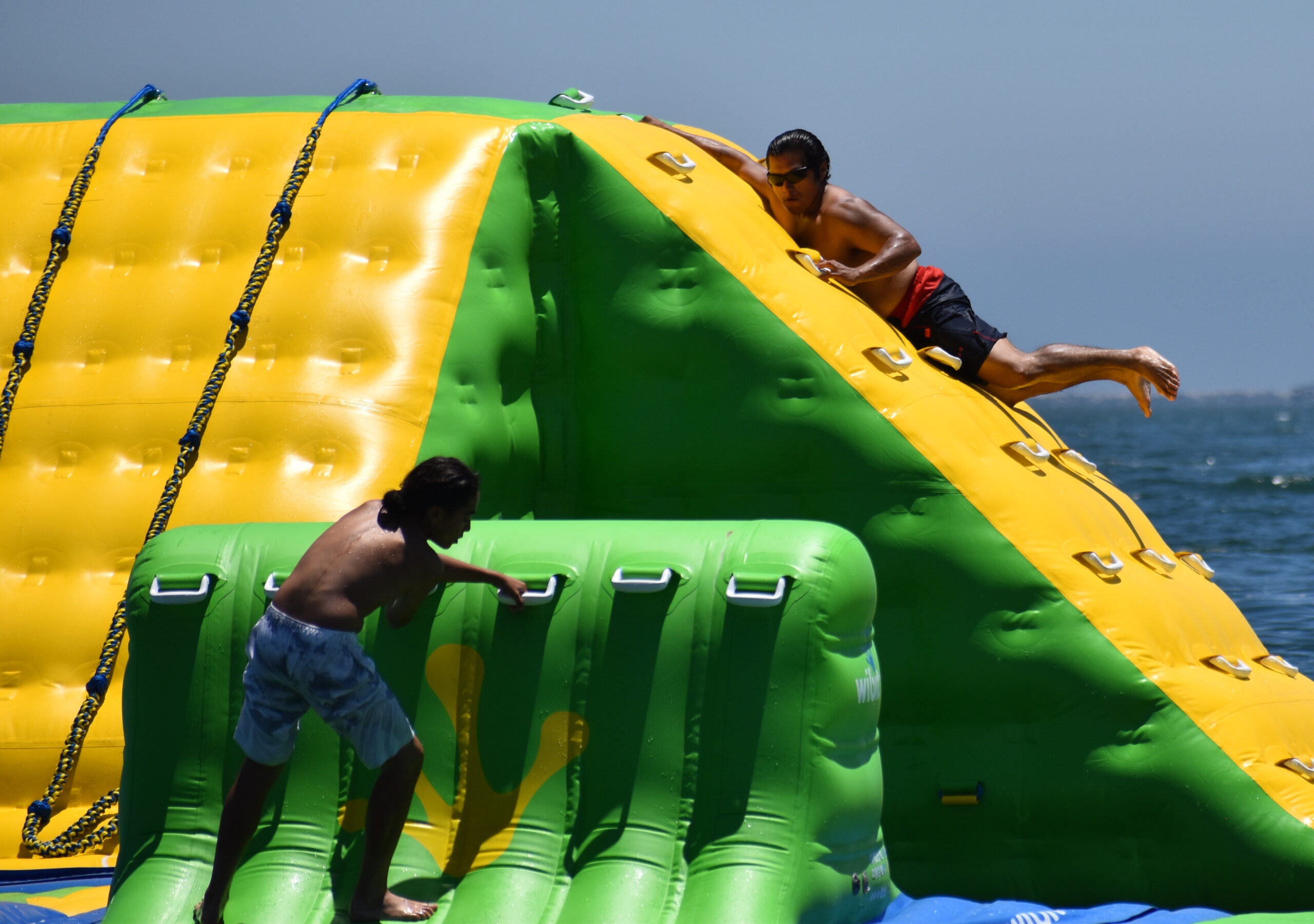 A man slides down belly-first on a ramp at the new Alamitos Beach Wibit Saturday, June 25. Photo by Fernando Haro.

The Wibit will be open to the public from 9 a.m. to 8 p.m. daily until the end of the summer season. Children under the age of 14 must be supervised when playing on the structure.