Before Khmer Girls in Action became the organization it is today, it was a project known as HOPE for Girls, which served Cambodian girls attending Poly High School, beginning in 1997.

Although it was initially focused on reproductive health, throughout the years, Khmer Girls in Action has grown in size and scale in response to the changing political landscape, said Joy Yanga, communications director of the organization.

For the organization’s founders, whose families had survived the Khmer Rouge genocide in Cambodia and had resettled in Long Beach, they found themselves in neighborhoods that were in huge need of support and services, Yanga said.

“The young people who founded the organization knew that they needed something more than the things that they had access to,” Yanga said.

It was difficult filling in the gaps that were not available to their parents when it came to housing, employment and language access, Yanga said.

“All of those things fell on young people,” Yanga said. “Throughout the years, they had built a muscle to advocate for policy change and systemic change to include their families, themselves, to live with dignity and opportunity and resources.”

Although the organization began with programs targeted specifically at young women, in 2010, Khmer Girls in Action piloted its first program for young men. Now, it’s open to not only Cambodian youth, but anyone of Southeast Asian descent attending high school in the Long Beach Unified School District.

“The feedback that we were getting from our young women leaders was that when we were teaching them about healthy relationships and ways to improve the conditions in their community, they would come home and oftentimes the men in their lives, boys in their lives, also needed to understand that same framework,” Yanga said. “They also had to unpack what toxic masculinity looks like.”

At Khmer Girls in Action, members in their freshman and sophomore years of high school begin in the Young Women’s and Young Men’s Empowerment programs, where they are introduced to gender and reproductive justice, and what advocacy can look like, Yanga said.

“In our introductory programs, young people learn about themselves, their culture, their history,” Yanga said. “That’s when they start to learn about being more active in campaigns.”

For many of Khmer Girls in Action’s 60 to 80 participants, most of whom attend Poly High School or Wilson High School, not only is involvement with the organization an opportunity for empowerment and to advocate for change, but it can be a chance to connect with their cultures, Yanga said.

“KGA is many things for young people, Oftentimes they say that KGA is a second home, or like a second political home,” Yanga said. “Because of those factors . . . they get to find themselves again and find healing.”

“It’s really clear to them once they started learning that cultural piece, of why there was a generational disconnect,” Yanga said. “It’s not just because they’re older and younger. There was something else that happened historically and politically that kind of forces a gap between the two generations.” 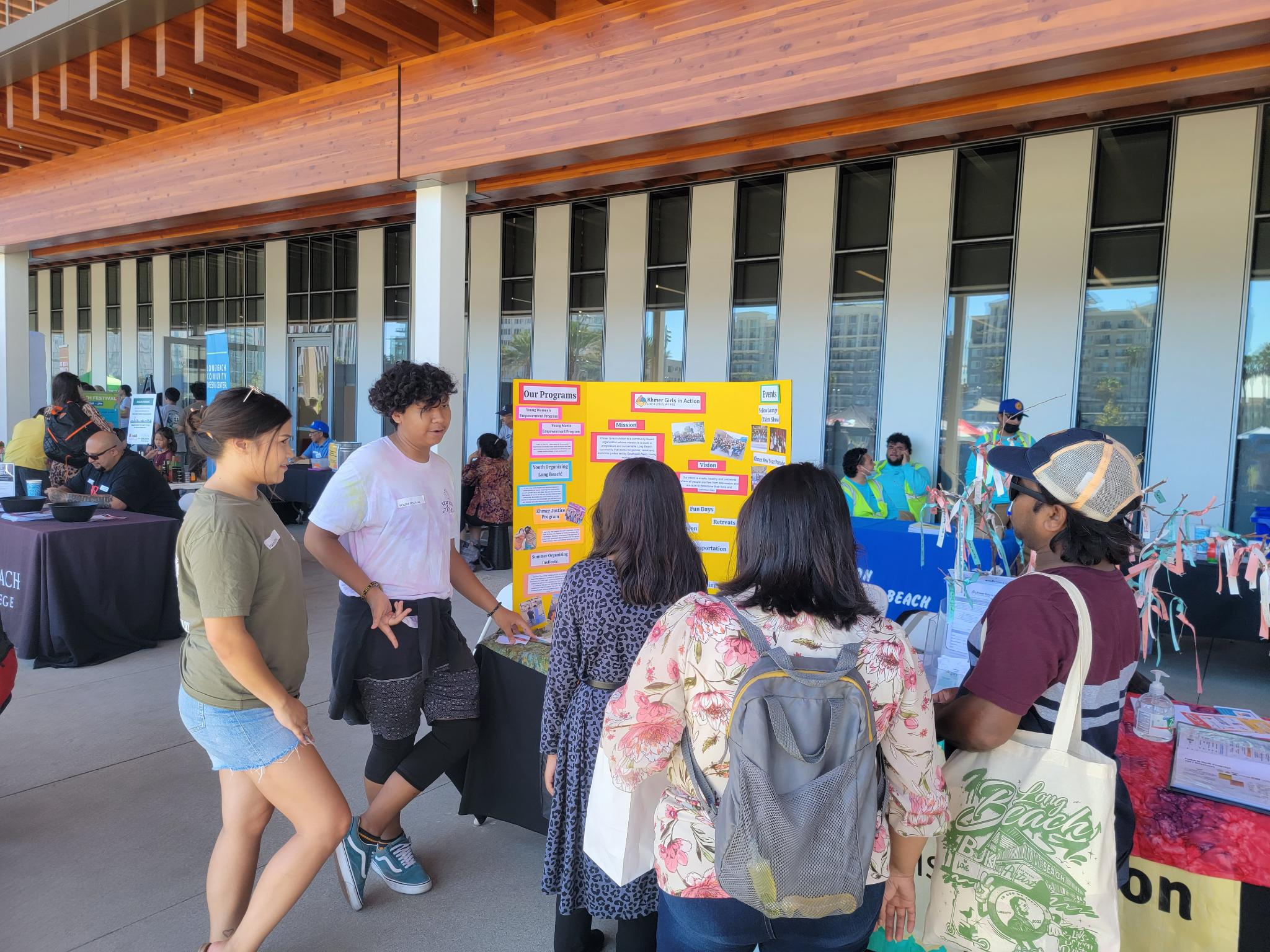 After Khmer Girls in Action’s introductory programs, sophomores and juniors then graduate into the Youth Organizing Long Beach program, where participants learn organizing skills and apply their knowledge to campaigns. Juniors and seniors can then deepen their political analysis skills further with the Khmer Justice Program, which provides the opportunity to lead campaigns.

Occasionally, students even get the opportunity to share their stories at delegation meetings with City Council or state representatives, Yanga said.

Within Khmer Girls in Action’s numerous programs, youth empowerment through civic engagement and advocacy is a key tenet, and election season or not, members of the organization attempt to reach voters three times each year, Yanga said.

Past efforts have included advocating for COVID-19 vaccine awareness and spreading awareness of an increase in violence against Asians since the pandemic, said Yanga. In the most recent election, members have advocated for Proposition 1 and support of reproductive justice, she said.

“We have a lot of hope for the youth. The youth are just so brilliant and amazing leaders,” Yanga said. “They hold so much for their families and communities.”

The young adults leading the efforts, Yanga said, are themselves often at the margins.

“As a whole, for organizations who serve communities in districts like ours—District 6, 9, 1 that have been deeply underfunded neighborhoods—in general, we’re struggling collectively,” Yanga said.

Since the pandemic, many smaller nonprofits led by women or people have color have struggled to receive funding, and it can often feel like those organizations have to compete among each other for funding, Yanga said.

“A lot of things we’re fighting for stem from systemic oppression, or the ways communities are divested” from, Yanga said. “The same resources aren’t funneled into our schools, or the people who live in our communities don’t have access to apply for home loans, or to have the ability to do that kind of economic upward mobility.”

But amid the challenges, Khmer Girls in Action has had many successes in its 25 years, Yanga said.

“KGA started and operated out of a trunk of a car,” Yanga said. “That just shows that young people really needed resources.”

Throughout its 25-year history, Khmer Girls in Action has supported numerous statewide and local issues, has held wellness and health events, and last year, the organization celebrated the establishment of the Long Beach Youth Fund.

And as for the future of Khmer Girls in Action—that is for the youth to decide, Yanga said. However, many youth have expressed an interest in having a youth center.

For the young adults who go through Khmer Girls in Actions’ programs, the hope is that they know they have shaped the community positively and that there is a space for them to affect policies, Yanga said.

“At its basic form, they learn to advocate for themselves,” Yanga said. “Culturally, it’s a common thing for young people or even Asian folks to feel like they can’t take up space or ask for things, because we’ve been conditioned systemically to just live with the bare minimum.”

Youth that are involved early on with civic engagement are more likely to continue to that involvement into adult years, Yanga said.

Empowered with an awareness and understanding of the root causes of systemic barriers, they can successfully advocate both for themselves and for their communities, Yanga said.

“Those rights don’t just belong to select few,” she said. “The hope is for them to have all the opportunities they need and deserve to determine their lives. . . . Those barriers don’t have to stand in the way of them and the lives they dream of.”

Donate to Khmer Girls in Action, or sign up to volunteer.