Kirk Davis, co-founder of the Puente Latino Association neighborhood group, was taking an evening stroll Wednesday when he noticed signs posted on a chain link fence running along a stretch of the 91 Freeway.

At the overpass on 67th Street from Atlantic Avenue to Cherry Avenue, were signs from Long Beach Public Works telling residents that crews would be drilling in the soil next week in preparation of an upcoming freeway widening project. Any car in the way would be towed.

But Davis found what he thought was one glaring problem: The signs were only in English, which he felt excluded the large number of Spanish-speaking residents living in his North Long Beach neighborhood.

About 18% of the population in Long Beach reported that they speak English “less than very well,” according to a 2019 community health assessment from the city’s Health and Human Services Department. In the 90805 ZIP code in North Long Beach, about 25% of the population have trouble speaking English.

Davis argues the lack of signs posted in the languages residents best understand is a violation of the city’s language-access policy, a set of guidelines the city adopted in 2013 to improve communication with the city’s diverse population.

“There’s too many instances where the city doesn’t follow their own policies,” he said. 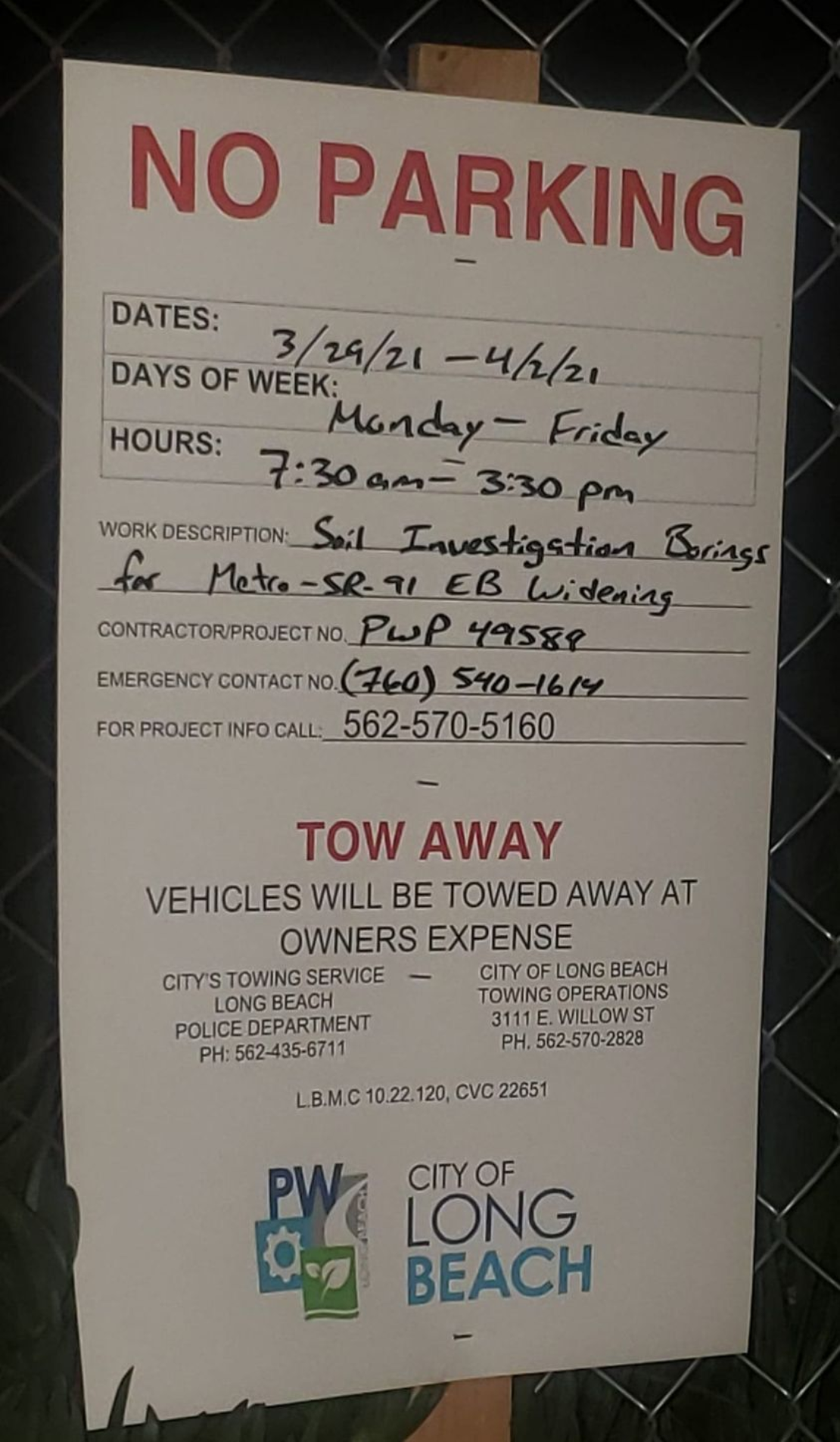 A sign from Public Works warning residents about an upcoming construction project near the 91 Freeway in North Long Beach. Photo courtesy Kirk Davis.

Jennifer Carey, spokeswoman for the Public Works Department, said the department was working to translate the signs and documents it puts out into the community, but due to the overwhelming amount of materials that need to be translated as part of the policy, the process is still ongoing.

“We have prioritized project/construction door hangers and COVID-19 program messaging to start, and I am now working bureau by bureau to update all their materials and eliminate the old versions,” Carey wrote in an email.

This isn’t the first time Davis has questioned the lack of translated public notices. In January, Davis and his wife Hilda Gaytan sent a letter to CalTrans to demand a public hearing for a proposed freeway expansion project and to collect public input in both English and Spanish.

In early March, Davis, along with Long Beach environmental activists groups, sent a public comment response to CalTrans reiterating the concern about a lack of outreach efforts to inform the community of a proposed freeway expansion in both languages.

“Federal guidance on [National Environmental Protection Act] stresses the importance of translating environmental review documents if the community affected by the project speaks a language other than English,” the letter read.

CalTrans did extend the public comment window to 28 days after pressure from Davis and Gaytan.

Davis said there are multiple neighbors in the area that would like to know more about the project but are not seeing information abut it in their native language.

In the letter, the activists say the construction around the 91 Freeway expansion project will create environmental hazards that community members deserve to be aware of.

How soon that will happen—or how soon Long Beach will have all of its notices translated is unclear.

Long Beach adopted its language-access policy in 2013 to include more languages such as Khmer and Tagalog. Translating city documents and memos is not only time consuming but also expensive. It costs about $109,125 to translate public meetings and hearings.

“Public Works has a lot of public facing signage so [it is] difficult to say which is more important than the other,” Carey wrote. “We just want to ensure that this translation effort proceeds as quickly and accurately as possible.”

Editor’s note: This story has been updated to clarify Davis’ and Gaytan’s communications with CalTrans.