At Poly, thousands of students packed into the school’s quad to listen to student organizer Tom Wood and other speakers call for tighter gun control laws at a state and federal level.

“Our leaders have done nothing, and we’re tired,” said Wood, who also voiced displeasure with some popular national talking points about increasing security at schools as a way to deal with the issue. “We don’t need more guns to be more safe—we don’t want our schools to be like prisons.”

The crowd gave big applause to that idea as Wood also called for banning semi-automatic and automatic rifles.

Wood was one of the core group of four LBUSD students who got the ball rolling on the citywide event in response to the shooting in Uvalde, Texas that left 19 elementary school students and two teachers dead. Other speakers and organizers included Ariana Lopez and Audree Rios. Many students in attendance wore white T-shirts with messages written on the front and the names of students killed on campuses on the back.

A long moment of silence also recognized the lives lost to school shootings in America over the last two decades, with a second of quiet for each victim. In addition to other student speeches, those in attendance were given an opportunity to take action, with letters to elected officials printed to be signed, as well as sign-making stations and voter registration forms.

The cardboard protest signs waiting for Wilson students to hold when they walked out of their classrooms on Friday did not mince words.

We Are Not Target Practice

“We wanted it to be really powerful messages and a unified message that we need gun control,” said Wilson junior Anika Stewart. “We don’t want to die at school.” 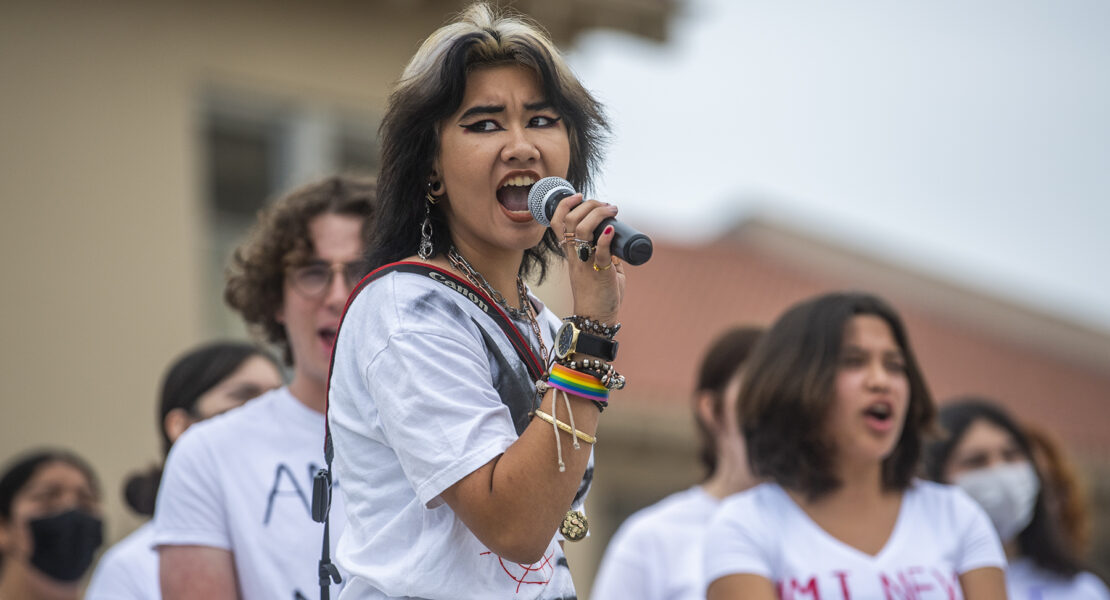 Stewart, 16, was the lead organizer of the Wilson protest and was one of a handful of students who took the microphone on the rally stage to express their strong desire for more gun control and protection from gun violence.

She said that she wanted her fellow students to understand that, “Their voice needs to be heard because they need to know they have power too.”

The cardboard for the signs was donated by Stewart’s mother, and she got help making them from other Wilson students like junior Aaliyah Rincon. 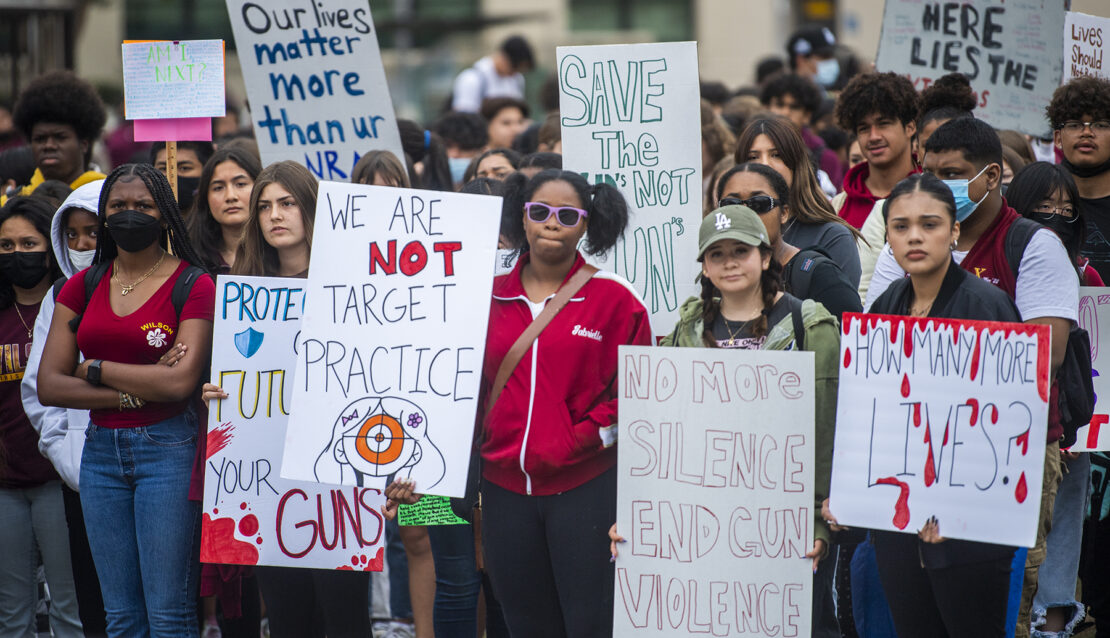 “I really wanted to help because I (post on social media) a lot about this and (Stewart) knew that I felt strongly about this,” Rincon said. “I’m happy I did it. We want other schools to get involved. We want the city, the district and the whole country to know that our future generation feels really strongly about this and we’re not going to stop fighting for this.”

Stewart and her fellow organizers provided a table at the rally stage where students could write letters to school shooting victims’ families and to senators asking for change. There were also voter pre-registration forms for any student over 16.

The most moving scene of the protest was the moment of silence when Stewart read out school shootings and the number of victims. As she did, that number of students on the stage sat down.

“It was giving them a visual of how many people are actually affected by these things,” Stewart said.

Stewart added that she thinks LBUSD high schools should have bulletproof glass on the first floor and that the active shooter drills on campus are no longer as useful as they once were.

“There are fire alarms that go off every single week at school,” Stewart said. “They’re extremely loud and no one does anything. The fact that we’re so desensitized to alarms that should be warning us that our lives are at risk is really bad.”

An estimated 1,500 students at Millikan High School flooded the football field during Friday’s walkout, with several carrying signs calling for a change to gun policy in America. Sophomore Carter-James Kutz was one of the main organizers of the Millikan protest, which was an idea that actually started earlier this year.

“Over quarantine, I became very heavily into politics and social justice, and after the Michigan shooting earlier this year I reached out to a friend and asked if they knew how to organize a walkout,” Kutz said. “I wanted to not only protest gun violence but also let other students know that they aren’t alone in their fears. And let the Uvalde families and the victims from any school shooting know they aren’t alone and that we are standing with them.”

A better look at the size of today’s student protest at Millikan. @LongBeachPost pic.twitter.com/TjzUgUKG0j

The students returned to the school’s quad during lunch where they wrote letters to Congress asking for stricter gun laws.

“I’m just really just sick and tired of all the violence,” said Millikan sophomore Kaitlyn Lee. “I see it happening every day, and I see how desensitized everyone’s becoming to gun violence. It’s not right. It’s not normal … We need to start being proactive rather than reactive, and create a better future for ourselves, our kids, and their kids.” 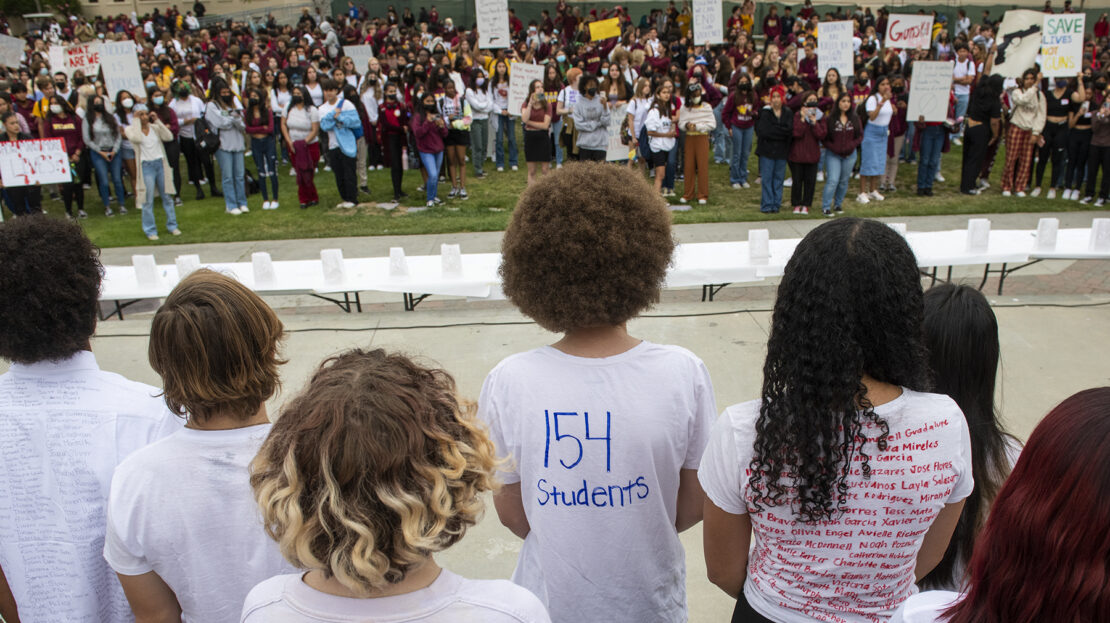 Over a thousand Wilson High School students walked out of class to demonstrate in favor of gun control. Photo by Thomas R. Cordova.

It’s been a particularly distressing school year at Millikan, where just a block away from campus 18-year-old Mona Rodriguez was shot and killed by a school safety officer back in December, according to authorities. The school also endured a bomb threat on campus this year.

“When it did happen so close, it was extremely unsettling,” said senior Sophia Moore. “Luckily I was at home when that shooting happened, but my best friend was at school so close to it. Honestly, it’s just disappointing that it’s still something that we’re seeing on a daily basis.”

While other schools held rallies at campus quads or fields, Renaissance students marched off campus and to nearby City Hall, saying the on-campus demonstration supported by school administration wasn’t adequate.

Students from Renaissance High School have left campus, marching to City Hall to continue the protest against gun violence that thousands of LBUSD students across the city participated in: https://t.co/DiRoiDi7If @562sports pic.twitter.com/YlpioFYQk7

Senior Narylyna Soria said the school administration had a hand in planning the walkout, and she and other students wanted to do something more.

“They told us that they were gonna have people singing and dancing and we thought it was disrespectful to the families (of victims),” she said.

Soria said students wanted change so that they wouldn’t have to worry about mass shootings.

Listen to the student organizers’ interview with Jackie Rae on this week’s “The Word.”