All Los Angeles County and Long Beach beaches were closed Monday afternoon because of a lightning storm along the coast that drenched the area and knocked out the power for 1,800 residents in a rare but brief shower.

The thunderstorm hit Long Beach at about 4:30 p.m., briefly dumping rain on the city while moving north, according to the National Weather Service. Lightning and thunder could be seen and heard over the city in the afternoon as the storm passed over.

Showers/storms are speckling the metro area, and in the loop you can see lightning from Marina Del Ray to Huntington Beach. Seek shelter, and stay out and away from the water! #socal #lightning #LArain #Cawx pic.twitter.com/z4aTsnVUE3

The storm also appears to have caused some problems. In one case, a fire engulfed several trees next to a home in East Long Beach on the 5200 block of Spring Street just before 5 p.m.

First time I’ve ever heard lightning at our house and it absolutely engulfed the trees in the neighborhood across the street pic.twitter.com/2WrWSRPMy3

Flames spread from the tree to the outside of the house, but the inside was undamaged, and no injuries were reported, he said.

About 20 firefighters quickly knocked down the fire, Crabtree said. 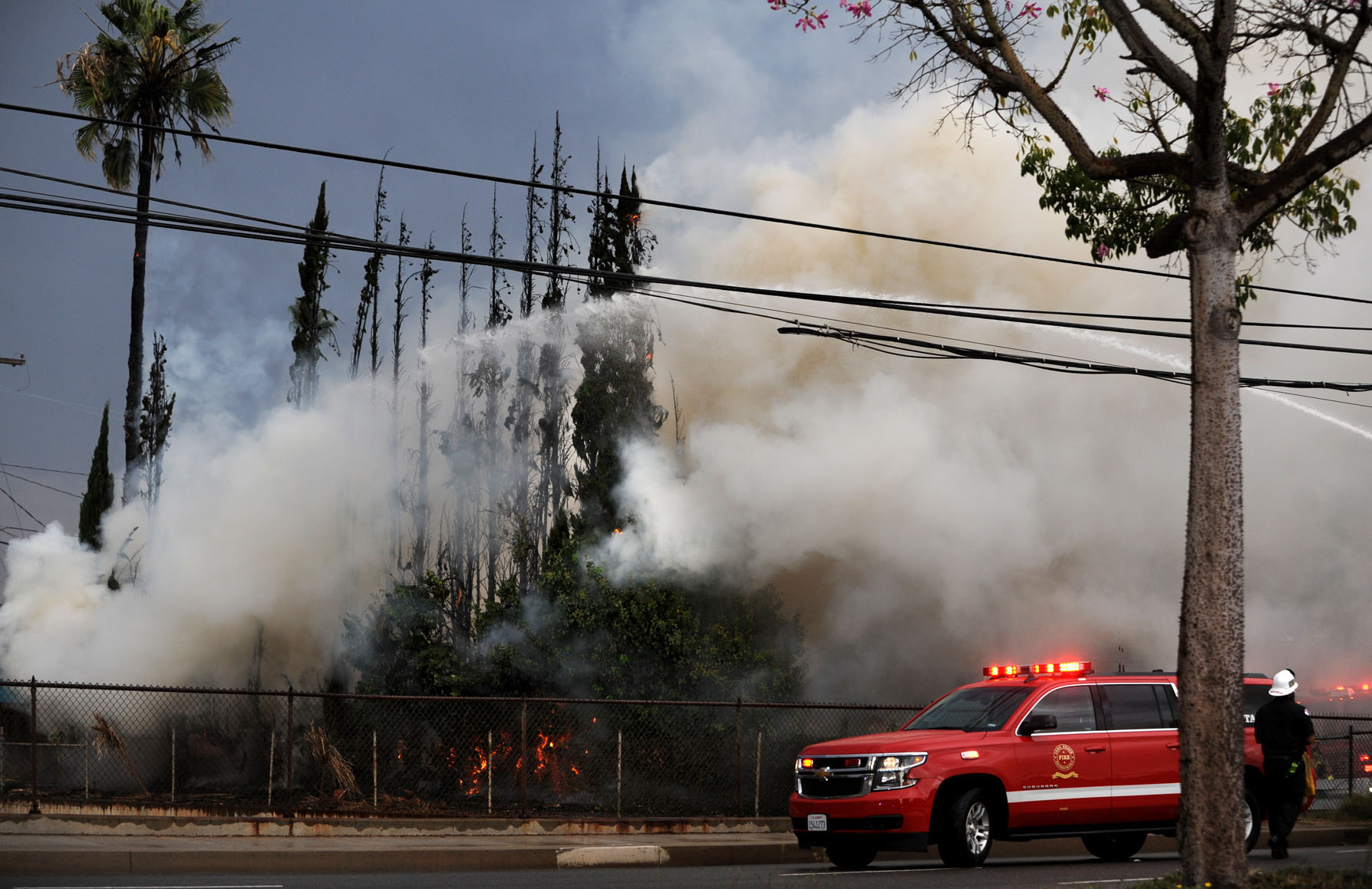 Long Beach Fire Department crews at the scene of a fire at the corner of Rutgers Avenue and Spring Street on Monday afternoon. Photo by Stephen Carr. 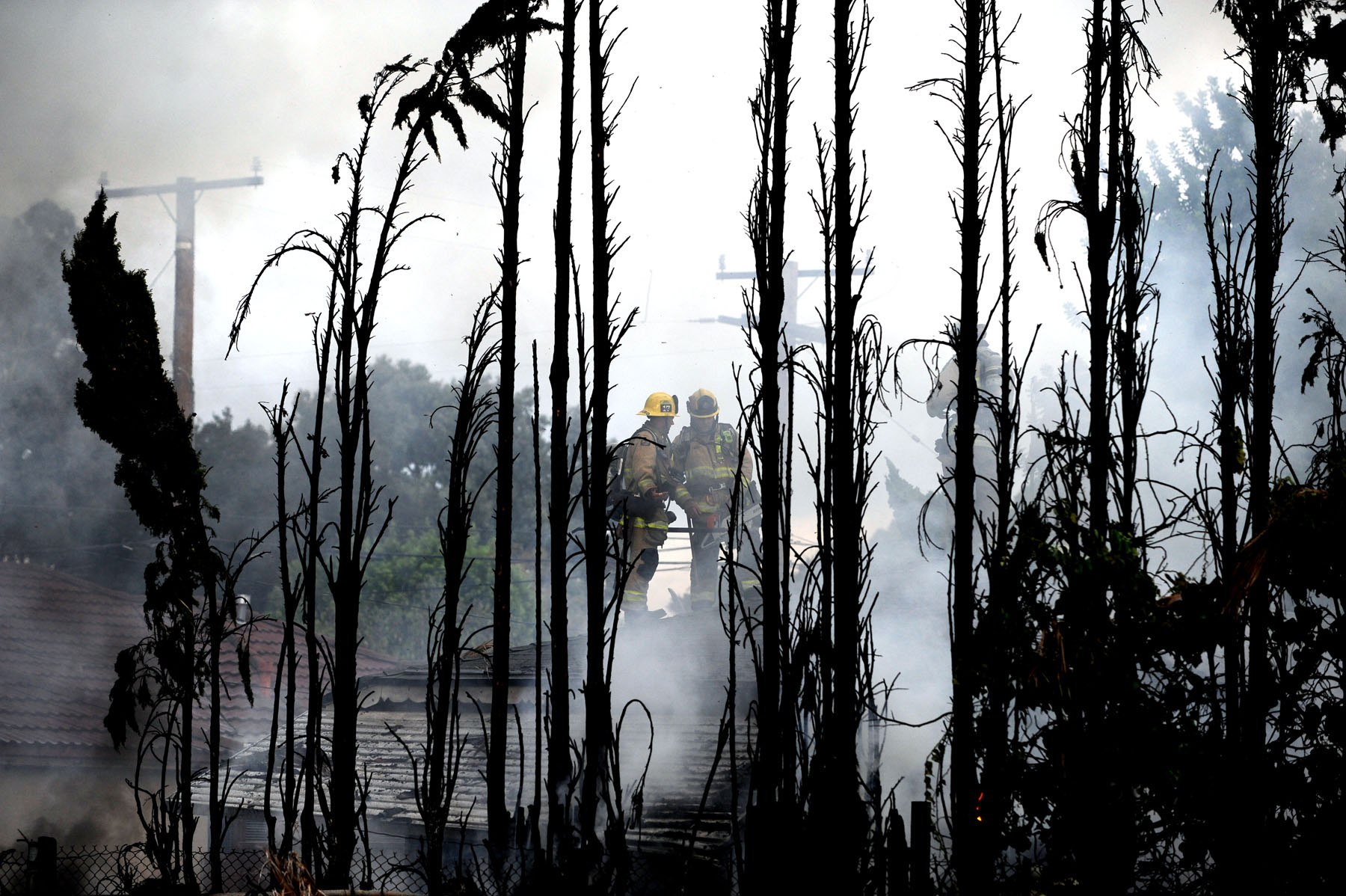 Long Beach Fire Department crews at the scene of a fire at the corner of Rutgers Avenue and Spring Street Monday afternoon. Photo by Stephen Carr.

At around 5:30 p.m., more than 1,800 SoCal Edison customers lost power in the West Long Beach area, according to SCE spokesperson Ben Gallagher.

While it’s unclear when power will return in the area, crews are on scene and there are currently 1,113 customers still affected by the outage, Gallagher said.

“It’s likely the results of the lightning, thunder, rain,” he said.

After days of above-normal heat, a low-pressure system moved into the Southland today, bringing driving the rain to some areas along with booming thunder and lightning strikes.

The National Weather Service initially warned of a band of storms moving over the ocean toward Catalina Island. But by late afternoon, clouds darkened the skies over much of the Southland.

NWS forecasters said the chance of thunderstorms would continue through late Monday night.

📣 Public Safety Alert: Please be advised that Marine Safety crews will be closing all beaches temporarily due to visible lightning South/Southwest of Long Beach.
We will monitor the weather and advise when beaches will be reopened. pic.twitter.com/IPNyObNvVT

Send us your best lightning shots! (@Artscphoto is struggling to catch the shot) pic.twitter.com/aMD2Kfh5tF

Editor’s note: This story has been updated with additional information on a fire incident and power outage.