In 1907, the upper-class town of Naples was growing, but not quickly. It wasn’t going to be the sort of tract where hundreds of teams of builders descend and throw up cookie-cutter houses to peddle to the masses. An advertisement from the father-son team of A.M. and A.C. Parsons, the early developers of the area, announced in 1907 a plan to build 12 new residences within two months on the island. The construction, they said, “would more than double the amount of Naples residences” on what they termed “Riva Alta” canal, presumably what’s today known as Rivo Alto. All of the dozen new houses would, as per early Naples building regulations, be white with red-tile roofs. 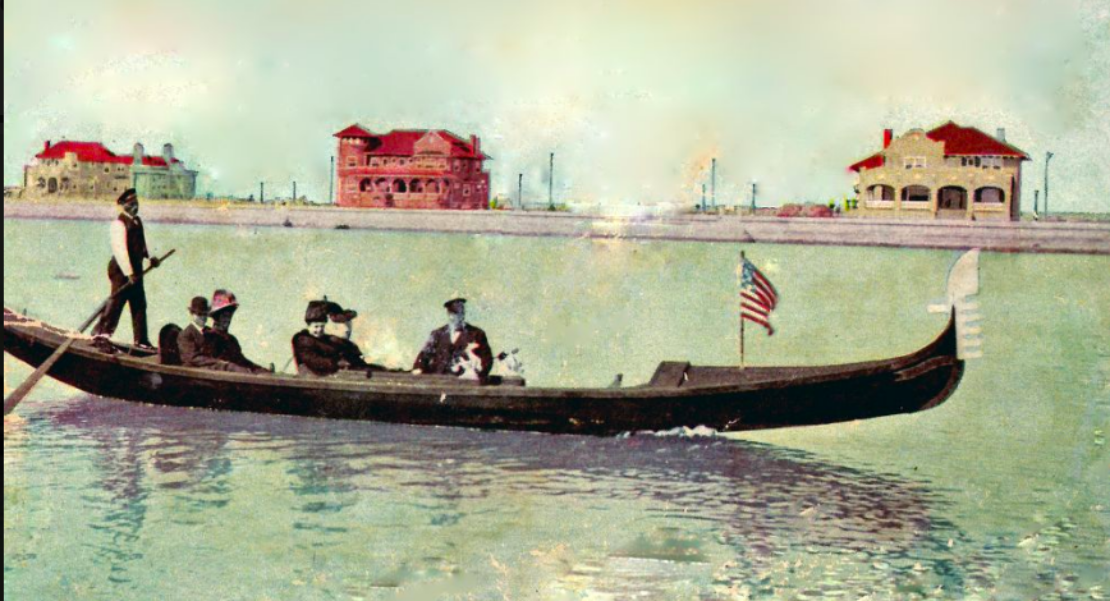 Also in the plans was a luxury hotel, which would be the centerpiece for the neighborhood.

The Naples Hotel, sometimes called Hotel di Napoli, or the Napoli Hotel, was built by Mira Hershey, a distant relative of chocolate magnate Milton Hershey, but wealthy in her own right after inheriting millions of dollars from her father Benjamin’s lumber business.

After moving to Los Angeles and settling into a mansion on Bunker Hill, she took an excursion to Hollywood and was so smitten by the Hollywood Hotel at its original location on Hollywood Boulevard and Highland Avenue that she purchased it in 1907.

Hershey also invested in Naples, buying several lots in the area, including a large one on what would be Ravenna Drive. Henry Huntington, who had extended his rail line from Long Beach to Naples, convinced Hershey to build a hotel in Naples to draw business on his railroad. She obliged and had her architects draw up plans for the hotel that would be similar to her Hollywood Hotel.

It was designed, as was the Hollywood Hotel, as a Mission Revival/Craftsman building with twin cupolas and rooftop pavilions for viewing the bay.

As a hotel, it wasn’t much. Although Hershey owned the hotel from 1909 to 1927, she curiously never opened its doors to people wanting to book a room and even snubbed numerous offers to purchase the building.

The hotel’s main draw in those early days when Long Beach was a dry town was its license to sell alcohol, and the mostly vacant hostelry stayed afloat on booze as well as food from its dining room. It didn’t come into its own as a hotel, according to Naples historian Stan Poe, until it was sold to Realtor C.F. Higgins in 1930. Higgins remodeled and reopened the hotel, including what the Long Beach Sun reported to be a “beautiful, newly decorated dining room (where) special dinner parties will be featured. The hotel has fifty large, thoroughly modern rooms and suites. Mr. Higgins is of the opinion that the hotel will prove most popular with guests seeking a greater degree of quiet that may be found in the downtown hotels.”

And maybe it would’ve been popular, but unfortunately for Higgins and would-be guests, the decade-long worldwide Great Depression was just beginning. The catastrophic financial event would be the downfall not only of the Naples Hotel, but Downtown Long Beach’s prestigious Hotel Virginia as well.

The dwindling high society of Long Beach still met there, but the place was struggling, serving as a scaled-back convalescent home called the Naples Hotel Rest Haven, before converting to military housing during World War II. It continued to host social functions and club meetings but it never did quite achieve the high-dollar fame and fanfare of the Hotel Virginia.

In 1959, when Naples was really hitting its stride as the neighborhood its developers had dreamed of a half-century earlier, the Naples Hotel was razed to make room for the three-story Villa di Napoli luxury apartments, now condominiums, at 103 Ravenna Drive.