Let’s say you live in Saskatoon, Saskatchewan, Canada and it’s the year, say, 1925. It’s wintertime and the temperature rarely skyrockets into the teens. Do you stay and tough out the six months of winter like the rugged lumberjack you imagine yourself being, or do you load the family into the Renault and motor down to Long Beach, with Dad doing all the driving over pot-holed roads and never stopping for food or anything else until you get to Long Beach?

You make the wise decision and you get to Long Beach where you unpack and dive into the heated pool just a few steps from the startlingly blue Pacific where it’s sunny and the temp ping-pongs back and forth from 68 to 74.

A lot of people did the same thing. Tourists came to Long Beach’s Venetian Square, frequently fleeing the harsh winters of Canada and western states, places where they have extreme weather. They came by the thousands, some to spend a week, some stayed for a month, several stayed until the weather returned to normal in Montana or Idaho or the Great Plains during the span of years between Venetian Square’s inception in 1920 to the time it was demolished into rubble in 1966.

The vacation hotspot on the city’s West Beach (back in the days when the city had a West Beach), three blocks west of the opulent and luxurious Hotel Virginia, where the moneyed folk stayed, was built by Victor Hart, who, with his wife Mae Evelyn, would run the place for the entirety of its existence except for the final few years when it was acquired by the city in advance of its planned destruction to make room for shoreline development that began in the late 1960s. 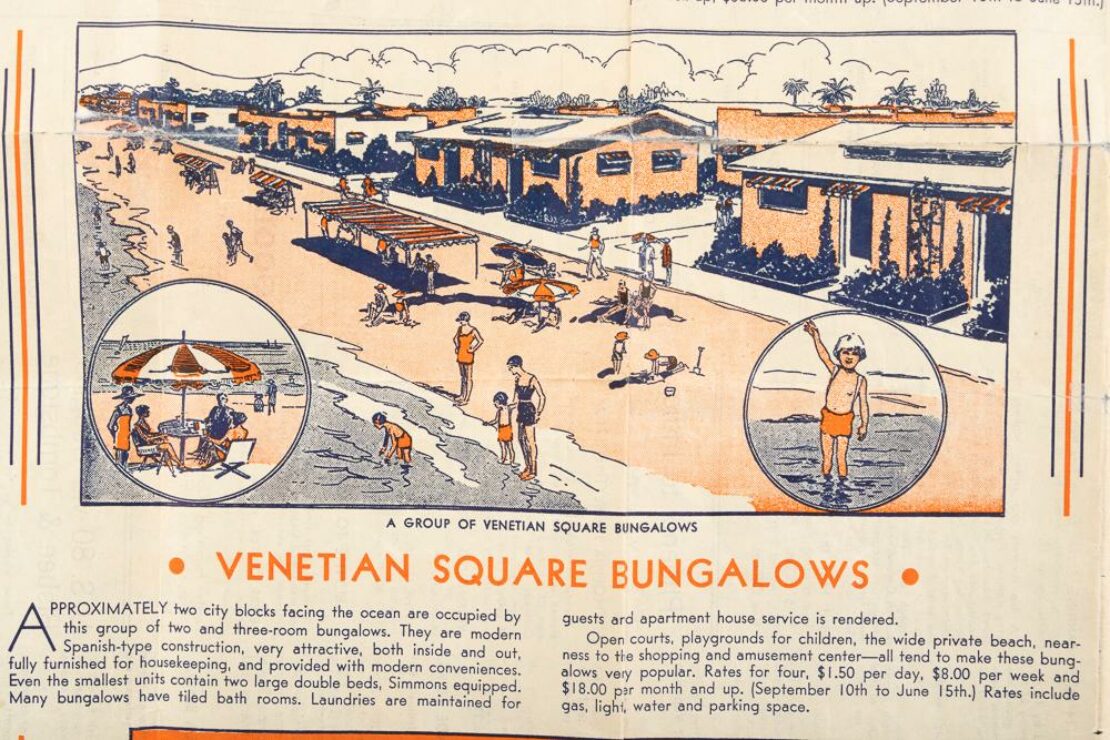 Part of a Venetian Square pamphlet showing the oceanfront bungalows.

Hart built 89 bungalows along the beach near Golden Avenue. In those early days, it was right on the edge of the ocean, though in intervening years, subsidence made additional landfill necessary, effectively moving the ocean farther away from the bungalows. Still, demand for the rooms caused Hart, who was also a contractor, to throw up a three-story hotel in just 90 days.

Meanwhile, Hart’s uncle came up with the idea to print a national road map giving directions to Venetian Square from dozens of major American cities west of the Mississippi River. Hundreds of thousands of the helpful guides, which also detailed the wonders of the resort, were distributed. The promotion worked wonders, drawing more than 14,000 guests annually to bask in Long Beach’s sunny Mediterranean climate.

Rates for the hotel and bungalows in the early years were $1.50 a day, $8 a week or $18 a month (while the neighboring Hotel Virginia charged $8.50 per night), and while some just spent a weekend, many others stayed at the resort for a month and a few stayed for as long as six months. Each of the bungalows had three rooms which were finished completely with built-in storage.

Canadians, in particular, grew inordinately fond of Venetian Square, and many came every winter and reunited with their fellow countrymen annually. In 1951, 25 Canadian families were staying at Venetian Square in February. And in that country, several vacationers got together every year near Vancouver where they celebrated an annual Venetian Square Day, sharing fond memories of their trips to Long Beach. 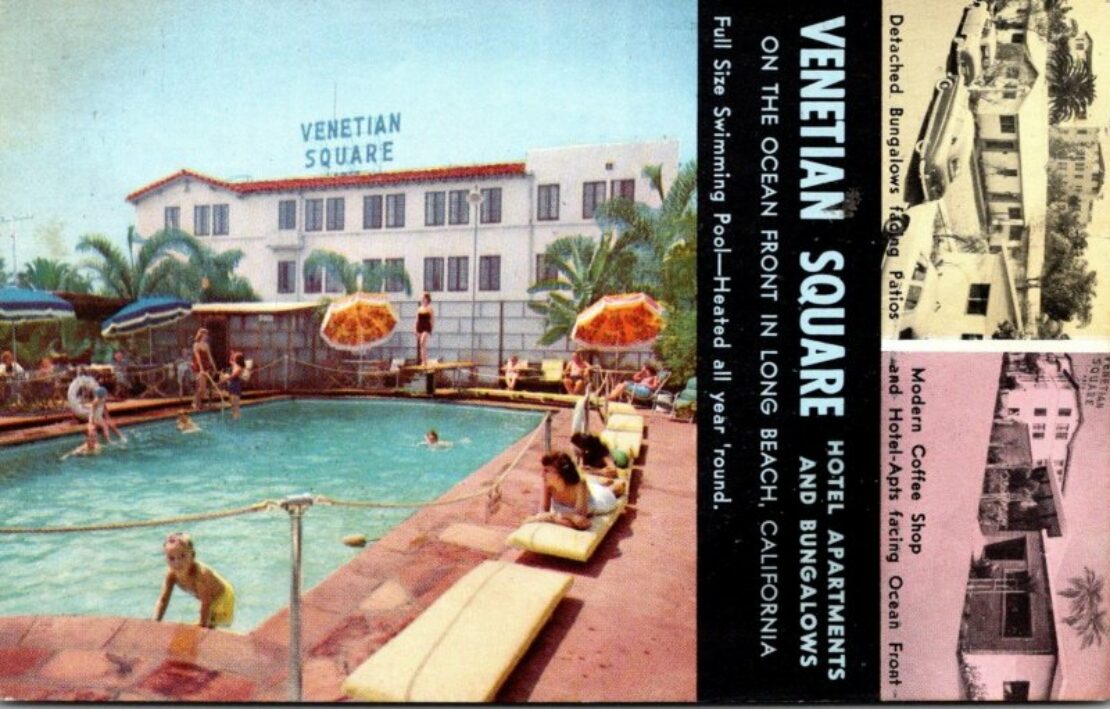 The city of Long Beach bought the property, paying Hart $695,000 in 1962, by which time he was retired on Lido Isle in Newport Beach. The city kept Venetian Square afloat for a few more years, though by then the area had lost much of its glamor, but not the affinity of its loyal Canadian customers. When it was announced that Venetian Square was to be demolished, a group of Canadians petitioned the City Council to keep it open for one more winter, but waterfront development was getting underway, and the resort stood in the way of the planned Shoreline Drive access road to the development. The place was closed to public occupancy on April 18, 1966, and it was demolished that August.

Victor Hart took it all in stride from his home in Newport Beach, where he told Press-Telegram columnist Malcolm Epley, “It was time for the old building to go. We didn’t put it up with the idea of its lasting this long.”