Long Beach plans to launch a campaign called “Help Us Help You” to educate people on when to call 911 as it faces a significant shortage in emergency dispatchers.

With a high turnover rate and lack of qualified applicants, cities across the country are seeing a mass shortage in 911 dispatchers, leaving more callers on hold for emergencies and non-emergencies.

Of the 78 budgeted positions for dispatchers in the emergency communications center, Long Beach currently has 17 open positions. The city has been ramping up hiring and retention efforts with salary increases and other incentives to lure qualified applicants.

Reginald Harrison, director of Disaster Preparedness and Emergency Communications, said Long Beach in recent years has seen an influx of non-emergency calls due to the pandemic and social issues, like the increase in homelessness.

Last year, the 911 call center received 704,692 calls for police, fire and emergency medical services, which equates to about 80 calls an hour. Harrison said 60% of those calls were for non-emergencies.

He noted that in the call center, the same team of dispatchers answers both emergency and non-emergency calls.

“We’d like the public to understand that these non-emergency calls are taking precious time away for dispatchers answering emergency calls,” he said.

In May, the city launched a non-emergency phone tree, available by calling 562-435-6711, to connect callers directly to a pre-recorded list of commonly requested non-emergency services. Harrison said the call tree has already reduced the number of non-emergency calls to dispatchers by 25%.

While the center is struggling with a staffing shortage, Harrison said dispatchers last year on average answered 80% of calls within 15 seconds, down from 85% in 2020.

Harrison said the majority of calls are answered within five seconds or less. 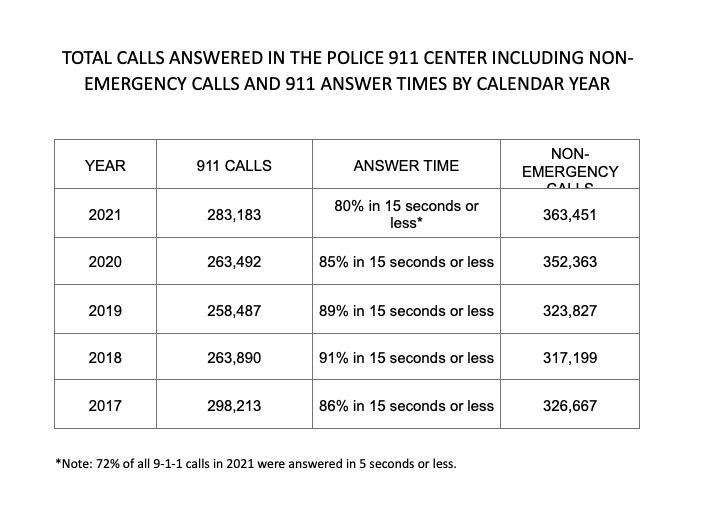 The National Emergency Number Association sets a standard that 90% of all 911 calls should be answered within 15 seconds, but cities from San Francisco to Atlanta are struggling to meet those goals as they try to recruit and retain qualified staff.

Long Beach recruits and trains an average of 20 dispatchers per year, but the attrition rate is high, Harrison said. Since 2019, the 911 Center has hired 50 dispatchers, and during the same time, 54 dispatchers left due to a combination of probationary resignation, dismissal, resignation and retirement, officials said.

A tough job that can have a high burnout factor, 911 operators must undergo intensive background checks and training, and a year-long probationary period. The pay for the city’s dispatchers ranges from $30 to $40 per hour, depending on their level of experience and seniority.

He said the city is hoping to reduce stress on its current staff by further educating the public on when to call for help. In the event of a police, fire or medical emergency, residents should always call 911, but Harrison said many people call for non-emergencies or even if they just need information on city services.

And in a case where someone isn’t sure what number they should call or whether it’s a true emergency, Harrison said they should dial 911.

“If they’re just not sure, I’d rather have them error on the side of dialing 911,” he said.