City officials on Thursday said they will allow limited indoor dining at restaurants as soon as Los Angeles County qualifies for the “red” tier in the state system for determining the danger posed by COVID-19, which could happen in a matter of days.

In the red tier, jurisdictions can allow indoor retail shopping at 50%, gyms and fitness centers to operate indoors at 10% capacity, movie theaters at 10% capacity or 100 people (whichever is lower), and indoor dining at restaurants at 25%. Long Beach is currently in the widespread “purple” tier, which only allows restaurants to serve customers outdoors, with limits on seating, while gyms, movies theaters, aquariums and other venues must keep indoor operations closed.

Bars and breweries—businesses that serve alcohol but not food—must remain closed in both the red and purple tiers.

LA County could qualify for the red tier, “as early as in the next day,” Mayor Robert Garcia said. “It’s really dependent on the state and when we get that approval.”

County officials, however, gave a more conservative estimate for when they will move tiers, guessing that it would be between midnight Monday and Wednesday.

Long Beach, which has its own health department, will allow mostly what the state allows, possibly with some small adjustments, Garcia said at a media briefing Thursday in front of Kress Market in Downtown—the city’s first in-person briefing in months. 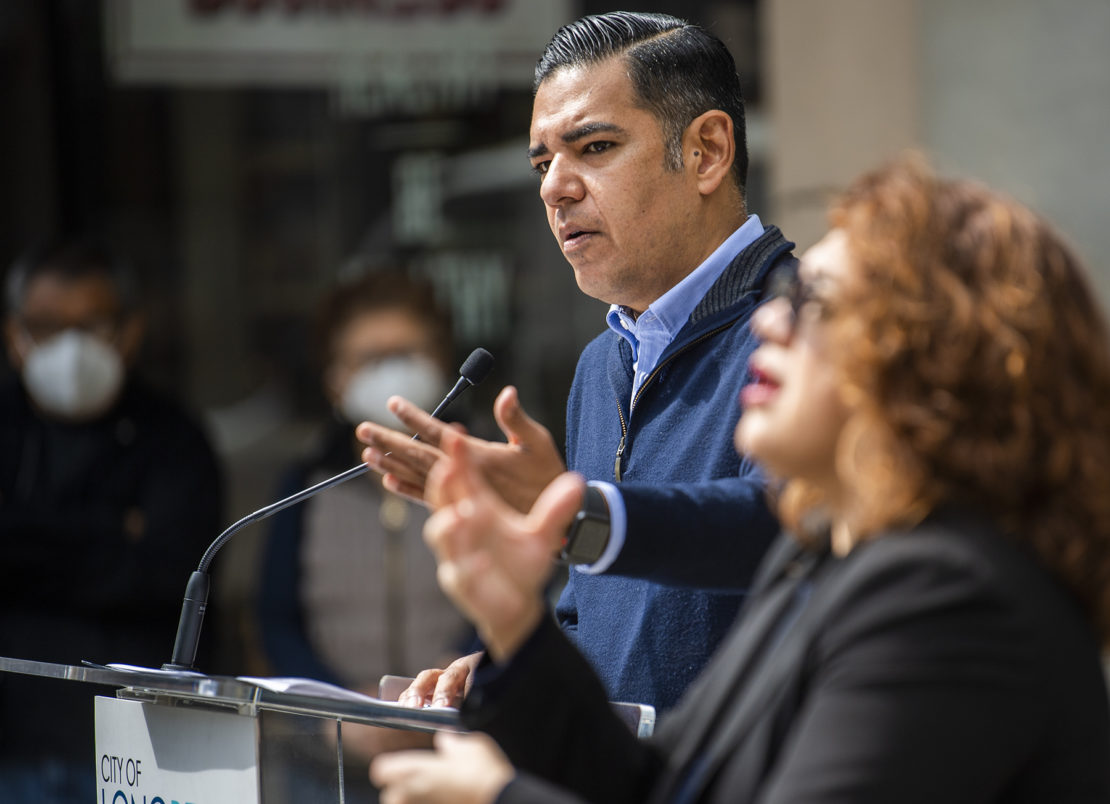 “We feel so good about our numbers,” Garcia said, that the city is willing to make this decision on its own, without waiting to see what the rest of LA County does. Often the city has followed the county’s lead on what to allow.

The city reported just 22 new cases of the virus on Wednesday, with a seven-day positivity rate of 2.3%. Just eight weeks ago, in mid-January, that number was close to 18%.

While the city will relax its health orders as early as Friday, depending on when the state allows it, health officials have urged continued caution due to the prevalence of variants of COVID-19 that are now spreading.

The city’s health officer Dr. Anissa Davis on Thursday urged residents to not become lax as COVID-19 is still prevalent in the community.

And although the county public health director repeatedly cited the risks involved with indoor dining, the county Thursday afternoon said it will also largely fall in line with the state when more businesses are allowed to reopen.

The county rules will allow indoor dining at 25%, with servers and other workers urged to get vaccinated. Tables will be situated at least 8 feet apart, and will be restricted to a maximum of six people from the same household.

Other rules released by the county:

Moving to the red tier will also allow the reopening of theme parks as early as April 1—including Disneyland in Orange County and Universal Studios Hollywood in Los Angeles County—at 15% of capacity, with in-state visitors only.

The rules also permit resumption of activities at institutes of higher education, and reopening of in-person instruction for students in grades 7-12. Private indoor gatherings are also permitted for people from up to three different households, with masking and physical distancing. People who are vaccinated can gather in small groups indoors without masking or distancing.

The exact timing of when the county will move tiers depends on when the state meets a threshold announced by Gov. Gavin Newsom to administer 2 million doses of COVID vaccine in the state’s lowest-income communities.

Editor’s note: This story has been updated with information from Los Angeles County. City News Service contributed to this report.