At Barton Elementary on the border of Bixby Knolls and North Long Beach, the mood Wednesday morning was more like a party than like a school day. Balloon arches, high-fives, and TV cameras greeted students, parents and teachers as they streamed on campus for the first day of school.

There was a similar mood all over the city as the Long Beach Unified School District and its 67,000 students began the 2022-23 school year at its 85 campuses. 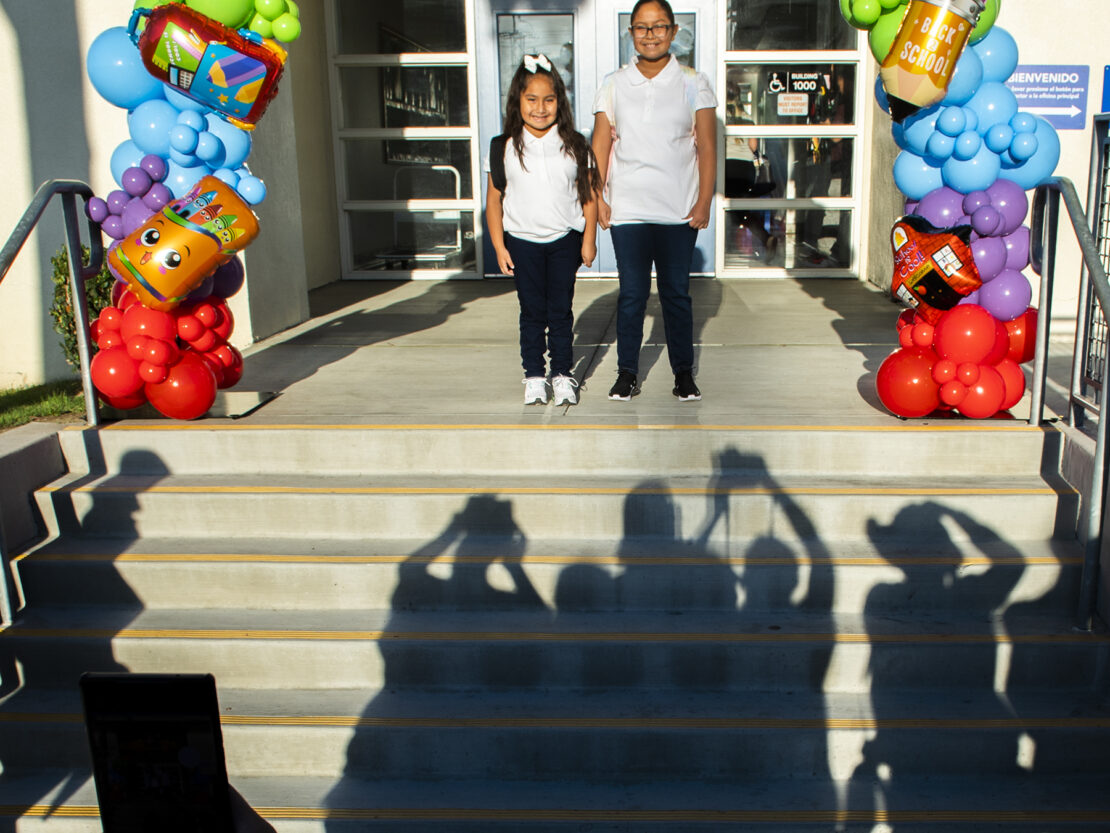 Jaylah, 6 left, and her sister Janessa Gutierrez, 10, stand on the top of the stairs as shadows of their parents and members of the media take their photo during the first day of school at Barton Elementary School in Long Beach on Wednesday, Aug. 31, 2022. Photo by Thomas R. Cordova.

“We’re super excited for the start of the school year; this week feels like a tremendous sense of optimism,” said LBUSD Superintendent Jill Baker. “There’s a lot of new things going on in our school district and we’re looking forward to the school year.”

The biggest change for the LBUSD and the city’s families is the start of full-day kindergarten classes, which arrive after decades of half-day classes that had parents either picking up kids in the middle of the day or paying for childcare before or after class.

Sylvia Fragoso, a Barton parent, has adult children who went through the LBUSD and was dropping off her son Andres for his first day of full-day kindergarten on Wednesday.

“I’m relieved. It’s more time in the day to not be worried about where he is and pick-ups,” she said, with her son Juan (a CSULB student) translating from Spanish. “I’m looking forward to knowing that he’s learning and he’s safe all day. I’m happy, but at the same time a little sad because my baby is older and he won’t be in the house all day. But he’s in good hands.” 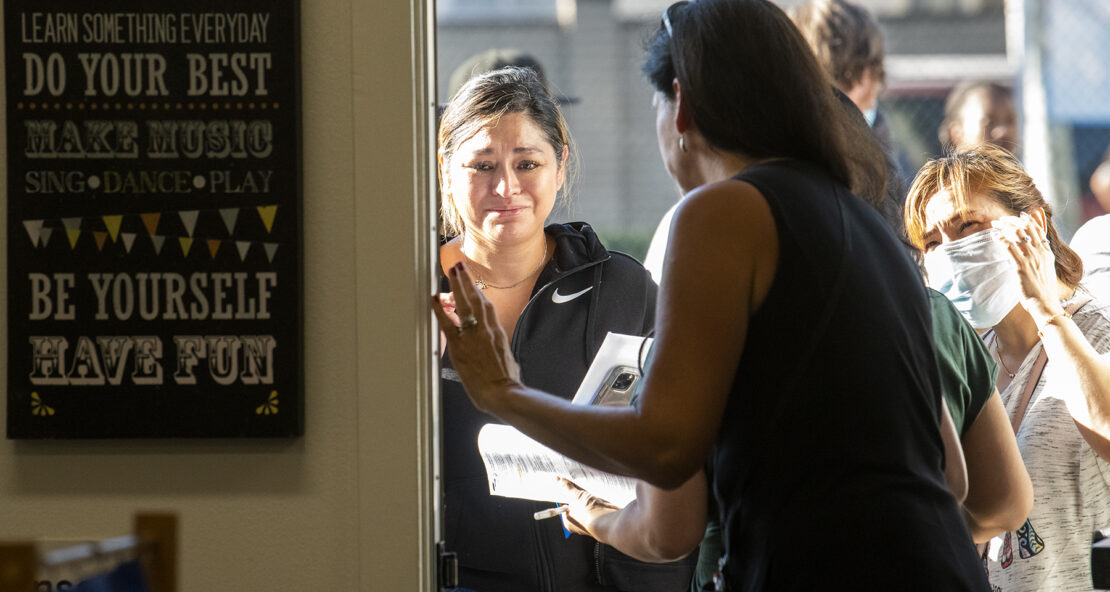 Parents peek into the doorway moments before the teacher closed the door at a kindergarten class during the first day of school at Barton Elementary School. Photo by Thomas R. Cordova.

Baker said the district has had a lot of positive feedback from parents about the full-day kindergarten program and that they might have an increase in kindergarten enrollment in response.

Another big change in the LBUSD is high schools starting later in order to comply with a state law requiring the change. District high schools will start at 8:45 a.m. this year, with middle schools moving to an earlier start time to compensate. Senate Bill 328, which required the change, was passed in order to address sleep deprivation in teenagers.

Jordan Washington and Samiya Stevens, both juniors at Jordan High, said the change won’t make too much of a difference for them. 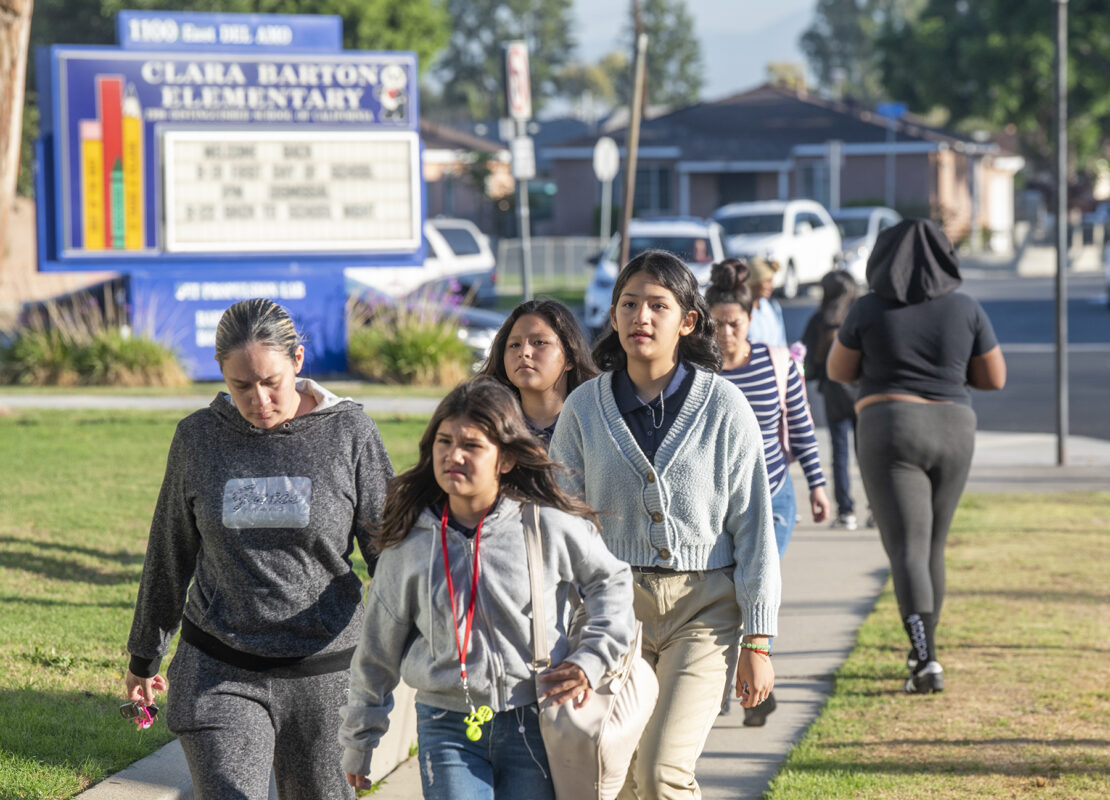 It’s the first day of school as kids and parents arrive at Barton Elementary School. Photo by Thomas R. Cordova.

“For athletes, we still have to be here at 7 a.m. to practice. The only change for me is having lunch be later, which is going to take some time to get used to,” said Washington, a standout track and football athlete for the Panthers.

“I still have track practice so it’s not really different, but I’m definitely worried about being hungry with lunch being later,” said Stevens.

The COVID-19 pandemic may not be over, but there was a strong feeling across the city’s schools that the worst of it is largely in the rearview mirror, with teachers, students, and administrators saying they’re looking forward to what will hopefully be a more normal school year than the last two COVID-affected ones.

“I’m just most excited about seeing my students’ smiles and seeing their excitement, I feel like we’re going back to the old normal,” said Jeannice Colbert, a Barton teacher who’s been in the LBUSD for 17 years. “The last years it’s been hard to tell my students apart because of the masks—being able to be face to face with them and build our relationships and connections … I just can’t wait to see them grow from September to June.”

The LBUSD is recommending but not requiring masking, in line with LA County and Long Beach Health Department guidance. At schools across the city, students and teachers were mostly mask-free to start the school year. 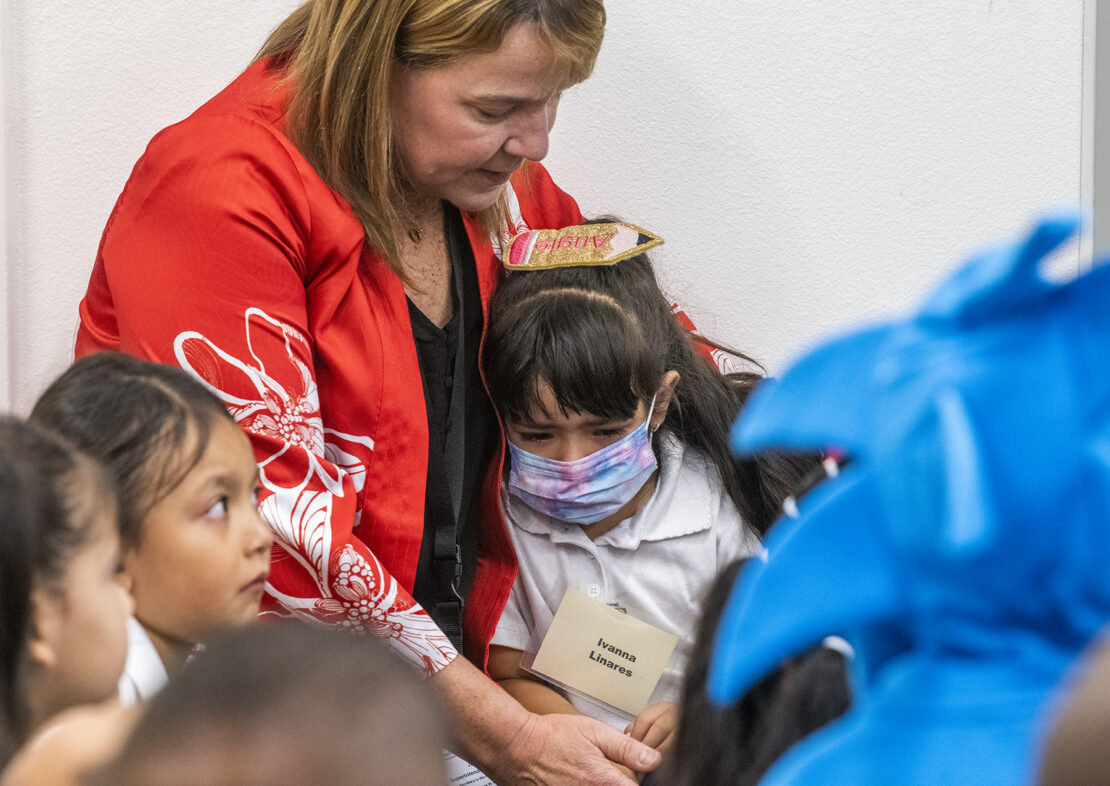 “I just hope the year goes off with no problems. I hope it’s perfect. Hopefully, we don’t have to go through any quarantine stuff again,” said Washington, the Jordan High junior. “We haven’t had a full school year since we were in eighth grade.”

Baker echoed that she’s heard mostly positive things regarding the pandemic to start this school year.

“I want to recognize that the pandemic in some ways is still going on, and we still have protective measures in place,” she said. “But I definitely think that the optimism is because things feel like what school has felt like in the past getting started. So teachers are looking forward to being able to move around their classroom and have students interacting in ways that they remember prior to the pandemic.”

The LBUSD opened Wellness Centers at all of its high schools, and they were well-used and much appreciated by students last year as students dealt with the emotional and academic challenges of the last two years of COVID-19-affected school. 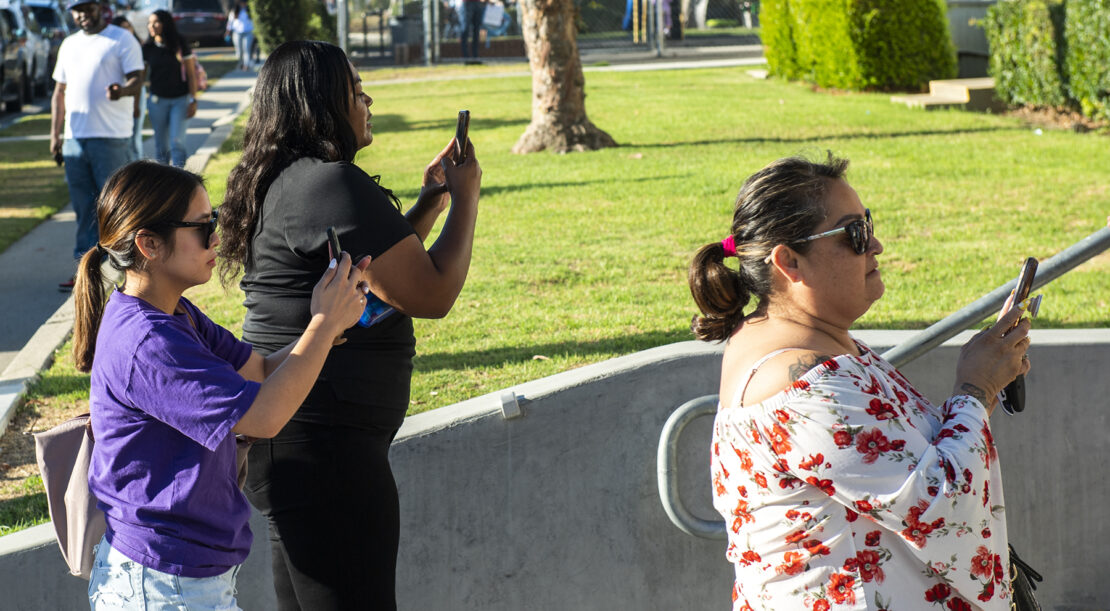 Parents take photos of their children as they drop them off on the first day of school at Barton Elementary School in Long Beach Wednesday, Aug. 31, 2022. Photo by Thomas R. Cordova.

The district has used a chunk of COVID-19 relief aid to add the centers, which will help with additional counseling services and mentorship, as well as basic needs like food and school supplies. In surveying students and families, more emotional and material support was a top priority coming out of the pandemic.