Long Beach on Tuesday issued a new round of restrictions for businesses after the city reported a record surge of 1,264 new cases in roughly a week.

Mayor Robert Garcia in a news conference said statewide restrictions would likely come soon as “spikes and surges are happening all across our nation.” Los Angeles County, which also enacted stricter health orders that went into effect Monday, reached a record 7,593 new cases of COVID-19 on Tuesday and more than 2,300 hospitalizations.

Gov. Gavin Newsom warned Monday that he could be issuing a sweeping stay-at-home order—on the magnitude of the one imposed at the start of the pandemic in March—in hard-hit counties to prevent hospitals from being overrun.

Garcia also noted Newsom’s announcement this week that the state’s intensive care units (including in Long Beach) could pass 100% occupancy in the next few weeks if the current trends continue.

“Were in danger of not having enough ICU capacity for folks come Christmas if things don’t change,” Garcia said.

From Nov. 1 to Dec. 1, the number of COVID patients at five area hospitals has increased from 29 to 149.

“We cannot sustain this for the next 30 days,” he said. 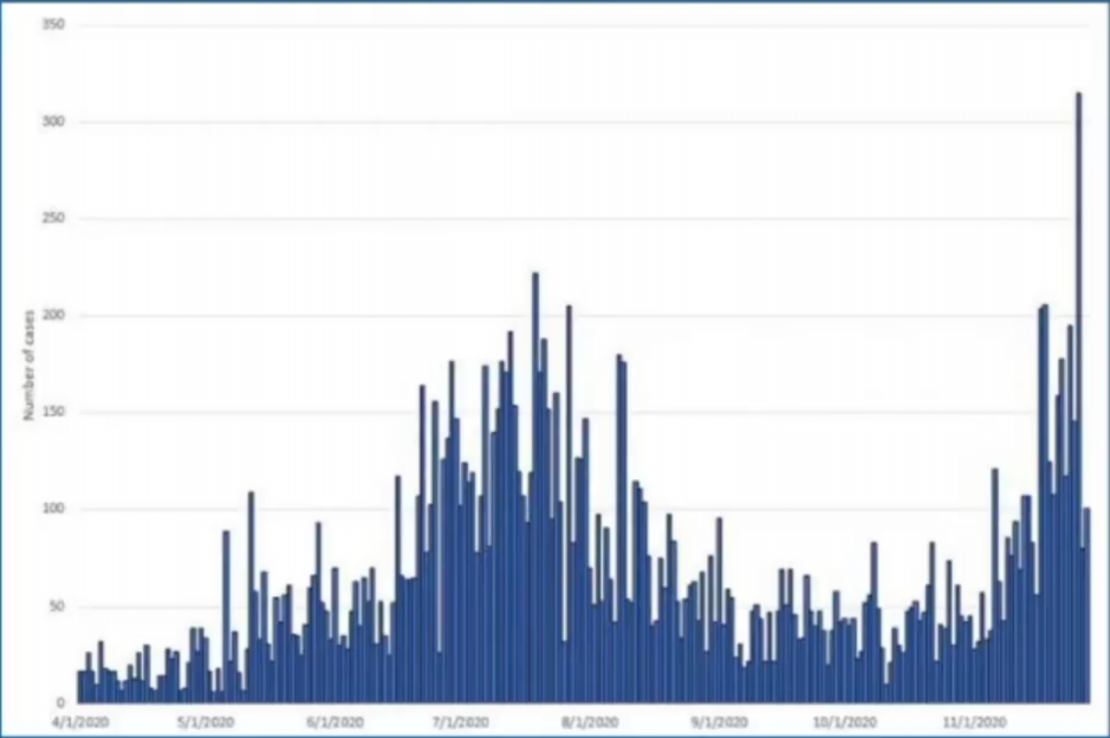 Number of COVID-19 cases per day in Long Beach since the pandemic began in March.

Last week, the city followed LA County in banning outdoor dining in restaurants for at least three week. The move was blasted by local restaurant owners who argue that the city, which has its own health department, should follow in the steps of other cities like Pasadena, that have opted to keeps dining open.

Colopy on Tuesday said she is basing her decisions on case rates, hospitalizations and information from the Centers for Disease Control and Prevention.

“We’re using science to make the decision, pulling from the CDC and other sources to decide where the greatest risk will be,” she said. “We’re focused on keeping people safe.”

The health order, which sets limits on occupancy at businesses and changes to various activities, goes into effect at 12:01 a.m. Wednesday.

The number of cases at long-term care facilities is also on the rise, with eight outbreaks at Long Beach facilities, compared to no reported outbreaks in early November, officials said.

Death rates from COVID have so far remained low, with 277 fatalities reported Tuesday, up from 274 last week. Health officials, however, note that death rates are a “lagging indicator,” meaning those rates could rise over the the next few weeks.

Garcia, who lost both of his parents to COVID, said he’s reluctant to add limits to local businesses, but the priority “must be saving lives.”

“The thing with COVID is that it is a very, very large ship that’s hard to turn around,” he said. “I will support the decisions made by our health professionals and our doctors and nurses.”

Editor’s note: This article has been updated to reflect that the mayor said ICU beds could reach capacity in the next few weeks.