The percentage of people testing positive for COVID-19 is now more than double what it was two weeks ago in both Los Angeles County and Long Beach, a worrisome trend as the state opens up, vaccinations have leveled off and a new variant of the virus has become more prevalent.

The case rate and positivity rate for Long Beach is still low, to be sure—particularly compared to the peak of the pandemic in early- to mid-January. On Jan. 7, the city’s positivity rate was 17.8%.

But the positivity rate in Long Beach doubled from 1% on June 18 to 2.1% on June 29. That rise would have been enough to have put the city in the “orange tier” according to the state’s former system for determining when to enact stricter safety measures. 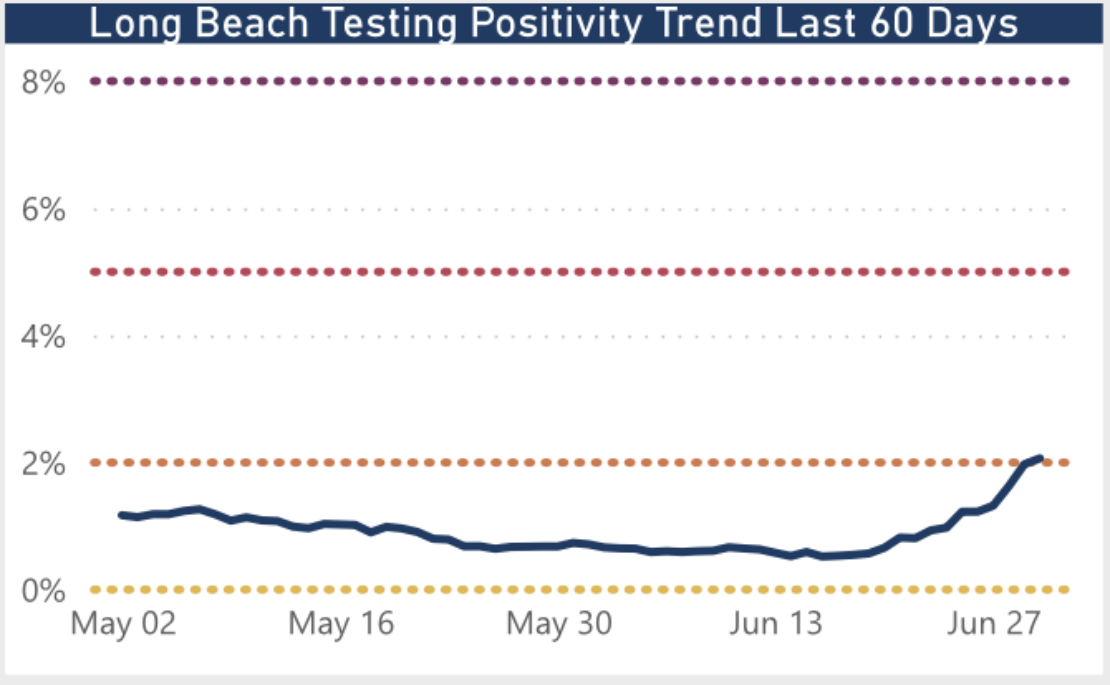 This graph shows the testing positivity rate for COVID-19 in Long Beach over the past 60 days.

In Los Angeles County, 1.2% of people are testing positive for the virus as of Wednesday, compared to .04% on June 12.

County officials have noted in recent weeks that the number of people getting tested has dropped dramatically from the winter surge, and the people who are getting tested are likely doing so because they are experiencing symptoms or were exposed to the virus—contributing to a higher positivity rate.

City officials said they are watching the number closely, but haven’t changed any health guidance at this time.

“We did expect a small bump after June 15 when everything opened up completely, and we are seeing that now,” Jennifer Rice Epstein, a city spokeswoman, said in an email.

The city also reported earlier this week that the delta variant, which is more potent and contagious, has arrived in Long Beach. Rice Epstein said 14 cases have been confirmed in the city, but sequencing isn’t conducted for all COVID-19 cases, so that number is likely higher.

Most of the city’s new cases are among people who are not vaccinated. Those who are unvaccinated also tend to be younger—the 18-34 age group has the second-lowest vaccine rate in the city—and also more likely to be out in groups and in locations where masks are removed, such as restaurants and social events, Rice Epstein said.

Overall, 66% of Long Beach residents over 12 have been vaccinated, a number that hasn’t budged significantly in the last few weeks despite a number of incentives that have been offered.

The state dropped most COVID-19 restrictions on June 15, including no longer mandating masks for those who are vaccinated in most situations.

Last year’s July 4 holiday was blamed for sparking a summer surge in COVID infections, even with most large public fireworks events canceled.

“Last year, we didn’t have the vaccine and there were increases in cases and hospitalizations that occurred after the Fourth of July holiday,” Ferrer said in a statement. “This year we have three powerful vaccines but there are still about 4 million residents that are unvaccinated and at risk of COVID-19 infection.”