More than 200 employees in the Long Beach police and fire departments are isolating or quarantining from COVID-19 this week, but officials said there has so far been no impact to safety response times.

The omicron variant has ripped through the county, sickening hundreds of first responders and leading to concerns about public safety.

The Los Angeles Police Department, which has about 9,500 sworn officers, currently has 505 officers at home quarantining after testing positive for the virus, officials said Thursday.

The Los Angeles Fire Department, with a total of nearly 3,800 employees, has 299 sworn and civilian personnel off-duty due the virus. A few weeks ago, only about 24 employees were off-duty due to COVID-19.

The Long Beach Police Department, which has more than 1,200 personnel, saw 128 employees (including sworn and civilian) in isolation or quarantine on Wednesday, for one of the biggest surges since the start of the pandemic.

Former Long Beach Police Chief Robert Luna, before he retired from the department in December, announced that he had tested positive for COVID-19 and was recovering at home. Luna at the time said he believes his symptoms could have been much worse had he not been vaccinated.

The Long Beach Fire Department has also struggled with outbreaks, with 50 of its employees testing positive within a span of five days last month.

Officials said most of those infections were mild or asymptomatic breakthrough infections, and that the majority of the positive cases were in fully vaccinated fire personnel.

Since Dec. 22, the fire department has seen 150 positive cases in sworn or civilian employees. As of Thursday, 84 employees were isolating or in quarantine, but 15 of those employees were able to come back to work this week after the Centers for Disease Controls shortened the quarantine time frame from 10 to five days.

The city in a statement Wednesday said some services such as trash and street sweeping may be impacted by the number of city workers falling ill, but public safety response times remain unaffected.

The surge of infections for first responders prompted Los Angeles Mayor Eric Garcetti to speak alongside the chiefs of the Los Angeles fire and police departments on Thursday to assure the public that the departments remain at adequate staffing levels, despite hundreds of personnel quarantining at home after testing positive.

Throughout the entire pandemic, a total of 1,475 Los Angeles Fire Department personnel have tested positive for the virus, and the number of personnel off-duty right now is the highest level the department has seen.

“These are big numbers, numbers that are reflecting the staffing challenges that all of us face, whether it’s in the private sector, the public sector and across all of our city departments,” Garcetti said.

Despite the surge in COVID-19 cases across the county and within departments tasked with ensuring public safety, Garcetti said people shouldn’t worry that the police and fire departments are unable to respond to calls for service.

He added that additional precautions are being taken to ensure public safety needs continue to be met, including the authorization of additional overtime funds to pay employees who cover the shifts of personnel sick with COVID-19.

The surge in cases among frontline workers has prompted concerns over vaccine rates for police officers and firefighters and any possible impact to public safety.

Similar to other cities across the region, Long Beach’s police and fire departments have lower vaccination rates compared to other city departments, though they have seen gains in recent months.

About 60% of sworn police officers in Long Beach were fully vaccinated as of Dec. 27, up from 51% in September, according to a city memo. The department, however, still has the lowest vaccination rate of all city departments.

In the fire department, 70% of sworn firefighters are now vaccinated, up from 60% in September. 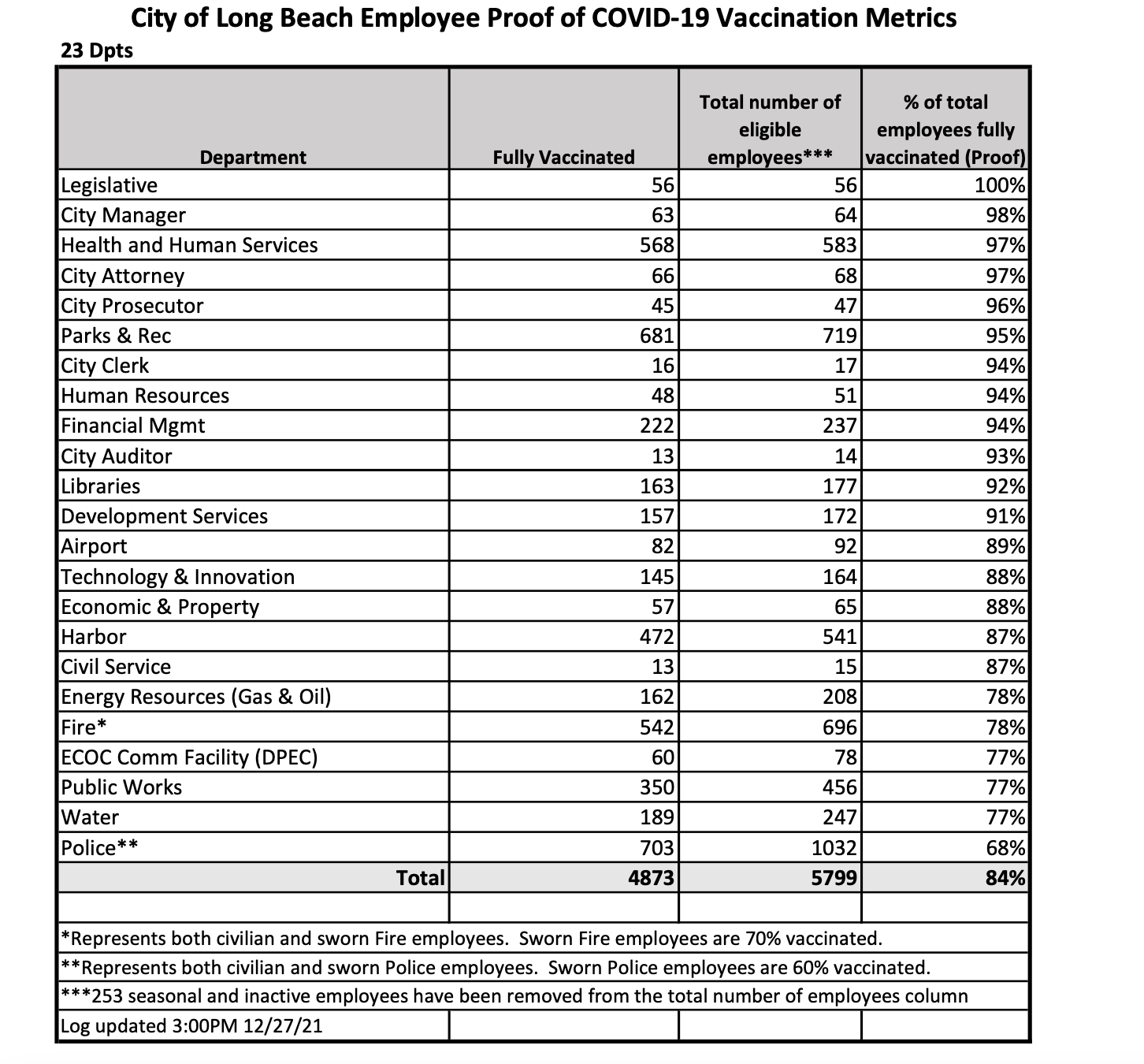 “Our goal is to have a fully vaccinated and healthy workforce,” he said. “I also recognize that in spite of an increase in police department COVID cases, our healthy employees continue coming to work each day to minimize any disruption to service, and ensure the safety of our community.”

The effort to get more city staffers vaccinated comes at Long Beach is planning a vaccine mandate policy for all employees. The policy is pending as the city meets with its labor groups, said city spokesman Kevin Lee.

“We continue to work collaboratively with all labor groups to finalize the proposed policy and conclude the meet and confer process,” he said.

Long Beach Mayor Robert Garcia in a statement said he’s “heartened to see that over half of our city departments are at vaccination rates at or above 90%.”

“Even though we have made great progress since the last report, we must do more to model best practices for our community and get more employees vaccinated,” he said. “I am confident our vaccination numbers will continue to grow.”

However, the city may see pushback from its fire and police unions if it moves forward with a mandatory vaccine policy. Los Angeles has already seen legal challenges from police and firefighters for its vaccine mandates.

Long Beach Police Officers Associate union President Rich Chambers said he supports officers getting the vaccine, but any mandates could lead to a shortage in police officers and more costs to the city.

“We are encouraging city leaders to seriously consider the significant impacts to staffing and community safety that may come if we start terminating police officers over the mandate,” he wrote in an email. “Long Beach PD is already short-staffed and is not currently attracting the number of new applicants we need to fill an academy class with qualified candidates.”

Chambers said the union possibly could take legal action if it believes officers’ rights are violated.

“At this point, that is not the case,” he said. “Rather than filing a lawsuit in an attempt to stop the mandate, we are asking City leaders to look at alternatives that are safe for the public and our employees, but that do not unnecessarily deplete our staffing levels.”

Long Beach Fire union President Rex Pritchard he’s also against vaccine mandates for firefighters. Pritchard noted that more than 70% of firefighters who have been infected recently are fully vaccinated and that firefighters will continue to become infected regardless of their vaccination status.

“We encourage people to get vaccinated, but to terminate people over not getting vaccinated, that doesn’t make any sense to us,” he said.