Los Angeles County reported another 1,635 cases of COVID-19 and four additional deaths Sunday, as the county continues to see a resurgence in the pandemic that has seen local case rates and hospitalizations skyrocket.

It was the 10th consecutive day that at least 1,000 new cases were reported.

Sunday’s figures—which brought the county’s totals to 1,267,860 cases and 24,583 fatalities since the pandemic began—likely reflect reporting delays over the weekend, according to the Los Angeles County Department of Public Health.

The number of people hospitalized in Los Angeles County due to the virus jumped from 507 on Saturday to 528, while the number of those patients in intensive care rose from 103 to 112, according to state figures.

Health officials have attributed the recent spike to the presence of the more infectious delta variant and the intermingling of unmasked individuals where vaccination status is unknown.

A new face-covering mandate went into effect in Los Angeles County at 11:59 p.m. Saturday that requires everyone to wear masks in indoor public spaces regardless of their vaccination status.

Residents in Long Beach were generally supportive of the new measure.

“It doesn’t hurt for us to have them,” said Denise Zepeda, 40, who was at a shopping center Sunday near Third Street and The Promenade in Downtown.

Zepeda is not vaccinated because she said she hasn’t been exposed to COVID-19.

Lalao Sue Ratsaralafy, 74, said that “of course” she agrees with the renewed mask mandate. Even after she stepped outside of the Ross Dress for Less at The Promenade in Downtown, she kept her white, cloth mask on. She said she even has an extra two masks inside of her purse.

“There’s crazy people out there not wearing masks,” Ratsaralafy said. 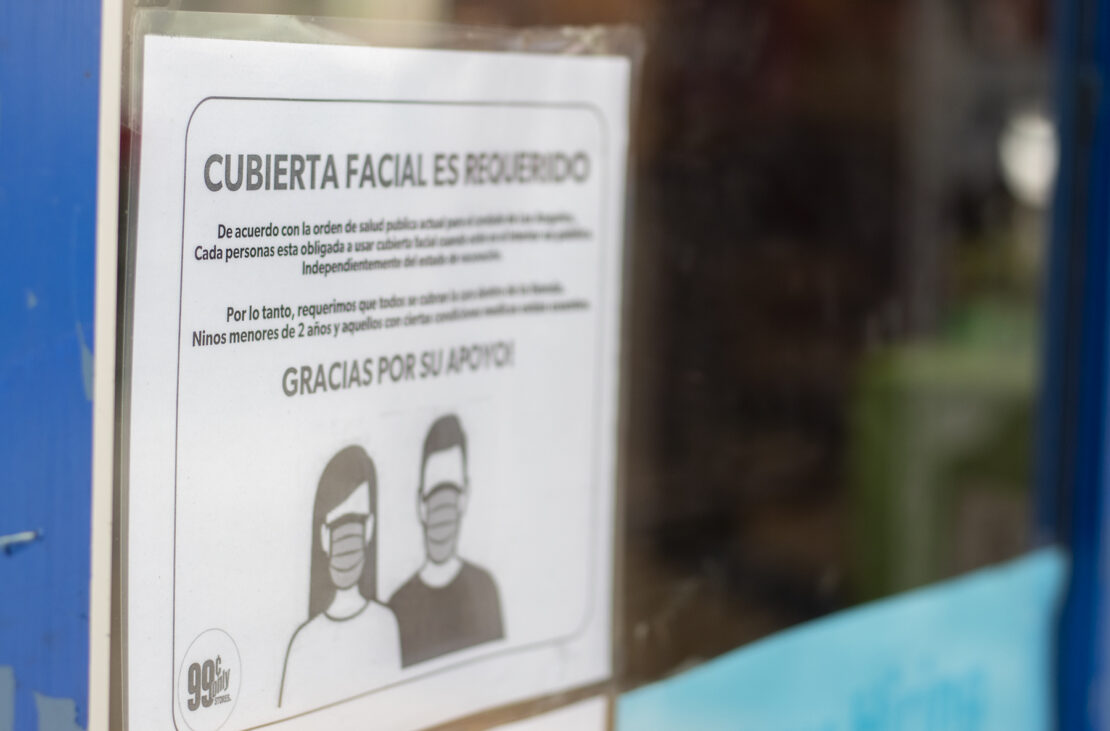 Spanish signage that reads “FACE MASKS REQUIRED” is posted at the entrance door at a 99 Cent Only Store in Long Beach on Sunday, June 18, 2021. Photo by Crystal Niebla.

Not everyone at the county is on board with the new mandate.

Sheriff Alex Villanueva said Friday his deputies will not actively enforce the mask-wearing mandate, insisting his department is under-funded. He also said the requirement for vaccinated people to wear masks “is not backed by science and contradicts the U.S. Centers for Disease Control and Prevention guidelines.”

County Supervisor Kathryn Barger, the lone Republican on the five-member Board of Supervisors, also criticized the mandate for running afoul of federal and state rules on masking. She also said the mask mandate won’t help the county’s efforts “to stress the efficacy of the vaccines and compel unvaccinated residents to get vaccinated.”

Fellow board members Hilda Solis, Janice Hahn and Sheila Kuehl have come out in favor of the mandate.

The masking order will remain in place “until we see improvements” in case transmission, Muntu said.

Asked if the county might consider re-implementing other health restrictions—such as capacity limits and physical distancing, Davis said, “Everything is on the table if things continue to get worse.”

What you need to know about the new mask mandate in Long Beach, LA County