On Saturday, the city of Long Beach released a new dashboard to present data about the spread of coronavirus in the city. Included is a map of cases by ZIP code, which was promptly called into question by 9th District Councilman Rex Richardson.

Richardson said residents of his district were alarmed to see the 90805 ZIP code in North Long Beach highlighted in red—reflecting a higher number of cases than anywhere else in the city. 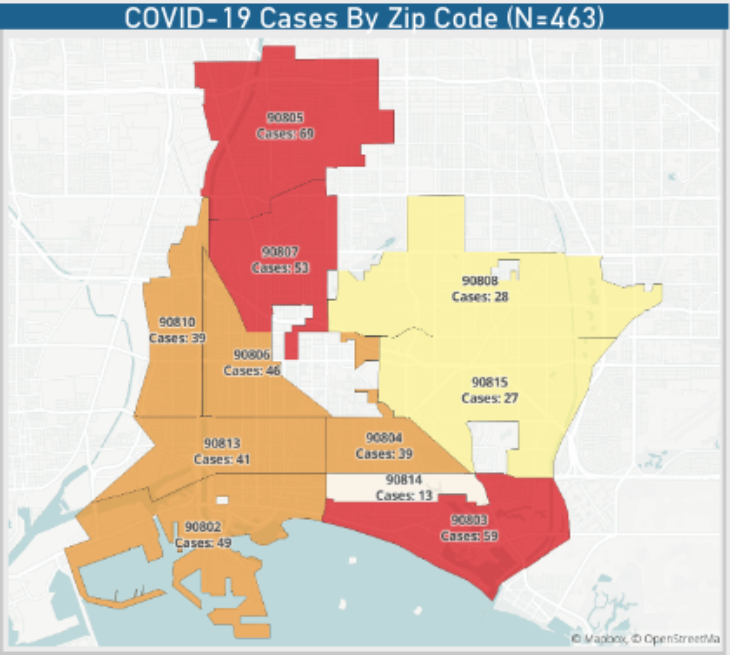 A recently released map shows the total number of COVID-19 cases by ZIP code, highlighting those with the highest number of cases in red. (Map courtesy of the city of Long Beach)

The way the data is currently presented is “misleading,” Richardson said, because it fails to take population size and density into account. Per capita, the populous ZIP code had one of the lowest case rates in the city.

“To simply paint it red, without context, is irresponsible and harmful,” he wrote in a Facebook post.

Richardson emphasized that he didn’t object to the city publishing information on the number of cases per ZIP code, but that a rate of cases per 10,000 residents would be more helpful than raw case numbers.

“During a crisis, the release of geographic data is important for understanding community risk,” Richardson said. “However, the impact of releasing information in the wrong context can be harmful to communities. It heightens anxiety and creates narratives that lead to xenophobia and poor self-image.”

In a press conference on Tuesday, Long Beach Mayor Robert Garcia said the city’s method for visualizing cases by ZIP code is “accurate.” However he agreed density should be taken into consideration, and said city staff is working on an alternative map of case rates by population size that should become available “within the next couple of days.”

Both ZIP codes are home to several nursing homes, which have become a hotspot for coronavirus infections in Long Beach.

Here’s the rate of cases per 10,000 residents in each Long Beach’s ZIP code: