A new park is seemingly in the cards—if still a few years off—for North Long Beach residents living along the 91 Freeway, an area of town lacking in green space.

The Hamilton Loop park is a greenbelt connector set to run along the freeway from Myrtle Avenue to Walnut avenue. Community outreach workshops concluded in November, which included survey sessions where residents advised city planners as to what they would want the park to look like. The project is now moving to the City Council where they can view the community’s desires through the vision plan for the park.

Meredith Reynolds, manager with the city’s Park Planning and Partnerships Bureau, said the City Council could vote on Jan. 19 to extend a use permit with CalTrans—the government entity that owns the land along the freeway. In the meantime, Reynolds’ staff is seeking grants and other methods money to pay for the construction of the park.

A $50,000 grant from Kaiser Permanente was originally used to pay for the community outreach sessions. Reynolds said no money from that grant is left over to fund the actual construction, but she’s confident her team will locate funding.

Negotiations for how much the city should pay CalTrans to use the land are lengthy, and Reynolds anticipates that people won’t see construction around the park for a few more years.

“Definitely one of our communities of color with environmental issues,” Reynolds said. “Parks provide healthy options and help with our community’s health.” 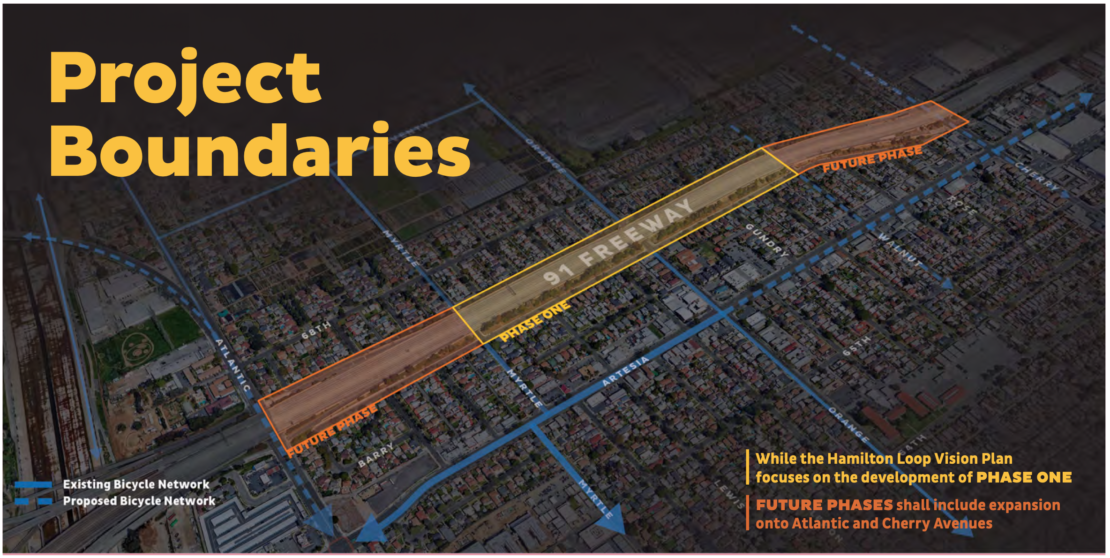 Renderings of the proposed Hamilton Loop park from the Long Beach Vision Plan document. The park will be developed in North Long Beach, with potential plans to expand later on. Courtesy photo City of Long Beach.

Residents in the area have been advocating for green space for years now. Renette Mazza, managing board member for the Hamilton Neighborhood Association, said efforts to lobby for a park began in 2015.

“We looked at the area and decided this would be a good place for a park,” Mazza said. In 2018, there was a push from the city to develop green space in the area.

“We saw that as the opportunity to rally support,” she said.

Small community-run pocket parks and gardens began popping up along the freeway as an example of what could be developed. After listening to their needs, the city pushed forward with a project that residents had envisioned.

Both Mazza and Reynolds noted that CalTrans’ upcoming plan to expand the 91 Freeway could benefit the development of the park. Reynolds said any movement of brush and fencing could speed up the process later down the road when crews begin working on the project. Mazza said that while there is some pushback from nearby residents against the freeway expansion, she believes the benefits are worth it.

“Although no one wants to see the freeway expansion, the tradeoff is worth it,” Mazza said.

As electric cars begin phasing onto state roads in 2035, Mazza hopes this will reduce vehicle emissions. The anticipated addition of park enhancements, such as new lighting, bike paths and walkways, will help keep the area safer, Mazza said. Currently, the slopes along the freeway are dilapidated with blight, which welcome people to camp near the freeway.

“Right now, the area is not kept up and it’s a bit of an eyesore,” Mazza said. “If it turns into a park, then it will be maintained better.”