It’s been a tumultuous few years in California, with record wildfire seasons, a worsening drought and a wave of smash-and-grab retail theft amid a coronavirus pandemic that just won’t seem to end.

But when it comes to the state’s finances, things are looking up. Way up. Tens of billions of dollars up.

On Monday, Gov. Gavin Newsom unveiled a $286.4 billion budget proposal, 9% bigger than last year’s record state spending plan. Buoyed by a strong economic recovery and tax revenues that continue to roll in even higher than anticipated, his administration projects a $21 billion discretionary surplus for 2022-23, plus tens of billions more in extra cash for schools, pension payments and reserve accounts.

As he enters a reelection campaign, Newsom is taking advantage of California’s unprecedented fiscal health to shift into crisis management mode. At a nearly three-hour press conference, he emphasized an agenda tackling what he characterized as the “greatest existential threats” facing the state—COVID-19, climate change and homelessness among them—while also sprinkling in some priorities, including an expansion of health care for undocumented immigrants, long sought by liberal supporters.

The governor’s framework is just the opening bid in negotiations with the Legislature, which must pass a budget by June 15 in order to get paid—though the details are not worked out until well into the summer some years. A final deal could look significantly different from Newsom’s proposal once lawmakers have their say, but the early response Monday from the Democratic majority was largely positive. Senate leader Toni Atkins said the governor’s plan aligned with her goal of helping the neediest Californians.

Revenue projections, which administration officials said were calculated in December before the omicron variant sent COVID-19 cases surging again, could also change dramatically by May, when Newsom must submit a revised budget proposal.

Some pieces of his plan, including money to combat retail theft, were unveiled early as Newsom tried to stay on top of mounting political pressure. Following a series of brazen group robberies at malls and stores in numerous California cities last fall, Newsom announced in December that he would propose more than $300 million in funding to put police outside businesses and to investigate and prosecute organized crime rings.

Here are other key areas from the governor’s budget proposal:

COVID-19 returns to the forefront

That latest pandemic surge was top of mind in Newsom’s spending plan. Administration officials rolled out a $2.7 billion proposal for pandemic response over the weekend, ahead of the official announcement on Monday.

Newsom wants the Legislature to act quickly to approve about half of the money as emergency assistance in the current fiscal year, to help overloaded hospitals hire additional staff and to expand testing and vaccination capacity. He also said he is in discussion with legislative leaders to bring back a supplemental paid sick leave program for workers who test positive for COVID-19, after allowing a previous version to expire last fall. 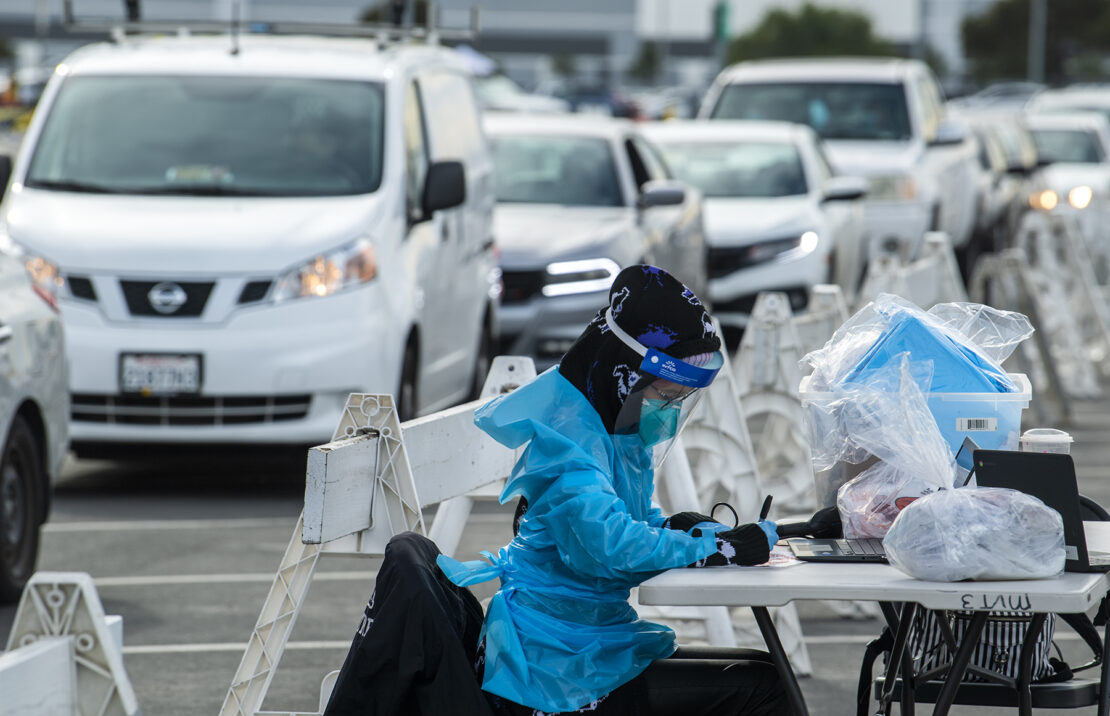 Potentially fulfilling a nearly decade-long push by activists, Newsom said he is ready to expand access to Medi-Cal, the state’s health insurance program for the poor, to all California residents regardless of immigration status. The state has already opened Medi-Cal to undocumented residents until they turn 26 and once they turn 50, but making the program universally available would be a first nationwide. The expansion would take effect in 2024 and cover about 700,000 more people, at a cost of about $2.2 billion per year.

Though he campaigned on the issue in 2018, Newsom was less willing to discuss a measure introduced in the Legislature last week that would transition California to a single-payer health care system, entirely publicly-funded and managed by the government.

“I have not had the opportunity to read that plan and no one has presented it to me,” he said.

Will taxpayers get some money back?

State tax collection has been so robust that California may, for the first time in decades, exceed a constitutionally-mandated spending cap, above which any remaining money is split between schools and taxpayer rebates.

Newsom said his administration currently estimates the budget will be about $2.6 billion higher than that limit in the coming fiscal year, though the number is expected to change when revised revenue projections are released in May. As a result, the governor held off on any proposals similar to the stimulus checks that the state sent to low- and middle-income households last year, though he said: “There likely will be substantial contributions back to the taxpayers.”

More immediate relief may come this summer at the pump. With gas prices climbing, Newsom proposed to forgo the annual increase to a fuel excise tax that would take effect in July, potentially lowering costs for drivers. That money—an estimated $523 million to fund state and local road repairs and other transportation projects—could be replaced from another source.

After another devastating year left millions of acres scorched across California, Newsom is again proposing to scale up the response to what has become one of the most vexing products of climate change for the state: a nearly year-round wildfire season.

The governor’s spending plan includes an additional $1.2 billion over two years for programs to increase forest thinning, build fuel breaks, and help homeowners and fire-prone communities retrofit structures and improve defensible space. CalFire—whose budget has grown by more than $1.5 billion over the past three years—would receive another $248 million for new planes, crews and equipment.

The state has already committed to spending $5.2 billion over three years to deal with the ongoing drought. But after some major reservoirs dropped to their lowest levels ever last fall, Newsom is seeking to add $750 million more for water conservation programs, financial assistance for water agencies and grants for farmers to modify their operations. 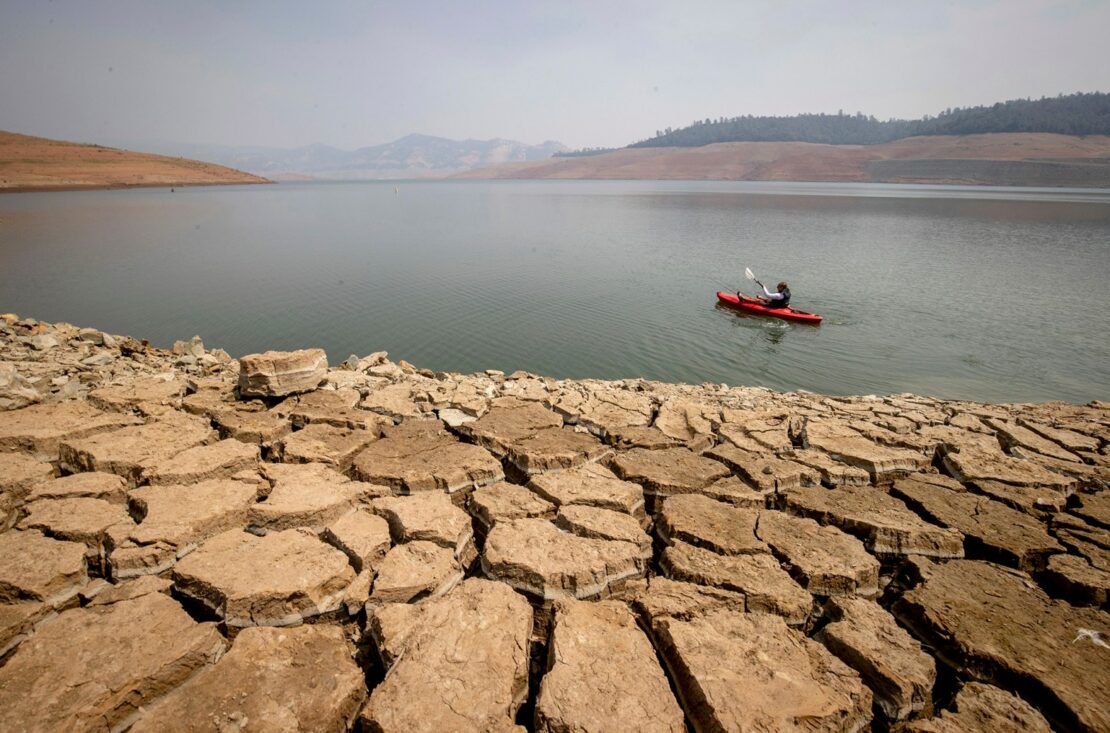 A kayaker fishes in Lake Oroville as water levels remained low due to continuing drought conditions in California on Aug. 22, 2021. AP Photo/Ethan Swope

Looking for climate solutions in a state where the transportation sector is now the largest source of greenhouse gas emissions, the governor has gone all-in on zero-emission vehicles. Newsom signed an executive order in 2020 to phase out the sale of new gas-powered cars and passenger trucks by 2035. His budget proposal on Monday included nearly $6.1 billion to accelerate the transition to cleaner vehicles, with a focus on school buses and commercial trucks.

“We believe this is the future,” he said. “If we don’t invest in the future, we’re not going to do very well there.”

Though Newsom has made homelessness a central focus of his first three years in office, the entrenched and growing crisis—more visible than ever after the pandemic pushed many Californians into housing instability—is a frequent source of criticism for his opponents. Those who tried unsuccessfully last year to recall the governor pointed to it as one of his greatest failures, while Republican lawmakers have urged him to call a special session to directly confront the issue.

Newsom’s budget proposal on Monday included another $2 billion to build on what has been one of his most notable recent policy successes: distributing grants to local governments to quickly convert vacant hotels, motels and other buildings into thousands of units of supportive housing for homeless people. His plan would spend $1.5 billion over the next two years to provide tiny homes and other interim housing as a bridge while more of the permanent units are completed, plus $500 million to help local officials clear encampments. 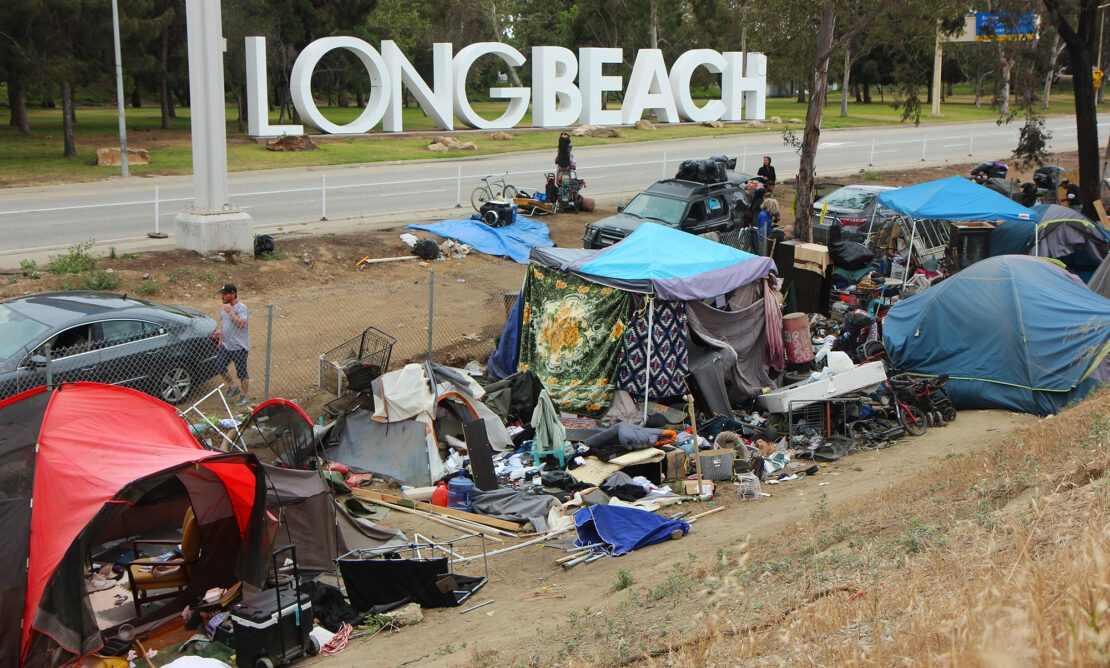 Hundreds of unhoused people packed up their belongings as public officials began clearing out a large encampment near Downtown Long Beach, Monday, May 17, 2021. Photo by Brandon Richardson.

“What’s happening on the streets and sidewalks in our state is unacceptable,” said Newsom, who hinted that he would also pursue legislation this year to strengthen a law that allows officials to force people into treatment if they cannot care for themselves. While these conservatorships are a controversial approach among advocates, Newsom said they can be necessary in cases of severe mental health or substance abuse problems.

“We’re not satisfied with the status quo, in terms of the tools in our tool kit to help people that are struggling and are putting themselves in harm’s way,” he said. “I don’t want to see any more people die on the streets and call that compassion.”

Newsom’s proposed spending includes a record $119 billion for K-12 schools—nearly the size of the entire state budget a decade ago—but some local districts are still sounding the alarm about a looming fiscal cliff stemming from plummeting enrollment and attendance.

The governor aims to avert this potential calamity by giving districts more flexibility in how they report their average daily attendance, which the state uses to determine their funding. Under Newsom’s proposal, schools could use whatever is highest among the previous year’s attendance, the current year’s or an average of the three most recent years.

“It’s a better option than the sudden drop,” said Harold Sullins, an associate superintendent at San Bernardino City Unified. “The only challenge I see with averaging it is you’re still going to see a very significant decline in funding.”

The budget would also provide $54 million to help districts recruit teachers, including by waiving examination and credentialing fees. Amid the spread of the omicron variant, staffing shortages across the state threaten school closures in some districts.

With a new goal of ensuring 70% of working-age adults receive some type of college credential by 2030—up from 52% in 2019, according to one measure—Newsom’s budget proposal envisions a five-year plan to dramatically expand in-state enrollment at the University of California and California State University.

The state would provide money this year to add room for 9,400 more California students at CSU and 7,100 at UC, where some would take slots normally reserved for out-of-state applicants.

Then over the next four years, each system would get a 5% annual funding increase if they meet key targets, including expanding in-state enrollment by another 1%, increasing graduation rates and closing student equity gaps across racial and economic groups. By the 2026-27 academic year, that would mean another 7,000 California students at UC and 14,000 at CSU.

Assemblymember Phil Ting, a San Francisco Democrat who leads the Assembly budget committee, said he welcomes tying increased funding to even greater California enrollment, which has been a major priority for Democrats in the Legislature.

Continued decline in enrollment will mean a tighter budget next year, LBUSD says