Although thousands of people attend Long Beach Meditation, both in-person and virtually, in some ways, the organization still feels a bit like a best-kept secret.

The center, founded in 1993 and incorporated as a nonprofit in 2010, isn’t aspiring to expand nationwide. It instead maintains its roots and unique identity in Long Beach, according to operations manager Travis Ott-Conn.

“As far as us fitting in here …  it’s just such a beautiful little community,” he said.

Meditation is able to bring about a unique level of connection, said Ott-Conn, who has been with the organization since 2013.

“I went to a memorial service recently for a longtime attendee who passed away during COVID, and when I got to tell everyone about him, I realized even though I had known him for five years, a lot of our experiences together were silent,” said Ott-Conn.

Although Ott-Conn had known this member for years and held a lot of affection for him, he found out during the service he didn’t even know his correct first name.

“He had a nickname; I thought that was his name,” said Ott-Conn. “But we knew each other on a certain level, and we had a closeness even if it wasn’t verbal. …  It cultivates a different kind of relationship, based around quiet and peace and shared action.” 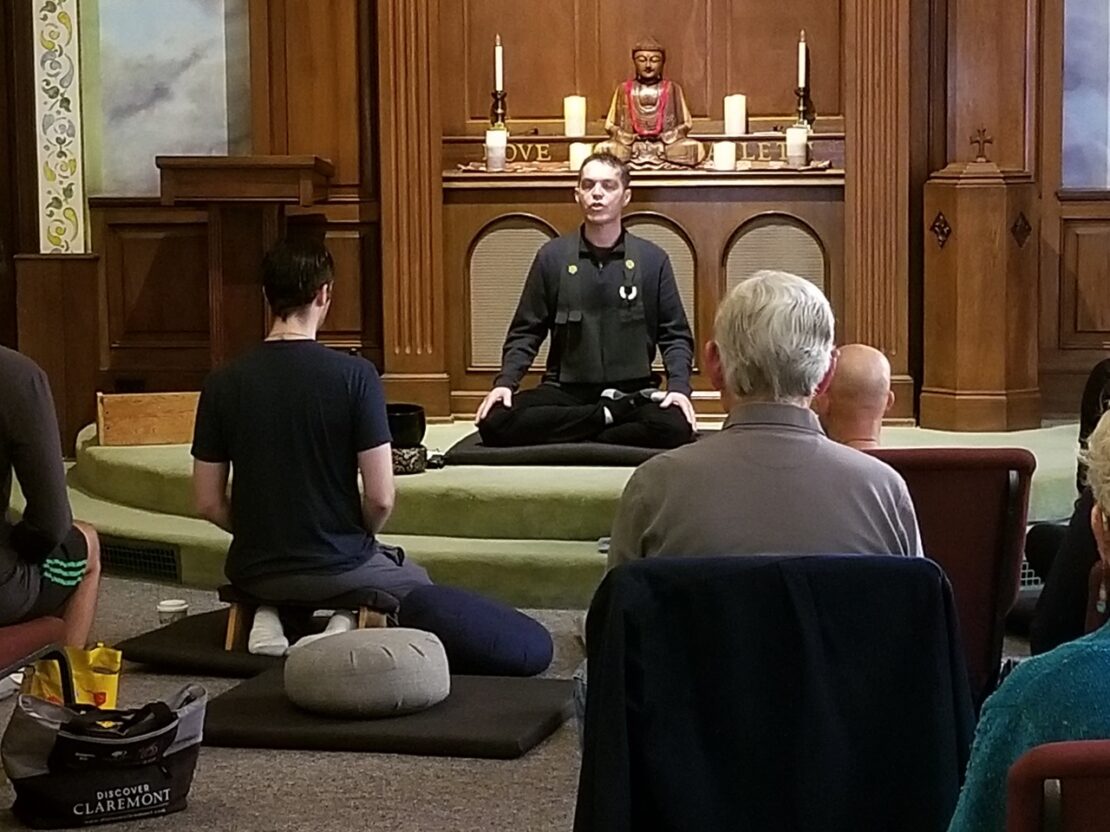 “It could be a divorce or a death or a midlife crisis or financial problems, something that’s making their stress level sky high and it’s something they are having trouble managing,” said Ott-Conn. “Because of that, they seek out meditation.”

Meditation doesn’t create magical powers, nor is it the bandaid solution many people think it is, explained Ott-Conn.

Despite many people’s perceptions of meditation, it isn’t even difficult.

While there is some effort involved, especially in the beginning, “in some cases, it’s like 95% rest,” said Ott-Conn.

But for those in need of solace and a way to quiet their minds amid turbulent times, entering a meditative space can be “like getting a cool glass of water on a hot day,” said Ott-Conn. “It soothes out the stress factor. It seems to make people more responsive and less reactive. I know I can relate to that a lot.”

As life has slowly become more demanding, meditation is a way to reset and allow the body and mind to become still, said guiding teacher Jokai Blackwell Roshi.

“We can find a little bit of peace within the storm,” she said. “We can find more quiet, and we can begin to calm down and to return and find a more centered approach to life, and what’s possible in meditation is infinitely broad as well.” 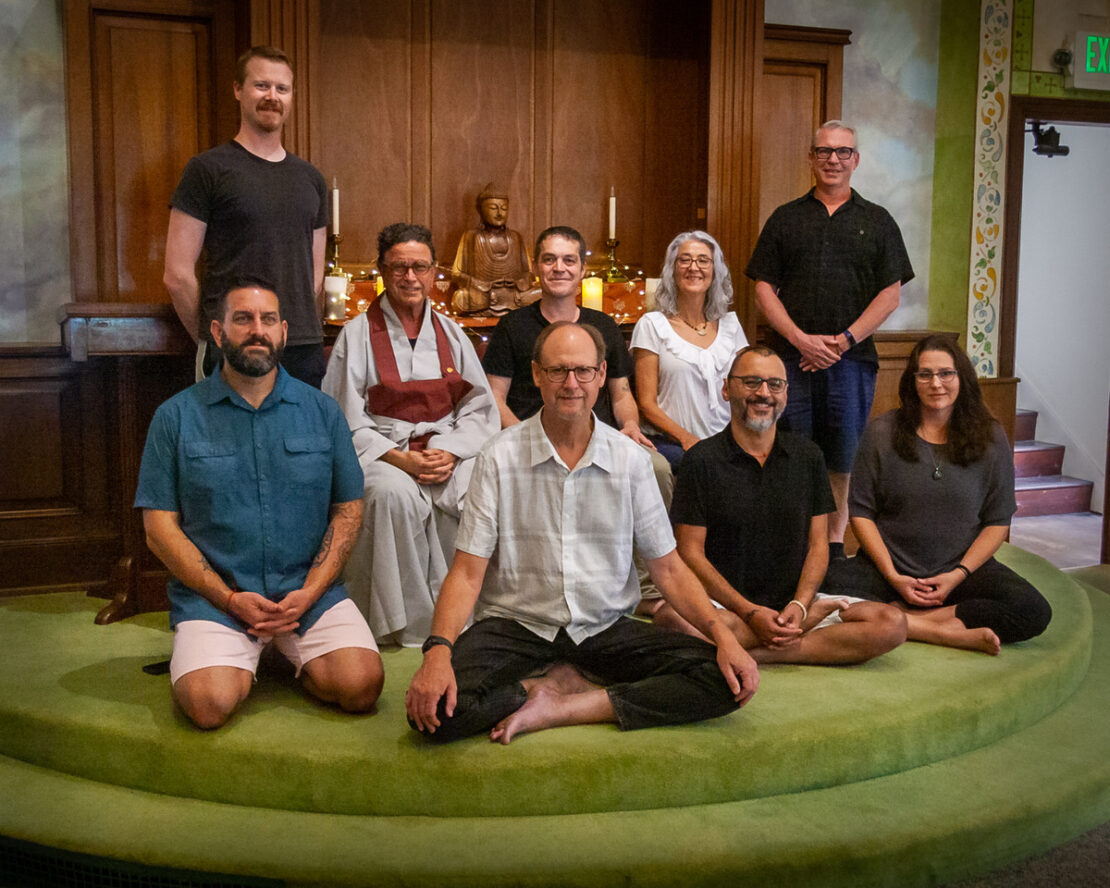 “As a Dharma teacher and as a Buddhist teacher, I always consider myself a link in a very long chain between many people who have been very dedicated and gone before me, and now it’s in my hands, and then eventually, that will hopefully be passed in good condition to somebody to take it forward into the future,” said Blackwell Roshi.

Blackwell Roshi’s path towards meditation began when he was in his 20s, and living in the United Kingdom, where he is from.

“I had a regular job and a house, but I felt like there was something missing,” said Blackwell Roshi. “I just felt a curiosity and a mystery about life.”

While reading about quantum mechanics and cosmology, Blackwell Roshi’s interest in Zen Buddhism blossomed. Eventually, he moved to California in 2002 to study further in a residential program.

A few years later, he took on the role of teacher, an expertise that he now brings to Long Beach Meditation participants.

However, Long Beach Meditation does not focus primarily on Zen Buddhism. Instead, it offers its own organically formed style, an eclectic mix of Buddhist traditions, including Korean, Tibetan, Japanese and American influences.

“It’s a real dharma melt in terms of meditation styles and teachings,” said Blackwell Roshi. “It’s guiding that along and not having too fixed an idea about what we want it to become, but taking care of it as it is, keeping the foundation strong and our intention strong. … If we do that, we’ll be in good shape to meet whatever circumstances come to us.”

For those interested in exploring meditation further, it can be as simple as dipping a toe in, said Blackwell Roshi.

“Keep your eyes open, give it a try, and if you find that it speaks to you, then you can go further,” he said.

While most regular sessions have a suggested donation of $15, no one is turned away for lack of funds.

“That’s one of the really unique parts of it,” said Ott-Conn. “It’s hard to find a place that’s welcoming and friendly and quiet and teaching you something worthwhile and not demanding a big check, and that you can just go and rest.”

Retreats are also periodically offered, for $50, with an upcoming session with Blackwell Roshi on May 28.

“As far as the broader culture that we’re in, that’s a rarity, that’s a precious fruit that needs to be nurtured,” said Ott-Conn. “We’ve got this little garden and we’re just tending to it day by day and getting some help from the community and just little by little trying to trying to coax it into something beautiful.”

Long Beach Meditation is seeking volunteers for numerous roles such as helping with set-up before sessions, assisting with online equipment, taking photos, updating the organization’s website, or copywriting. To get involved, email [email protected].