The Long Beach Unified Board of Education on Tuesday heard recommendations from a community group about how the district can reimagine its school safety apparatus in an effort to make students feel more secure while they’re learning.

The Safer LBUSD Campaign has been working for the past year to explore ways for the school district to reshape its safety practices, an effort that was re-initiated after 18-year-old Mona Rodriguez was shot and killed by a school safety officer last September. 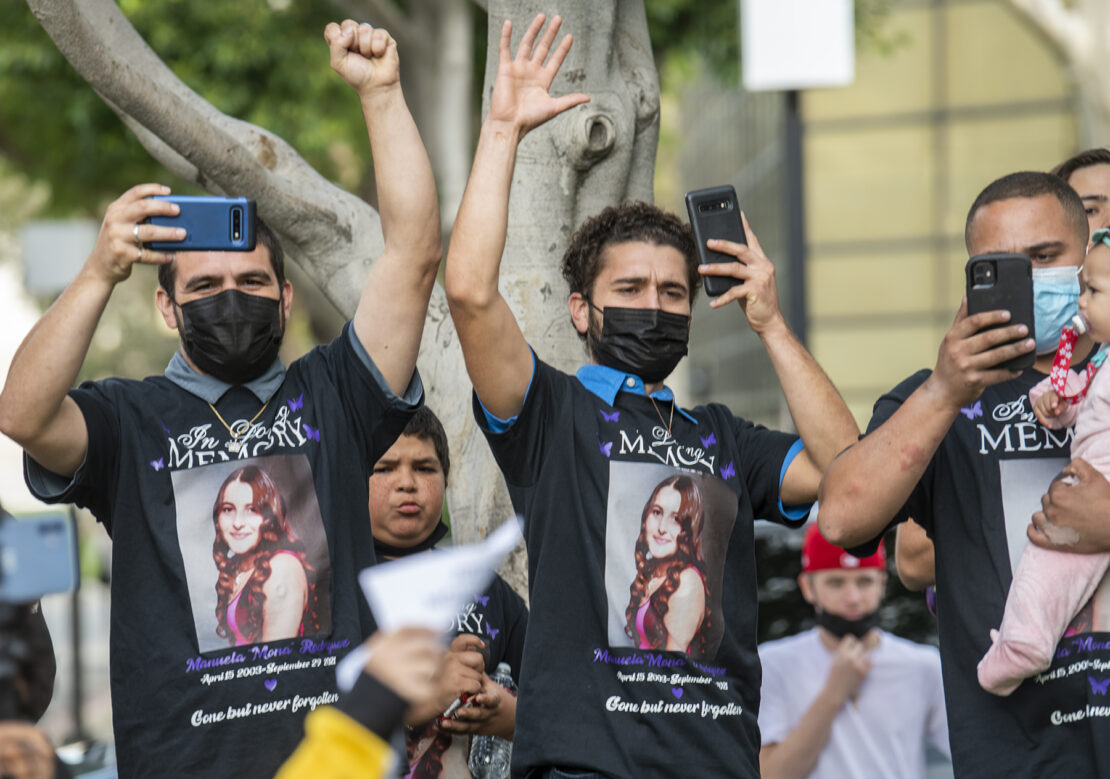 Iran and Oscar Rodriguez celebrate outside of the Long Beach Unified School District office after the district announced it had fired the school safety officer who fatally shot their sister Mona Rodriguez in Long Beach Wednesday, October 7, 2021. Photo by Thomas R. Cordova.

At a special meeting Tuesday, the group shared its research as part of a joint presentation to the board alongside Deputy Superintendent Tiffany Brown who highlighted some changes the district has already made.

The Safer LBUSD Campaign’s findings were laid out by Nooshin Valizadeh, a professor at USC and UCLA with expertise in racial equity, diversity and inclusion in educational settings. She said the group used a combination of national research on school safety coupled with feedback from focus groups conducted locally with LBUSD teachers, parents, students and staff. Much of that research focused on police presence at schools and how it impacts student safety and campus culture.

“What the research has shown across the nation about school safety is that more police do not equal more perceived safety,” Valizadeh said. “So anyone who thinks police being on campuses provide a much safer perception, it’s actually not true. More police presence means more police involvement in lower-level offenses.”

According to Valizadeh, some of these more routine interactions with students would be better suited to mentors, teachers or other personnel on campus who’ve developed a rapport with students, rather than police officers or school safety officers, which are armed guards employed by the district who undergo police training but have limited peace-officer powers. Having a police presence on campus, Valizadeh argued, creates a “culture of policing” which moves adults on campus away from mentorship and forming more positive connections with students.

“Relationships with adults have the most positive impact on the school climate,” Valizadeh continued. “Leading to more feelings of student belonging, better success outcomes, better wellness, and just overall feeling of community and family environment on campus.”

Some changes that have already taken place include the addition of wellness centers on high school and middle school campuses, which focus on supporting the mental health needs of students, plus the creation of a crisis mental health team. Additionally, the district is utilizing new software in the current school year that tracks all calls to school safety, allowing the LBUSD to better sort and analyze that data.

Tuesday’s presentation also included recommendations for the school board to consider going forward. Kim Tabari, who is the Organizational Development Director at the USC Equity Research Institute, laid out some of those recommendations to the board. The campaign’s “North Star,” as Tabari put it, was to “Abolish policing practices and weapons from the district, its employees and partners.”

Christopher Covington, one of the leads for the Safer LBUSD Campaign and longtime proponent of restorative justice on school campuses, went into detail about the panel’s recommendations to the board. Those recommendations included increased training for administrators, more investment in therapists and social workers on school sites, as well as a thorough examination of the roles that school safety officers play in the district.

“Some specific strategies to work toward our goal of abolishing these policies that are negatively impacting our students, is having surveys on the possibility of removing the weapons from school safety officers,” Covington said. “As well as having conversations and surveys around what is the need for school safety officers on campus and could we replace them with other trained professionals on campus.”

As Brown pointed out during the session, student feedback has been a central piece of the school safety conversation as the district examines changes to its current procedures.

“We continue to seek student input on all things, and certainly issues that pertain to student safety,” said Brown. “We view students as our customers, and something that in the last few years has felt critically important to the way we plan, the way we design what we’re doing, and how we evaluate what we’re doing, is to gather input from the student experience.”

If the school board wishes to act on any of the recommendations, they’d have to agendize a vote at a future meeting.