The major storm that hit California this week brought large surfs and high tides that closed beaches, caused flooding and brought a rare sight to the Long Beach Peninsula: surfers.

Every so often, locals say, if the waves are big enough and the angle is just right, swells manage to creep their way through gaps in the Long Beach breakwater and roll into the shore.

Some call it a novelty. Others say it’s like seeing a unicorn. But on Friday morning after the “bomb cyclone” storm had made its way through the region, about a dozen surfers took advantage.

“It’s Belmont Shore, it never breaks. So it’s kind of a novelty wave,” said Jeremy Labreau, 34. “It’s just worth it to get out and catch a wave and say you’ve stood up on a wave in Long Beach.”

James Davis walks out of the ocean after a morning of surfing, as a recent storm brought large swells to the Peninsula in Long Beach Friday, Jan. 6, 2023. Photo by Thomas R. Cordova.

A surfer for 22 years, Labreau had always heard of the waves breaking in Long Beach after a certain swell, but he never saw it for himself until Friday, when he traveled from Corona to experience it for the very first time.

This week, the National Weather Service issued a high surf warning and a high surf advisory that was in effect for Long Beach for most of the day Friday.

Officials warned that waves of up to 13 feet could hit the Catalina and Santa Barbara islands, the Malibu coast and LA County beaches, along with dangerous rip currents. Nearby Seal Beach Pier was temporarily closed, officials announced Friday, due to damage caused by the high surf and winds.

The waves in Long Beach weren’t nearly as intense though, said Todd Morris, 44, a local surfer and barber.

A surfer grabs some air as he rides a wave after a recent storm brought large swells to the Peninsula in Long Beach Friday, Jan. 6, 2023. Photo by Thomas R. Cordova.

After spending an hour in the water, Morris came out beaming with excitement. “Surfing in Long Beach, what else could you say? You gotta enjoy it, take advantage. It’s a blessing.”

Once known as the “Waikiki of Southern California,” Long Beach used to be renowned for its waves, before the breakwater was constructed in 1949 to protect U.S. Navy vessels. The breakwater worked as intended and blocked the waves from reaching the shore—taking the surfers with it.

Todd Morris rides a wave as the Long Beach International Gateway Bridge is seen in the background after a recent storm on Friday, Jan. 6, 2023. Photo by Thomas R. Cordova.

For over a decade, surfing enthusiasts led a campaign to tear down parts of the breakwater to bring waves back to the coast. The campaign had such an impact that the city signed an agreement with the U.S. Army Corps of Engineers to look at the feasibility of potential alterations to the city’s breakwater.

Ultimately, however, it was determined that any changes to it would be unfeasible, dangerous and could cost nearly $1 billion.

Despite the beauty and excitement of catching a wave on the Long Beach coast, city officials still advise residents to stay away from beaches for at least 72 hours after rainfall ends as bacterial levels rise significantly during and after rainstorms.

A surfer rides a wave as a recent storm brought large swells to the Peninsula in Long Beach Friday, Jan. 6, 2023. Photo by Thomas R. Cordova.

Homes along the Peninsula line the beach as a surfer walks out of the water. Photo by Thomas R. Cordova. 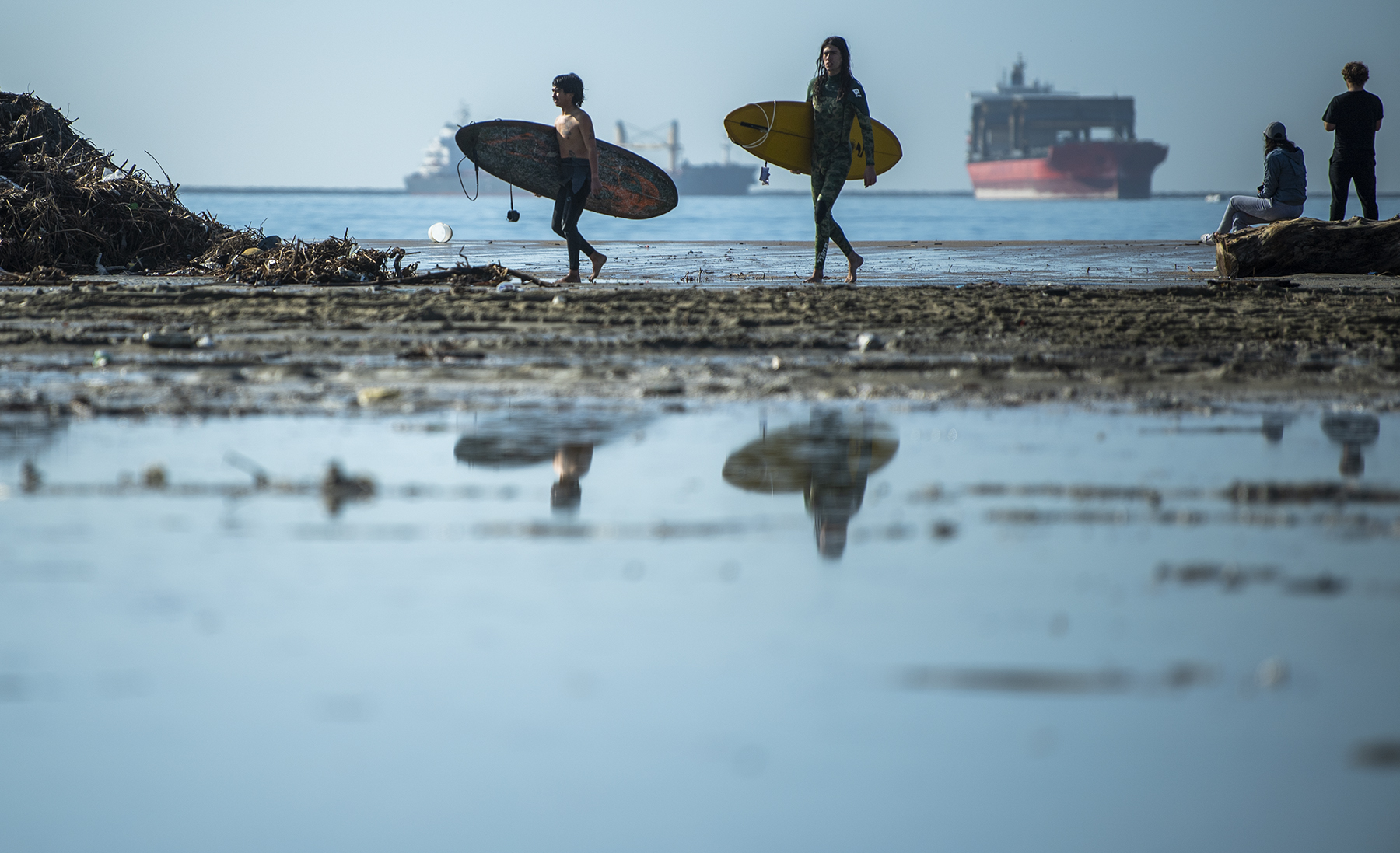 Jagger Salisbury, right, and his friend call it a morning as they walk back to his car after a morning of surfing. Photo by Thomas R. Cordova.