Motels were fun while they lasted. In the years following World War II when automobiles became readily accessible and relatively affordable, families frequently took to the road for their vacations, stopping at motels along the way. Major highways favored by vacationers, such as Route 66 and Highway 101, were lined with mom-and-pop motels, where you could park directly in front of your room to easily unload the car and keep an eye on it during your stay.

Eventually, motels began to disappear as major interstates were built bypassing the smaller highways and their towns with vacationers taking a preference for hotels with nicer rooms, more amenities and easy access to the freeways to continue their journey. According to ​​”No Vacancy: The Rise, Demise, and Reprise of America’s Motels,” in 1964 there were 61,000 motels in the country; by 2012 the number had dwindled to 16,000—and those are divided between kitschy vintage places like Route 66’s Wig Wam Motel in San Bernardino, or run-down places that often get really creepy reviews online.

One of Long Beach’s more beloved and enduring motels was the Beach & Oceanaire Motel on Ocean Boulevard in Belmont Shore. It was built in 1938 by a Texan named Merle Key Guertin, a direct descendant a few nephews removed, of anthem-penner Francis Scott Key.

The motel, built in the still-sparsely populated Belmont Shore, was opened in 1938 as a 10-room motel with rates set at $5 a night and was favored by inlanders looking to spend a week or two at the seashore, along with Midwesterners seeking some relief from either the bitter winters or punishig summers of their home states.

In 1953, by which time the public’s enthusiasm for motel vacationing was in full swing, Guertin put in a swimming pool and added a second floor with an additional 15 rooms. The last expansion came in 1969 when the motel added a building behind the main motel, increasing the occupancy to 30. 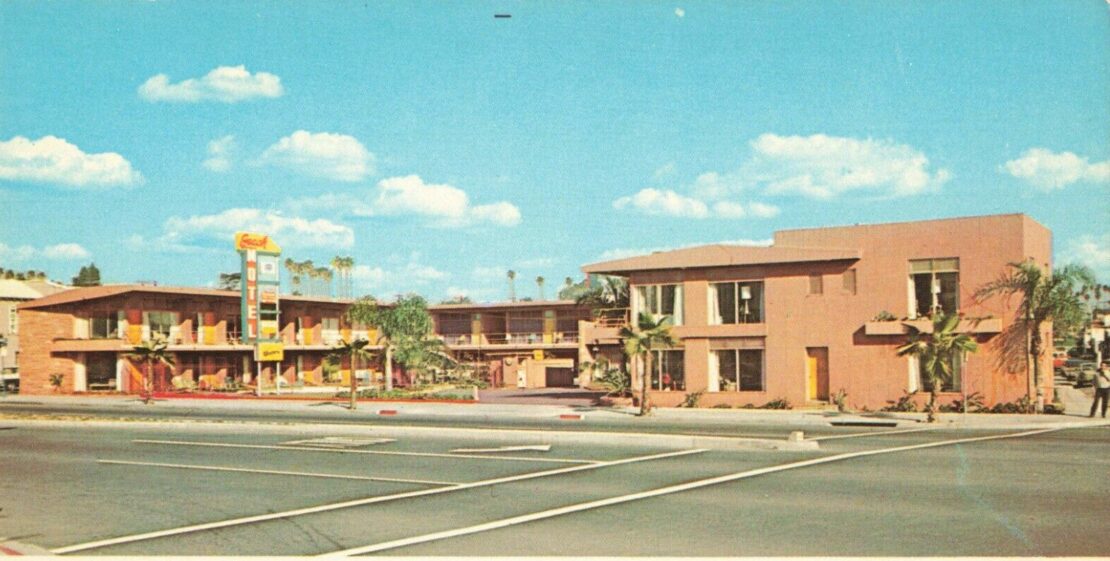 Guertin died in 1970 at the age of 79, leaving the operation of the Beach & Oceanaire Motel in the hands of the family of his daughter Ernestine “Ernie” Pollman, who was an admired, if gruff at times, host. The motel, by that time, was frequently booked by traveling swim teams from clubs and colleges attending meets at the nearby Belmont Plaza pool.

The Oceanaire & Beach Motel was finally closed, a bit past its prime, in 1991, having lost too many potential customers to the glitzier, amenity-packed hotels along Downtown’s Ocean Boulevard, and around Long Beach Airport.

Today, in the beach-facing space that the razed motel once occupied, there are a dozen three-story townhomes that were developed by the Pollman family. The most recent townhome sale closed last month for $1,150,000.

Still, there are remnants of the Beach & Oceanaire Motel extant, and they include three multi-unit properties that are about to hit the market all at once, including the rear addition in its original motel-style state at 18-24 Roswell Ave. It’s now a five-unit set of one-bedroom and studio apartments on the upper level, with parking below at street level. It’s a nice place for a single (or two) looking for a beach pad (or five), with parking, which is a rarity in the Shore. It’s just steps from the beach, and even fewer steps to Chuck’s Coffee Shop. 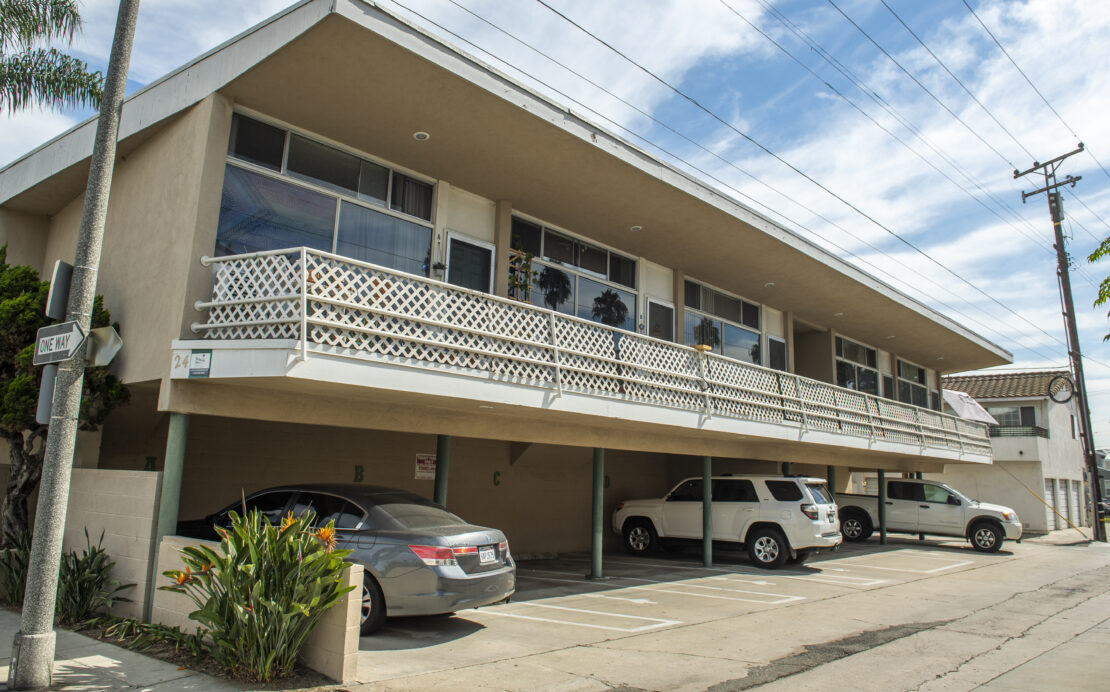 What used to be part of the Beach & Oceanaire Motel is now a five-unit apartment building. Long Beach Monday, Oct. 4, 2021. Photo by Thomas R. Cordova.

A skip up the avenue to 26 Roswell is a lot with two three-bedroom, two-and-a-half bath townhomes, again with plenty of high-value parking. The townhomes, too, were built by the Pollman family after the motel was closed.

Finally, a block to the east at 17 Bennett Ave., is the Pollman family home that the various members of the family lived in while they were operating the hotel. A pair of one-bedroom apartments has been added to the house, making the building a triplex of sorts, though the house is the key feature of this property. 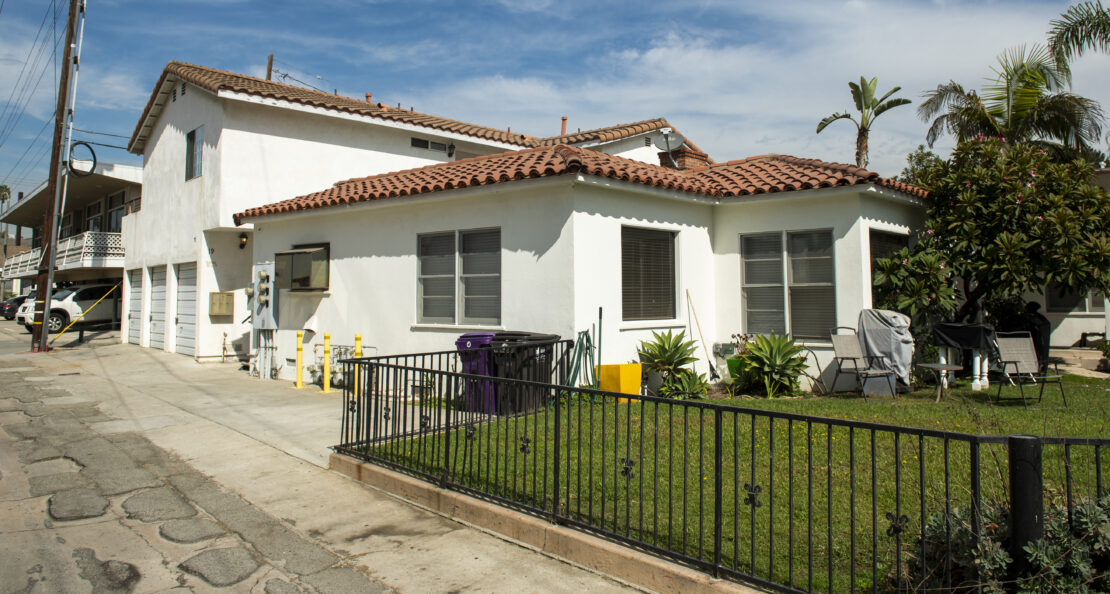 The entire package of properties will be listed soon by Juan Huizar and Caleb Baldwin, of Sage Real Estate and, let’s review. There are the three contingent properties spanning a block in Belmont Shore, with a total of 10 rentable units, all currently occupied, along, or scant yards away from, a vibrant and rapidly improving stretch of Ocean Boulevard. The planned listing prices, according to Huizar, are $1.776 million for the Bennett Avenue triplex; $1.959 million for the 5-unit Roswell Ave. building that’s a vestige of the original motel; and $1.526 million for the townhomes at 26 Roswell Ave. 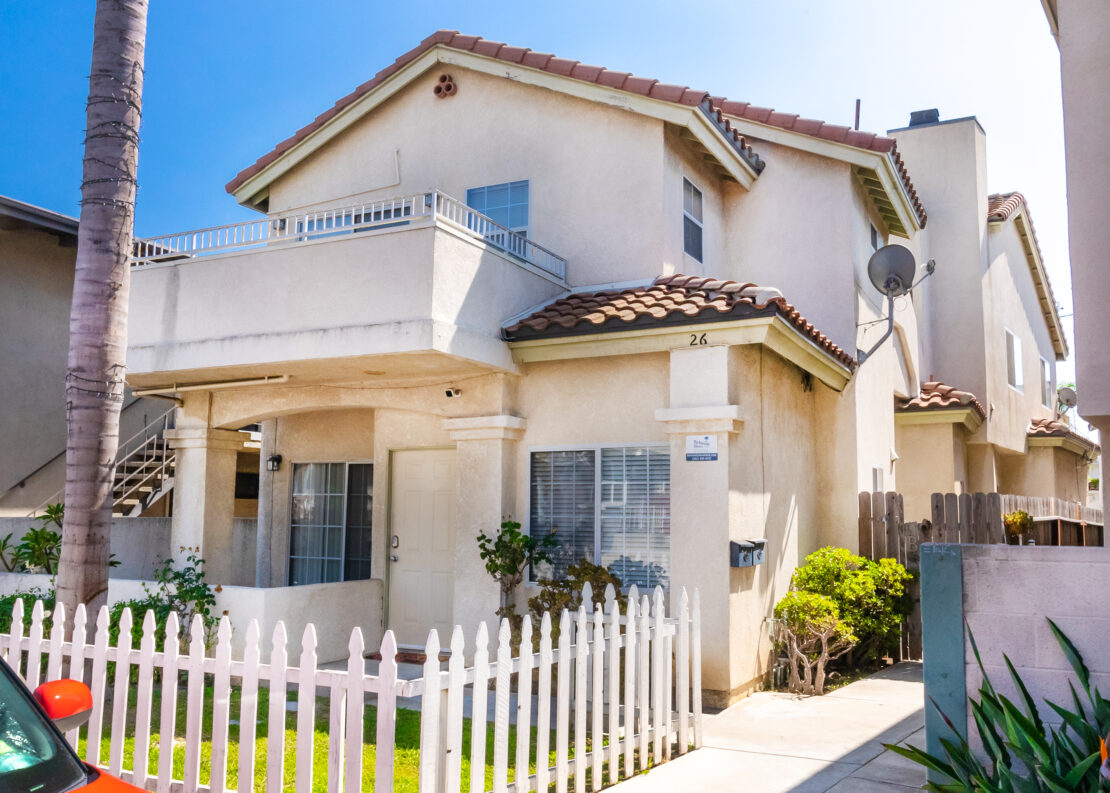 A parcel of two three-bedroom, three-bath townhomes at 26 Roswell Ave. are part of a three-parcel offering by Sage Realty. Photo courtesy of Sage Realty.

They will be for sale separately, but why not collect ‘em all, for a bit more than $5.25 million.

It’s not a far-fetched idea, and both Huizar and Baldwin feel that there’s a good chance they could all get snapped up by one savvy investor.

“Besides the history of the property, I think someone who understands the value of investing in this area with all that’s going on,” said Baldwin, who expects the buyer to be a local investor familiar with Belmont Shore and bullish on its future.

“You’ve got the mayor’s 8 by 28 initiative, which will be bringing a lot of improvements to the area, including a rebuilt Belmont Pier, the new aquatics center, new concession stands and lifeguard towers and everything else that will be needed for the 2028 Olympics, some of which will take place nearby, like sailing, deep-water swimming and triathlon.”

Baldwin predicts that the three-parcel package will be purchased by “an investor who can envision what’s going to be happening down here in just a few years,” and whoever lives—can afford to live—in the area that once was occupied by the Beach & Oceanaire Motel, will be right where the action will be.

Plus, just a short walk to Chuck’s Coffee Shop.