A Signal Hill boy was arrested on suspicion of attempted murder Wednesday in connection to the shooting of a 16-year-old girl last month, according to the Long Beach Police Department.

The boy, whose name and age were not released because he is a juvenile, is accused of wounding the teen girl following an argument in West Long Beach that police said appeared to be gang-related.

The shooting happened at around 11:45 a.m. July 3 in the 1400 block of Magnolia Avenue, authorities said. Police say the teenage girl was setting up for a fundraising event in a parking lot in the area when an argument ensued between her and an unknown number of people.

The argument escalated and at least one person shot her, police said. Authorities arrived soon after and transported the girl to a local hospital where she was treated for gunshot wounds to the upper and lower body.

Detectives eventually identified the Signal Hill boy as a suspect in the shooting. On Aug. 24, the boy was taken into custody during a traffic stop.

No bail was set.

During a search of a residence police say was related to the investigation, officers seized multiple guns, including an AR-15 rifle and a shotgun. Several rounds of ammunition and magazines were also recovered by officers serving the search warrant, police said. 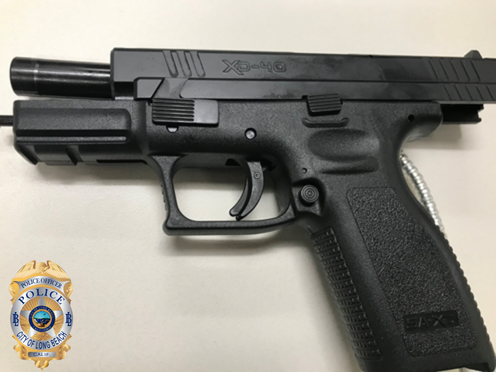 A handgun seized by officers during a search of a residence connected to a shooting investigation. Photo courtesy of the Long Beach Police Department.