A local middle school teacher is on leave from his job after scuffling with Black Lives Matter and anti-racism protesters during a march in Seal Beach on Saturday.

The Long Beach Unified School District launched an investigation after thousands of people watched videos on social media showing the teacher and another man in a small brawl with protesters, which included people throwing punches and hitting each other with sticks.

While it investigates, the district has placed the teacher, Doug Renick, on paid leave from his job at Hamilton Middle School, LBUSD spokesman Chris Eftychiou said.

It’s unclear whether anyone will face criminal charges in the confrontation. Seal Beach police say they’re sorting through hours of drone footage to pass along to the Orange County District Attorney’s office, which will make that decision.

Meanwhile, protesters and Renick are each painting the other side as the aggressor based on short clips of the confrontation swirling on social media.

Protesters say Renick accosted them while they blocked a busy intersection at the beginning of their march. Video from that moment shows him heading toward them before the mayhem ensues.

In an interview, Renick told the Post he was trying to protect the group by ushering them across the street away from cars, but police said their internal footage shows Renick was among a group of counter protesters who were yelling from the sidewalk before he walked up to confront the crowd.

“He basically comes up into the intersection and starts yelling his points of view and screaming just as much as the other side was,” said Seal Beach Police Sgt. Chris Hendrix, who managed the police response to the protest Saturday.

“The whole thing just seemed grossly immature and kind of stupid,” he said of Renick’s actions.

Hendrix said one of the protesters then hit Renick with a stick, but that moment is out of frame on the publicly available video clips. Protest organizer Tia Turner denies this happened, saying Renick started the violence by pushing people and throwing their signs to the ground.

“He instigated it, period,” she said.

Video then shows the small crowd chasing Renick away before there’s a brief tug-of-war over a large stick one protester is carrying. The clip then ends, but other videos show that the clash continued, with a man Renick identified as his neighbor throwing a punch at a woman.

Eventually, Renick and the neighbor ended up cornered and knocked to the ground where they were hit with sticks, kicked and punched, according to Hendrix.

After the beating ends, Renick and another protester share an apparently friendly embrace before going their separate ways, according to Hendrix.

“We hugged it out at the end when I was all bloodied up,” Renick said. A video Renick posted after the incident shows him and his neighbor showing off their injuries and saying they were jumped.

Police said nobody has come forward to pursue charges against anyone else, but Renick said he’s been unfairly targeted on social media with people falsely alleging he drunkenly yelled racial slurs at the crowd. He said someone even photoshopped a stick into his hand in one photo to make it look like he menaced protesters with a weapon.

(The photo is actually just cropped. At first glance, it looks like someone could have tried to crudely photoshop a stick in Renick’s hand, but the uncropped image clearly shows someone closer to the foreground holding it. See the cropped and uncropped images below.) 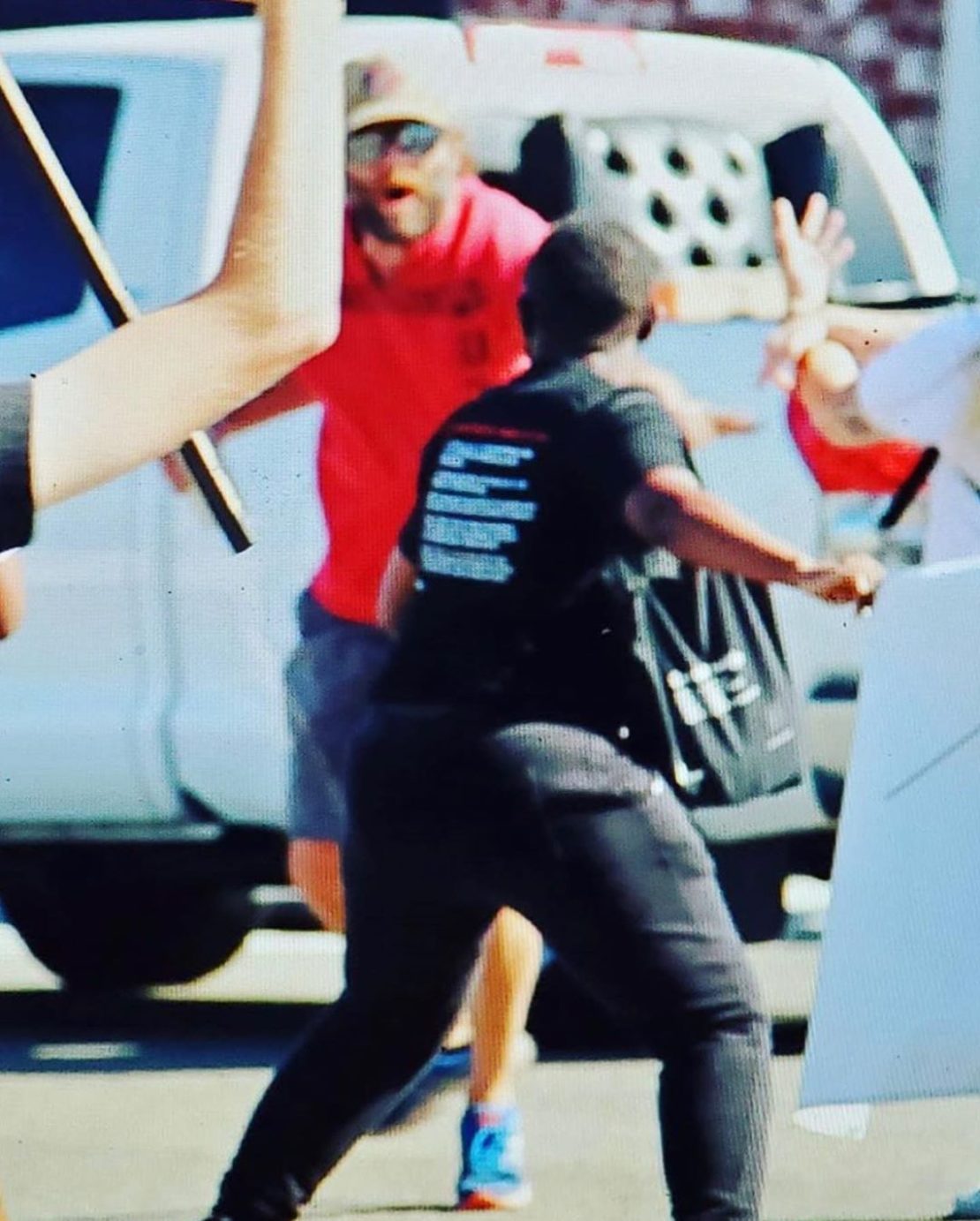 This cropped version of the photo gained traction on on social media. 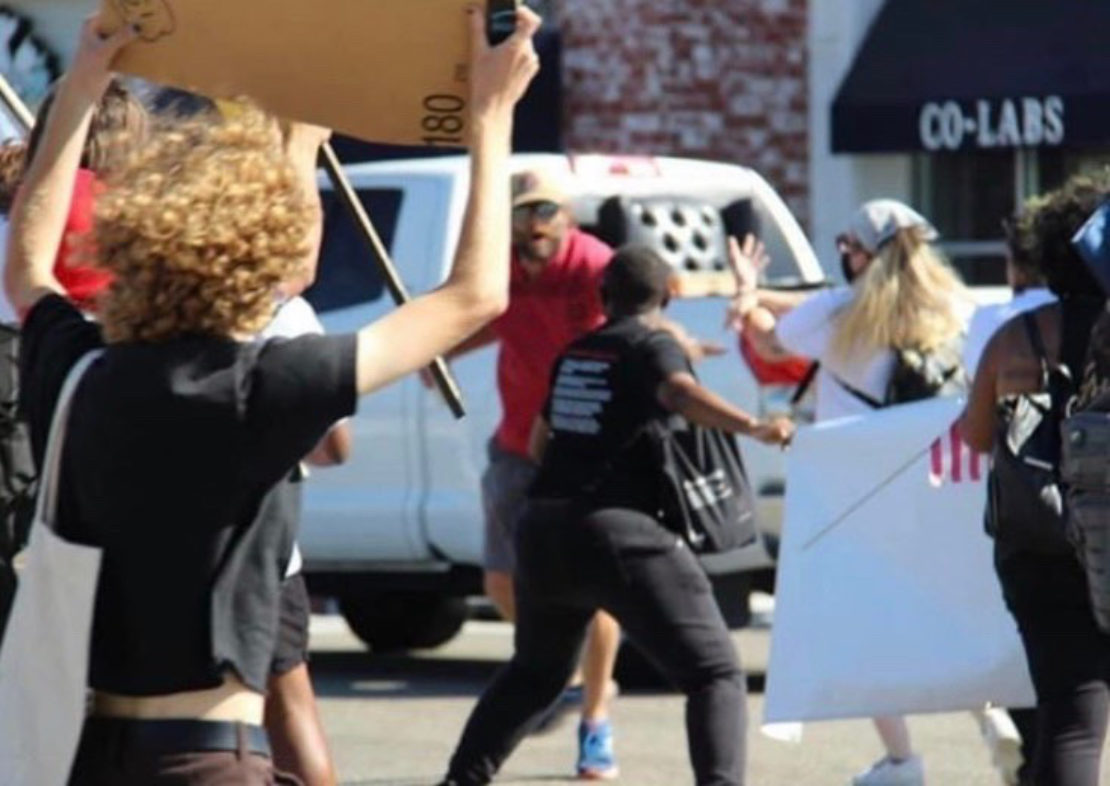 This uncropped image, which shows someone else holding the stick, was also available.

“I’m so wronged in so many ways,” Renick said, adding that he’s trying to set up a meeting with protesters to clear his name.

But according to Turner, who runs the activist group Caravan 4 Justice, Renick’s actions were emblematic of a racist reception protesters received in Seal Beach.

“I felt like I was in Montgomery, Alabama in the 1950s,” she said. Other video clips from that day show people yelling slurs and denigrating protesters.

[Disclaimer: The video below includes profanity.]

One man held a rifle as he watched the crowd go by, according to Turner. Police confirmed this, but said they don’t have evidence of the man committing a crime. He stayed on his own property and it doesn’t appear he pointed the gun at anyone, according to Hendrix.

What the gunman did “was probably dumb, but he didn’t necessarily break the law,” Hendrix said.

Regardless of whether any criminal charges are filed, some activists say they already achieved their goal.

For instance, Renick’s actions were exposed and he’s already suffered consequences, according to Voices of Long Beach, a local protest group and Instagram page that was one of the first to publicize his name.

“Our intent was to not to ‘ruin his life,’ but instead to receive justice, which we already have,” they said in an Instagram message to the Post.