Sixty-five years ago when Long Beach’s most prominent and admired architect Edward Killingsworth designed his firm’s offices on Long Beach Boulevard, he used every tool in his kit to build the workplace of his dreams. It was there in Bixby Knolls where he drew up plans and designs for more than a score of Long Beach homes as well as office buildings, a sizeable portion of Cal State Long Beach (he worked on the master plan for 40 years), and a string of luxury hotels along the Pacific Rim, in Guam, Hawaii, South Korea, Malaysia and Indonesia.

The office of Killingsworth, Brady & Smith Associates represents everything Killingsworth believed in as an architect. It’s a distillation of his finest work—post-and-beam construction, a flat roof, straight lines, an elegant employment of water, and an abundance of glass hospitably inviting sunshine and outdoor plants and trees into the interior spaces. It bears great resemblance to many of his most prominent achievements, including the Frank House and the Opdahl House, both in Naples, as well as the home he built for his family on Virginia Road in Los Cerritos in 1961.

Two years after Killngsworth’s death in 2004, his office was purchased by preservationist architect Kelly Sutherlin McLeod, who had worked with Killingsworth on a couple of CSULB projects, including an unsuccessful attempt to move the historic Tichenor House, built in 1904-05 by the architects Greene and Greene for Ebell Club founder and philanthropist Adelaide Tichenor on First Place and Ocean Boulevard, to a spot on the Cal State Long Beach campus near the Earl Burns Miller Japanese Garden.

After moving her office from Atlantic Avenue to the Killingsworth building in 2002, McLeod had the cherished opportunity to work with Killingsworth for the last several months of his life, and she continued to rent her office there until 2006, when she approached Killingsworth’s widow, Laura (who died in 2019) to renegotiate the lease. Instead, she ended up buying the offices.

“I felt so privileged to have known him and worked with him, and Ed had liked the idea of me taking stewardship of the building,” she said. “And so did Laura.”

And part of that stewardship includes the restoration of the 65-year-old building, which McLeod is undertaking carefully and lovingly.

“We were going to be doing the work a bit at a time because we were all working in the building, but when COVID hit we started working remotely, so I figured I’d have the restoration done while the building is empty,” said McLeod.

Among the major work that needs to be done is replacing the roof, which is currently covered with ductwork for plumbing, electricity, gas and air-conditioning. “It’s quite complicated because the building wasn’t designed to include air-conditioning.” All that apparatus will be moved off the roof and hidden from view, giving the roof, obviously, a cleaner, sharper look as Killingsworth would have intended.” 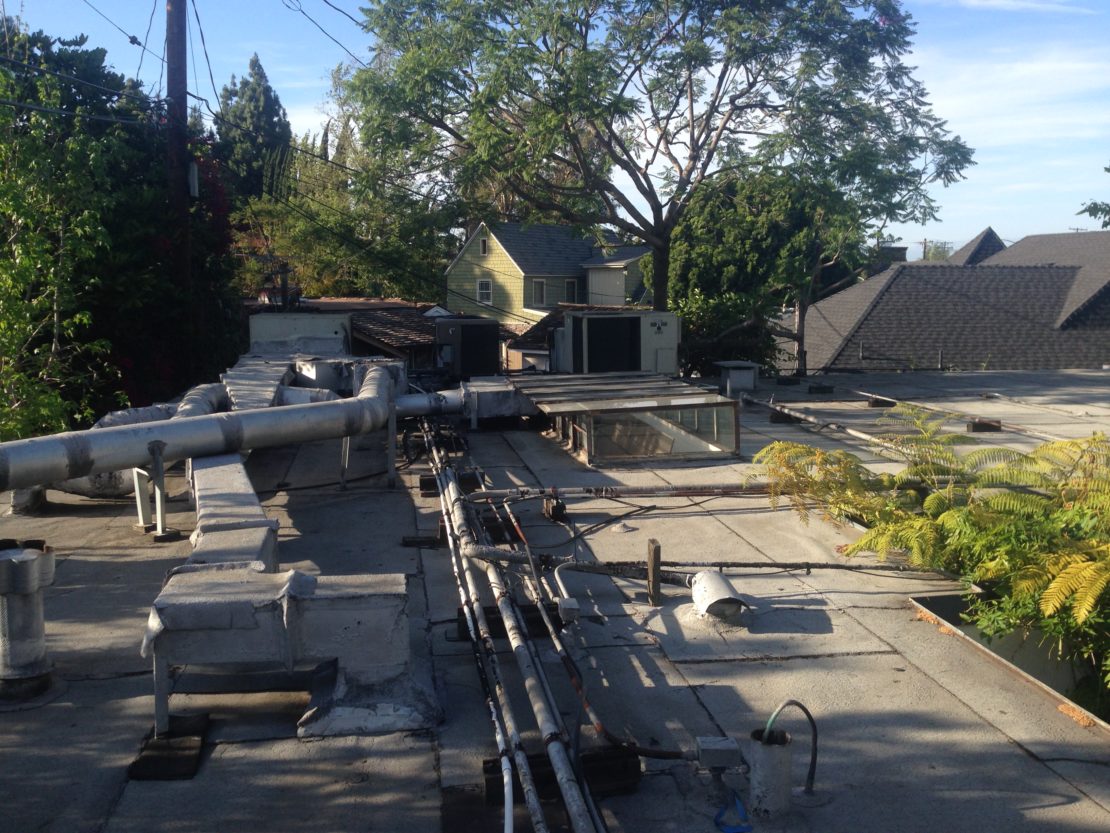 The roof of the Killingsworth office building is loaded with utility ducts and pipes that will be relocated off the roof during restoration. Photo courtesy of Kelly Sutherlin McLeod.

The roof also included seven skylights that are currently corroded and leaking, so those will be replaced, as will the interior sliding doors that have become stuck due to time and the elements.

“The building was passively cooled by opening the sliding doors and letting the breezes flow through,” said McLeod. “We will use those to keep the place cool and only use the air-conditioning when we have to.”

McLeod has a lot of experience with historical restoration work. Her team has won numerous preservation, cultural heritage and architecture awards for their work which has included the restoration of some beautiful Greene & Greene Craftsman residences in Pasadena, including the Gamble House and the Robert Pitcairn Jr. House, as well as the Richard Neutra-designed Hafley House in Park Estates. McLeod has also done some revitalization work on a couple of homes in Bluff Park whose previous owners had let the architecture stray overly far from their Craftsman roots.

With the Killingsworth offices, she says, “We’re strictly doing restoration work. We started maybe a month ago and it’ll probably be another month or two before we’re finished. It’s a restoration project to honor its original design. Ed was there for 56 years so he made some changes over time, but the center portion where his original office was, will reflect what it looked like in 1955.

“I’ll just say it’s a labor of love,” said McLeod. “And it’s worth it. This is a very, very important building.”